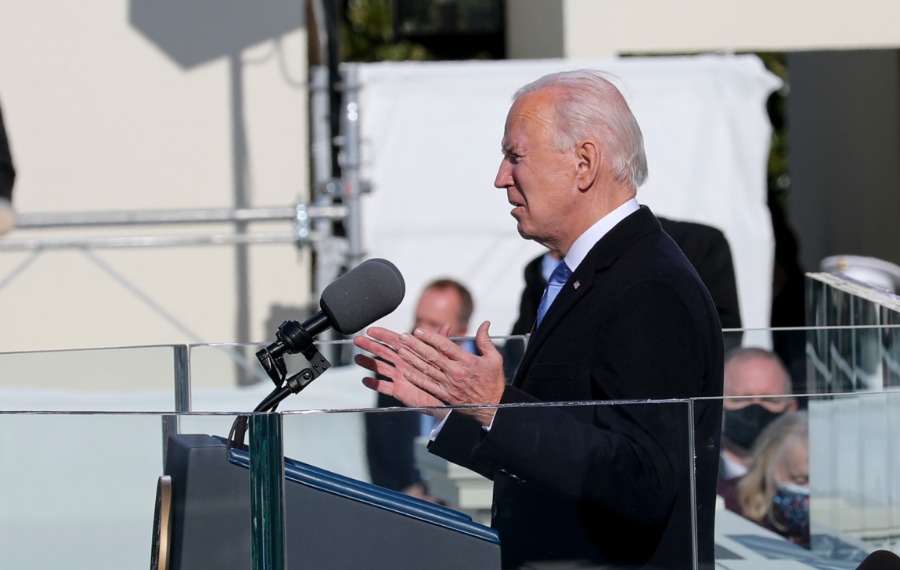 After four years of accusing conservatives of violating the First Amendment by attempting to establish an American theocracy, the conclave of the Christian Left sent the ceremonial white smoke of affirmation through the metaphorical chimneys of our nation’s capital as The Times announced a more “religiously observant” neo-papacy, headed by none other than President Joe Biden, himself.

The Christian Left’s Theocracy and Hypocrisy

No longer identifying as simply Catholic or Christian, Biden’s deeply praised spirituality has adopted qualifiers, such as, Liberal Christianity and Progressive Christianity, proving that the left takes no issue with an American theocracy, as long as democrats are able to exchange the Father, Son, and the Holy Spirit, for the holy Marxist trinity of diversity, acceptance and social justice.

In this America, President Biden’s pro-abortion beliefs are lauded as “steeped in Christian rituals and practices,” while simultaneously Leftists derogatorily refer to Amy Coney Barrett’s pro-life agreement with the Church as “dogmatic.” Contrary to what The Times says, Biden is not only, not “religiously observant” of the Church’s most important moral teachings, he denies them through his policies. In the new theocracy of the Christian Left, such Biblical defiance is not only desired, it is the very definition of devotion.

Forget forgiveness of sins, repentance, and the cross. The new religion of the left initiates its members through forced acceptance of global warming, racism, and pro-abortive child sacrifice. Fueled by a nearly state-run liberal media, the Christian Left holds their new pope’s doctrines, ratified by cowardly executive orders, as infallible and the ultimate expression of not only faith, but science, as they “solve” every problem from poverty to pollution.

To deny their logic — that allows grown men in girls restrooms and invents more than 100 genders — is heretical and will land one in certain “excommunication” from the church of the state through total political and financial cancellation. Severe offenders even risk being refused access to the left’s most divine sacraments, Twitter and Facebook.

This new progressive theocracy considers it perfectly legitimate to be a card-carrying member of the Christian Left and still support anti-biblical ideals, such as same-sex marriage and abortion, despite mountains of biblical evidence to the contrary. For the church of Biden, there are no contradictions here — after all, the archaic mumblings of biblical orthodoxy are no match in their minds for the religiously enlightened dogma of its past saints, like Darwin, Marx, and Obama, as well as the theocracy’s holy mother herself, Margaret Sanger.

Straining a Gnat, Swallowing a Camel

They assert that liberal Christians can not only overlook abortion, but they can celebrate it, because of the plethora of other pro-life issues that the Democrat party addresses, like universal healthcare, the dangers of global warming, and open borders. So it’s perfectly legitimate, they say, to be a progressive Christian and support politicians who are pro-abortion — after all, for the left, Biden’s Christianity is “less focused on sexual politics and more on combating poverty, climate change and racial inequality.”

Forget forgiveness of sins, repentance, and the cross. The new religion of the left initiates its members through forced acceptance of global warming, racism, and pro-abortive child sacrifice.

Except of course, this isn’t true. Politics under Biden and the Christian Left have never been more sexualized, with an outright obsession with genders, a women’s right to choose, transgenderism, and introducing America’s children to drag queens. Apropos of Jesus’ rebuke of the religious and political leaders of his day, the Christian Left are nothing more than “blind guides,” who “strain out a gnat but swallow a camel.” Much like the Pharisees of scripture, today’s progressive Christians are majoring in the minors.

For instance, we have “religiously observant” politicians telling us what light bulbs we can and can’t use, all while neglecting to shed light on the worst injustice imaginable — the senseless slaughter of the unborn — and even worse, all in the name of women’s reproductive rights! Christ-centric Christians know that this logic runs afoul of Jesus and common sense.

In light of an “ascendant liberal Christianity,” true followers of Christ must learn to discern the difference between men who declare themselves gods, and a God who made himself man.

For this reason, a candidate’s position on abortion may very well be the best metric to determine if someone remains true to Christianity, as defined by scripture and natural law, or if they’ve joined the new theocracy of the Christian Left.

Support for Pro-Abortion Politicians and the True Christian

For those who still think it’s appropriate to support pro-abortion politicians, I have a few questions: Would you take the same position if the issue was not abortion but slavery? Would you reason, “There are other freedom issues that are important too, so it’s perfectly fine to support pro-slavery candidates”? Would you deny the moral importance of voting for Abraham Lincoln over Stephen Douglas? Would you gloss over the fact that Douglas not only wants to keep slavery legal, but he wants you, the taxpayer, to subsidize it?

I doubt you would. Like Jesus, you would charge anyone making such a terrible case with “neglecting the more important matters of the law,” and as such, true Christians, whether Republican or Democrat, should do the same in Biden’s America. In light of an “ascendant liberal Christianity,” true followers of Christ must learn to discern the difference between men who declare themselves gods, and a God who made himself man.

Lucas Miles the host of The Lucas Miles Show and the author of the new book, The Christian Left: How Liberal Thought Has Hijacked the Church (Broadstreet Publishing, 2021). He’s on Twitter at @LucasMiles.

Dr. Frank Turek is a faculty member with Summit Ministries, the president of CrossExamined.org and the coauthor of I Don’t Have Enough Faith to be an Atheist. He’s on Twitter at @DrFrankTurek.