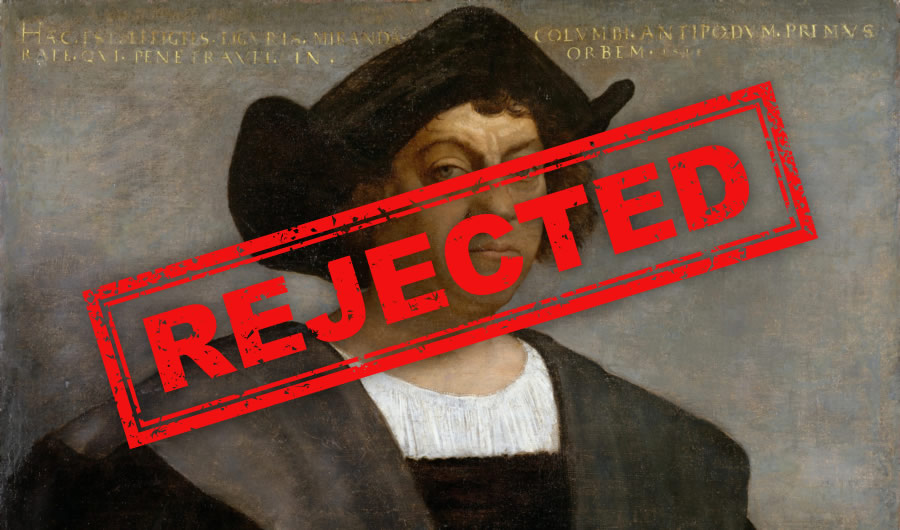 Another Columbus Day is behind us. Again it is obvious that Columbus, a former hero, has been vilified. It’s primarily because of  terrible things that came after he opened up the new world to the old.

Our culture has turned Columbus the hero into Columbus the villain. It’s one of many examples of the ongoing “war on history” of our times.

Columbus Day is no longer celebrated in the “District of Columbia” (named after him), noted Jarrett Stepman. Stepman writes for The Daily Signal (Heritage Foundation). He’s just written a book, entitled, The War on History: The Conspiracy to Rewrite America’s Past (Regnery, 2019).

The book includes this quote from Ronald Reagan’s 1981 Columbus Day speech: “Christopher Columbus … is justly admired as a brilliant navigator, a fearless man of action, a visionary who opened the eyes of an older world to an entirely new one.” It would be hard to imagine hearing a politician today pay such a tribute.

Stepman writes, “Columbus was the unwitting conduit for the creation of a future American Republic, and for that, he deserves our respect and veneration.”

I had the privilege of doing a TV interview with Stepman not long ago. We talked about the “war on history” and the “cancel culture.”

The “cancel culture” views yesterday’s heroes by today’s criteria, then writes them off as unredeemable villains.

Virtually no hero of yesterday is worthy by today’s standards. And, of course, today’s heroes will likewise be canceled one day. The revolution always consumes its own.

Stepman has been writing on this theme of modern iconoclasm toward our heroes for a while. A few years ago, he wrote about how radicals wanted to tear down a statue of Abraham Lincoln … the slaveholder. What?!?

A group of students at the University of Wisconsin-Madison demanded that the on-campus statue of Lincoln be torn down. The reason? Supposedly he owned slaves. The protester-in-chief, a native American, was quoted as saying: “Everyone thinks of Lincoln as the great, you know, freer of slaves, but let’s be real: He owned slaves, and as natives, we want people to know that he ordered the execution of native men. … Just to have him here at the top of Bascom is just really belittling.”

Lincoln, of course, owned no slaves; his presidency freed the slaves. As for the claim of “execution of native men,” yes, Lincoln did order the death of 38 Dakota leaders. But it was only after they’d committed criminal atrocities, massacring 490 settlers, including women and children.

I see this attack on Lincoln as part of the “cancel culture.” So I asked Jarrett, “What’s the purpose of the cancel culture?”

He replied, “In an era in which ‘my truth,’ is prioritized over ‘the truth,’ cancel culture is used to silence those who disagree. It is based on a movement with much fervor and no forgiveness, intolerance in the name of tolerance.”

I then asked him, “If we continue down this road of ‘cancel culture,’ where will it all end?”

“History matters because it puts our lives and times in context, it teaches us how other human beings dealt with the flawed and imperfect world they lived in.”

Stepman answered, “It doesn’t end if we don’t reverse course. Cancel culture is meant to silence anyone who disagrees, who is on the ‘wrong side of history,’ as they perpetually redefine that. That mentality, if it becomes the norm, can’t exist side by side with a culture that supports free speech.”

I also asked him, “Why does history matter?” He said, “History matters because it puts our lives and times in context. It teaches us how other human beings dealt with the flawed and imperfect world they lived in. It teaches us about human nature. If we erase our history we will soon have no past and no future.”

I also spoke recently with Dennis Prager on this same theme of why history matters. He told me,

The American past is [being] erased, except for the isolated awful moments. Kids today are learning how bad America was, but they’re not learning that every country had slavery, every country killed indigenous people, because everybody who made a country often killed the people who were living there. I’m not excusing it, I’m just noting a fact. Where America differed is in its goodness. Badness is universal, goodness is relatively unique.

Stepman concludes in his book on the war against history, “If our country cherishes its past as it looks to its future, it will produce more Americans who deserve to be celebrated as greats. … But if our country foolishly commits to erasing its history, it will have no future worthy of its past.”

I think Christopher Columbus would agree.