Poland Guards Her Borders With Prayer

Poland has already saved Europe twice. Will it lead the defense of the West today? 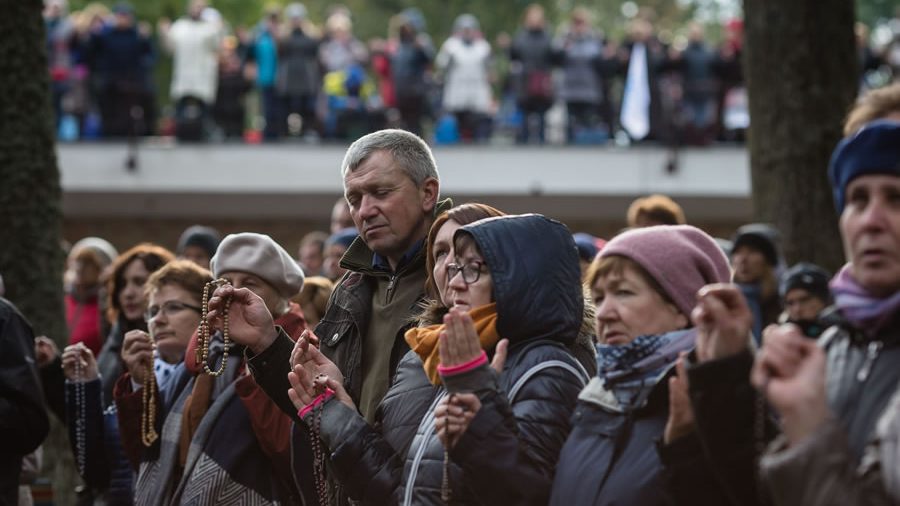 People take part in a mass rosary prayer, begging God 'to save Poland and the world' from dangers facing them, in Koden Sanctuary, eastern Poland, on the banks of the Bug - a border river between Poland and Belarus on October 7, 2017. Thousands of Polish Catholics joined hands in human chains on their country's borders for the 'Rosary to the Borders.'

Here’s a news report that might at first puzzle the average American Christian reader:

On Saturday, the feast of Our Lady of the Rosary, thousands of Polish Catholics gathered along their country’s border to pray for peace, as well as for the future and salvation of Poland and the world.

The event, entitled “Rosary at the Borders,” was organized by a lay movement called the Solo Dios Basta Foundation (God Alone Suffices). It was supported by the Polish Bishop’s Conference and was sponsored by several state-owned companies. Approximately 90 percent of the country, beloved home of the Polish Pope St. John Paul II, identifies as Catholic.

According to the New York Times, participants gathered for prayer at 320 churches near the border of Poland as well as in 4,000 designated prayer zones.

The prayers took place on the feast of Our Lady of the Rosary, which also commemorates the anniversary of the Battle of Lepanto, during which Mary, through the prayer of the rosary, is credited for a key victory against the Ottoman Empire.

The Battle of Lepanto, on October 7, 1571, stopped Turkish fleets from dominating the Mediterranean. It broke their massive trade in kidnapped Christian slaves. (Read G.K. Chesterton’s magnificent poem on the subject.) The Christian powers of Venice, Genoa, and Spain that led the fight credited the victory to the power of prayer. The battle’s anniversary has been a Christian feast ever since. The Rosary is a scripturally-based prayer and series of meditations on the life of Christ and the early church.

Now Poland faces an equally threatening, but far more insidious enemy of the West: An EU which cut from its constitution any mention of Christianity’s role in Europe’s history.

Borders Are Godly, So Ask God to Protect Them

But why gather along the country’s borders? Why not just go into churches? Because Poland’s borders have been so often invaded, redrawn, and even erased by powerful neighbors. And that’s now in danger of happening again. That is, if the European Union has its way. The secular oligarchs of the anti-democratic EU have been bullying Poland’s elected government for years. First they demanded that it legalize abortion. Then they told the Polish government that it couldn’t purge its courts and state media of Communist holdovers. Now the EU is threatening Poland (along with Hungary, Slovakia and the Czech Republic) with crippling sanctions if it won’t accept thousands of Muslim colonists.

And the Poles are pushing back. Aware that (as usual) they are the underdogs, they’re imploring God for help.

Those of you who remember the 1980s knew Poland as a brave and lonely warrior against an empire of evil. Now it’s fulfilling that role again. It seems to fall to the Poles to save the rest of Europe, over and over again.

First in 1683, it was Polish king John Sobieski who swept in at the 11th hour to lift the Siege of Vienna. Without him, Islam might have conquered and enslaved Western Europe. It already had done so to the Christian Middle East, the Byzantine Empire, and much of Southern and Eastern Europe.

Poland got little thanks for that. Within 100 years its voracious neighbors had exploited Poland’s weak constitution to dismember the once-great country. It disappeared from the map, and wouldn’t reappear until 1918.

Within just two years, Poland would have to save Europe from another horde of totalitarian zealots. This time it was the Soviet Red Army. It was plowing through Poland en route to conquer a fractured, chaotic Germany. The Iron Curtain might have fallen 40 years sooner. It might still not have lifted today, if Poland had failed.


Please Support The Stream: Equipping Christians to Think Clearly About the Political, Economic and Moral Issues of Our Day.
But the nation rallied at the Battle of Warsaw in August 1920. Outnumbered Polish forces faced down the fanatical Red Army. They were buoyed by a vision that thousands of Polish soldiers saw over the battlefield. They swore that it was Mary, the Mother of God. Since the battle occurred on one of her major feast days (the Assumption), and since for centuries Poles had called her the “Queen of Poland,” skeptics might attribute this to suggestion. Whatever it was, the battle and the vision merged in the minds of Poles as the “Miracle of the Vistula.” The Poles threw back the Soviets, preserving the country’s fragile independence, and shielding all Europe from invasion by intolerant atheist tyrants.

The secular oligarchs of the anti-democratic EU have been bullying Poland’s elected government for years. First they demanded that it legalize abortion. Then they told the Polish government that it couldn’t purge its courts and state media of Communist holdovers. Now the EU is threatening Poland (along with Hungary, Slovakia and the Czech Republic) with crippling sanctions if it won’t accept thousands of Muslim colonists.

Poland didn’t have peace for long. By 1939, two equally wicked totalitarian empires, Hitler’s and Stalin’s, were again planning to carve up Poland. In a brutal joint invasion, those allied socialist countries overwhelmed the lonely republic. It waited in vain for promised French and English support. But it was at least the Poles’ treaty with England that forced the Allies to stop appeasing Hitler, and build up forces to slow down the Nazi war machine. Throughout the war, thousands of Polish pilots and soldiers, escaped to Britain. They fought on the front lines. Meanwhile, brilliant Polish mathematicians helped break the Nazi’s war codes, dooming its submarine starvation blockade of Britain.

Watch this powerful video, with Sean Bean of The Lord of the Rings, depicting Poland’s struggle:

Then of course, in the late 1970s, it was in Poland that the first free labor union in Eastern Europe began, the Catholic-inspired Solidarity. A Polish pope and Polish dissidents awakened workers throughout Eastern Europe. That helped spell the end of Soviet-backed tyranny in half of Europe. (See Paul Kengor’s Stream series on how St. John Paul II and Ronald Reagan worked together to make that happen.)

Now Poland faces an equally threatening, but more insidious enemy of the West: An EU which cut from its constitution any mention of Christianity’s role in Europe’s history. The EU is importing millions of Muslims whom Muslim countries won’t accept. The fig leaf that these are refugees from Syria’s winding down civil war has fallen away. These are at best economic migrants. Some 90 percent (in Germany, for instance) end up on welfare rolls.

At worst they are colonists for sharia. One of the key demands of Islam is this: That believers embark on migration (the hijra) to spread the faith into new territories, imposing it on the “unbelievers” (kuffar). The wave of crime, terrorism, and abuse of women and Jews that has swamped Western Europe has spared nations like Poland, which said no to the influx. And the godless, childless leaders of the European Union now demand that Poland open its borders.

Facing Down the European Soviet Union

Poland is standing strong. It has resurrected the issue of the vast destruction that Germany caused in its unprovoked invasion of 1939. If the German-led EU imposes sanctions on Poland, Poland will sue for all the death, devastation, and looting that Germany never paid for. President Trump offered strong support for Poland in his landmark Warsaw speech this past summer — which outraged liberal commentators and alarmed the EU’s leaders.

More important than political gestures, the Poles are awake and they’re praying. They’re invoking the same force that saved Poland (and Europe) so many times in the past. Let’s join our prayer to theirs, for our nation, our civilization, our churches and our children.