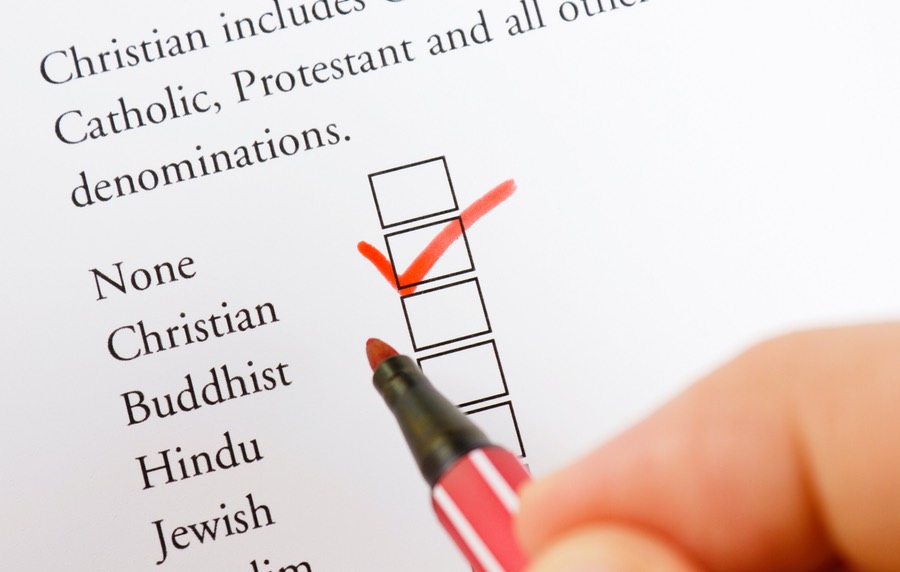 Pew Research Center has just released a new survey:“In U.S., Decline of Christianity Continues at Rapid Pace.” It looks bad. Over the past decade, the number of people who identify as Christians has dropped from 77% to 65%. The “nones,” those who claim no religious affiliation, have increased from 12% to 17% in that time.

What’s really declining here, though? What’s continuing to drop, in particular? Pew’s been talking about the “rise of the nones” since at least 2009 — but is Christianity going away? No. Just nominal Christianity.

Research in 2015 by Ed Stetzer and Lifeway Research showed that (among Protestants, at least) the decline was almost entirely explained by nominal Christians who’d given up claiming any religious affiliation at all. The number of Protestants attending church regularly had declined modestly, from about 23% in 1972 to about 20% in 2014. Self-identified evangelicals, though, had actually shown strong a strong increase in church attendance over that period.

Again in 2017, a pair of sociologists published a study titled “The Persistent and Exceptional Intensity of American Religion: A Response to Recent Research.” Glenn Stanton quoted them in his Myth of the Dying Church:

“Rather than religion fading into irrelevance … intense religion — strong affiliation, very frequent practice, literalism and evangelicalism — is persistent , and in fact, only moderate religion is on the decline in the United States.”

Only “moderate religion” was declining. Do you think that’s changed much in the past two years? Not likely. Even in this most recent Pew study, those who say they’re Christians attend church at rates virtually identical to 2009.

So no, truly committed Christianity isn’t dying in the U.S. But the rise of the “nones” still matters — greatly. For it’s one of the clearest signs of our polarizing society. That polarization is what’s on the rise. And it’s troubling.

It was already growing quickly four years ago, when I called it “The Rise of the Nones and the Collapse of the Middle.” The “middle” consists of nominal Christians, a group that once existed in large numbers. They went to church because it was respectable; and by attending, they in turn gave the faith social respectability. That “middle” served as a bridge and a buffer between committed Christianity and committed secularism. Year by year now, however, that buffer is disappearing.

It looks like we’re heading toward even greater polarization.

This is hardly news to anyone who’s paying attention. Christianity’s social respectability is fading; in fact, in many circles it’s gone completely. You see it in attacks on Christian symbols in public places, but even more in outright legal and economic assaults on Christian sexual ethics.

Going to church once meant you were one of the “good people” in town. Powerful interests on the other side of today’s polarizing society now want to make Christian belief a mark of bigotry and hate.

This has political effects as well. Fully one-third of Democrats are “nones.” Half that many Republicans are unaffiliated with any religion. Almost 80% of Republicans say they are Christians, compared to 55% of Democrats. Significantly, for the first time fewer than half of Hispanics now identify as Roman Catholic.

And it has a generational impact. As Stanton reports in The Myth of the Dying Church, Christian commitment is still (surprisingly) as strong among youth as it’s ever been; maybe even stronger. But more young people by far claim no religious affiliation — 40% of Millennials, compared to one-in-six Boomers and 10% of those born before 1945.

Thus it looks like we’re heading toward even greater polarization, as the younger cohorts grow up and replace the older.

So in sum, this latest Pew research has troubling news for American Christianity — but it’s not troubling in the way they want to say it is. Nominal Christianity is declining, but it’s not likely that committed belief is shrinking. The buffer between committed belief and committed anti-belief is vanishing instead. We’ve already seen the effect of it in the growing clash between believers and secularists. We can probably expect that conflict to keep going and growing.

Yet the good news is still good news. Real Christianity is as strong as ever in the U.S. (and growing in much of the rest of the world, but that’s another story). The decrease in nominal belief here means a refining of true belief. We can expect the rise in anti-Christian hostility to have the same effect. It only leaves one question for those of us who follow Jesus Christ: Are we building our faith today for what it may take to follow Christ tomorrow ?