In advance of Friday’s March for Life, Charlotte Pence Bond joined pro-life leaders to offer insights and motivation to the next generation of pro-life advocates. 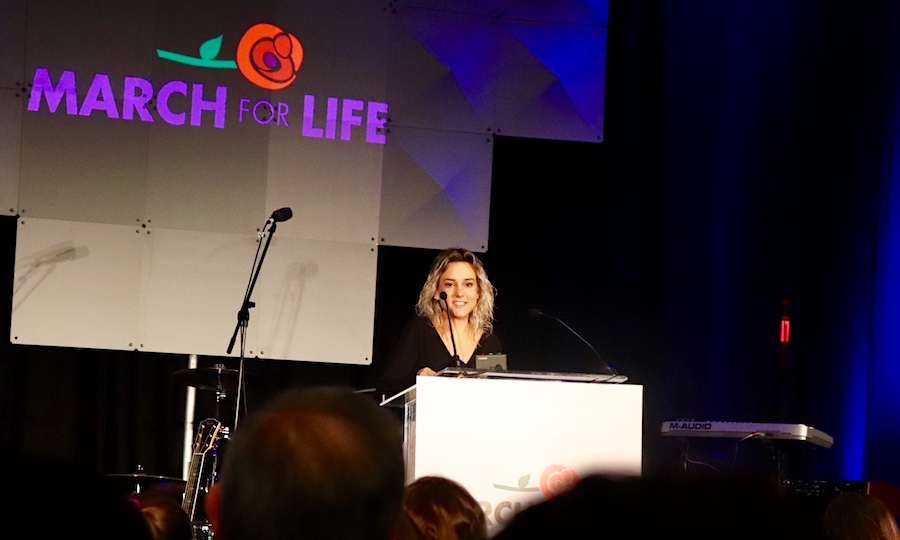 On January 23, 2020, Charlotte Pence Bond addressed thousands of students at the March for Life Youth Rally at the Renaissance Downtown Hotel in Washington, D.C.

“Anyone who has made a difference in the history of the world wasn’t popular at the time,” said Charlotte Pence Bond on Thursday, speaking to the March for Life youth rally. “Today, you are not the in-crowd and talked about well in mainstream media.”

The daughter of Vice President Mike Pence, she addressed an estimated 2,000 high college and college students packed into a hotel ballroom in Washington, D.C.

Attendees at the March for Life Conference came from all 50 states. With short speeches simulcast online, medical and policy experts among other pro-life speakers revealed the meaning of this year’s theme: “Life Empowers.”

“The whole idea of being pro-choice is a lie,” said Abby Johnson, founder of Pro-Love Ministries and a former Planned Parenthood director. “Women walk into abortion facilities almost 2,400 times per day and have abortions because they feel like they have no other choice.

“It is only the pro-life, pro-love movement that is actually giving women choices.”

The conference was held one day prior to Friday’s peaceful protest on the National Mall, where President Donald Trump will give remarks alongside pro-life leaders.

Many conference attendees came with their own considerable experience. Janaya Fulk, soon to graduate from Colorado Christian University (CCU), said she volunteers at a local pregnancy resource center in Lakewood, Colo.

“What a lot of people miss is that we’re not judging those women,” said Fulk in an interview. “We take them by the hand and support them. We say, ‘Look, if you go on with this situation, you are not alone. You do have a choice but understand that this is wrong.’

“No matter what, we will continue to love you, hold your hand, and speak up for that life.”

Fulk and her friends cheered as Bond was introduced as the surprise keynote speaker to students.

“What are the reasons I am pro-life?” asked Bond. “It’s not because I was raised in a Christian or conservative household. It’s not because my dad is Mike Pence and has been a staunch pro-life advocate for his entire career.”

Bond, 26, had been married only three weeks prior. Her and Naval officer Henry Bond’s wedding ceremony on December 28 had been kept secret until afterward.

“The world won’t change unless we tell people what we believe,” said Bond. “[Then] we open up a space for other people who disagree with us to debate us.”

“Anyone who has made a difference in the history of the world wasn’t popular at the time.

Know why you believe what you do, other than simply that abortion is wrong”

Currently pursuing a career in screenwriting, Bond recounted the lead-up to the 2016 presidential election. She revealed that she had helped her father prepare for the Vice Presidential Debate against Senator Tim Kaine.

“My dad made the powerful point that a society can be judged by how it deals with the aged, the infirm, the disabled, and the unborn,” said Bond. “When he [spoke] up with compassion and kindness, he did so in a way that can change minds. You have the power to do that.”

The young women of CCU resonated with her words.

After bringing a group of 27 students last year, the evangelical Christian college had nearly 200 come this year. Law student Katie McTavish said they desire to be activists not slacktivists.

“Slacktivism is taking a passive role,” said McTavish. “How I shift to pro-life action is on the battlefront of ideas, in conversations. The truth is that this is a life and it matters. Believing that abortion is okay and this is not a life, that’s a false narrative that cripples women.”

Moments later, Christina Marie Bennett took the stage to share her personal story. She recounted how her mother, when pregnant, had been shunned even by her church.

“My mom’s mentor told her, ‘Because you are pregnant out of wedlock, that’s a sin. There is no place for you and you are not allowed to come back,’” said Bennett.

“So she never went back to that church. It drove her to a hospital to get an abortion.”

Upon arriving, Bennett suggested a supernatural intervention may have saved her. “There was this woman — woman, angel, janitor, we don’t know,” she said. “But she was an elderly African American woman who was in the hallway and saw my mom crying.”

The figure asked the pregnant woman: “Do you want to have this baby?” The young mother nodded. “Then God will give you the strength to have this child.”

Bennett’s mother walked out of that medical facility. Today, Bennett works at Family Institute of Connecticut and has shared her story in national media.

Called to Stand Up

Over the past ten years, the March for Life has increasingly been comprised of activists who are younger — with a greater diversity of ethnicities and backgrounds.

Yet Bennett also alluded to how it remains a gathering with white Catholics in the majority.

“Many times, as a pro-lifer, I have been the only person of color in a room,” said Bennett. “If you are a person of color in this room — if you’re black or Latino or Asian or Indian, whatever you are — I want you to know that you have a place in this movement.”

The young African American woman continued: “God has a purpose for us in this movement. We’ve been targeted by Planned Parenthood and the abortion industry. I believe God is going to use us to overturn Roe v. Wade and create a culture of life.”

“Do not be afraid. God put in your spirit the strength of a lion. You can turn this around.”

The March for Life on Friday, January 24 at noon (Eastern time) will be simulcast online.