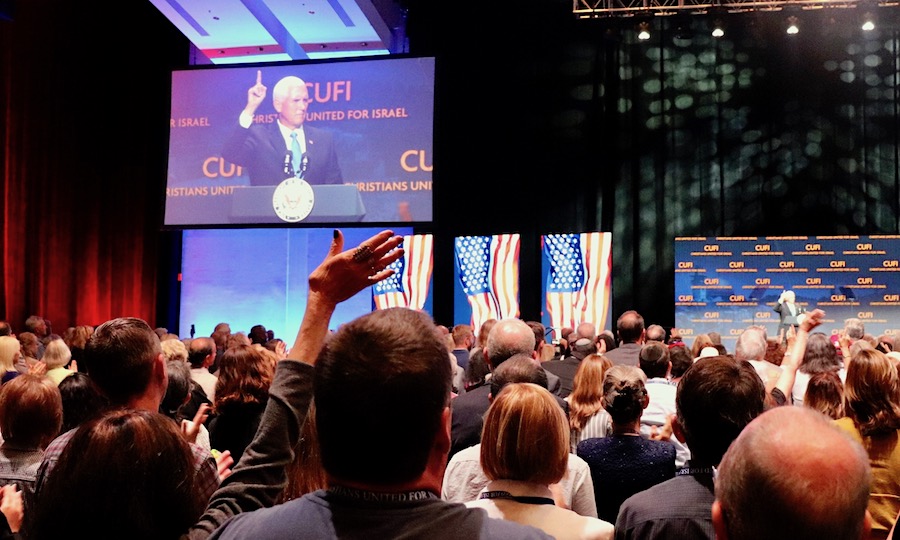 On a morning when the nation’s capital city faced record rainfall, an outpouring of emotion drenched a national summit convened in solidarity with Israel.

More than 6,000 pastors and leaders gathered at the Washington Convention Center for the 14th annual Christians United for Israel Washington Summit.

Hailing from every U.S. state and over a dozen countries, they heard from national leaders on current threats to Israel and how they can support the Jewish people.

“We’re more than allies,” said keynote speaker Vice President Mike Pence. “The United States and Israel are family, descended from a common tradition of faith. Since the founding of this nation — a founding we just celebrated a few short days ago — the people of Israel have been at the very heart of the American people.”

Outside, heavy rain fell from a cloudburst. A few dozen protesters from Code Pink and other liberal groups held signs with messages such as “We Boycott Until Palestine is Free.” They staged a sit-down strike and attempted to breach the convention premises.

Some protesters bought convention passes. During various speeches, at least four of them stood up shouting slogans and waving signs. To drown out the disruption, the crowd of believers chanted “Israel lives!”

As security escorted a protester, Pence cracked to the audience: “Welcome back to Washington, D.C.”

Confronting Hate — At Home and Abroad Known for his evangelical faith, Pence has a long history with Christians United for Israel (CUFI). He traveled on a CUFI trip to Israel in December 2014.

“We [saw] to it that America would no longer allow the United Nations to be a forum for invective against Israel,” said Pence.

Over $300 million in annual U.S. funding was cut to the U.N. Relief and Works Agency. Other nations have since covered this funding gap.

“All over the world, anti-Semitism is on the rise,” said Pence. “You see it on college campuses, in the marketplace, and sadly, even in the halls of Congress.”

Jewish voices on both sides made a case for their views.

Rabbi Yisrael Weiss served as a spokesperson for the small protest group. He founded Jews United Against Zionism, based in New York.

“Anti-Zionism means, of the 220 nations on earth, you think one does not have the right to exist,” said Prager. “Zionism is simply the move of Jews back to Zion after 2,000 years.”

Outside, protest signs proclaimed their support of the boycott-divest-sanctions (BDS) movement. “We support anything and everything that will bring the speedy dismantlement of this occupation,” said Weiss, referring to the State of Israel.

“BDS [means] you want to economically choke only one nation on earth,” countered Prager. “It’s so obviously just anti-Jewish. And being anti-Israel and anti-Christian are all part of a package deal.”

Without naming her, he referenced comments by Rep. Alexandria Ocasio-Cortez (D-N.Y.) The freshman member recently referred to immigration holding facilities in Texas near the U.S.-Mexico border as “concentration camps.”

During World War II, six million Jews and countless others targeted as “undesirable” by the Nazi regime were killed in forced-labor camps with gas chambers.

“We must never allow the memory of those lost in the Holocaust to be cheapened as a cliché to advance some left-wing political narrative,” said Pence. “[It] is an outrage. The Nazis took lives. American law enforcement save lives every day.”

Pence spent nearly a third of his speech discussing immigration and border policies.

“The Most Pro-Israel Administration in History”

Similar to Pence, Pompeo emphasized the pro-Israel record of the current administration.

“President Trump [is] an immovable friend of Israel,” said Pompeo. “His commitment is the strongest in history. It’s been one of the best parts of my job, to turn that commitment into real action.”

Both leaders cited two moves as indicative of where the Trump administration stands.

Last year, the U.S. moved its Embassy in Israel from Tel Aviv to Jerusalem. Only months ago, the U.S. stood with Israel as the nation claimed its sovereignty over the Golan Heights.

“We’ve cut off billions in funds that the Islamic Republic of Iran’s leadership would have used for various nefarious purposes,” said Pompeo. “— Not the least of which would have been their efforts to destroy the state of Israel.”

The U.S. has also maintained four billion dollars in annual security assistance to Israel. Pence noted a higher purpose beyond supporting an ally has been at work.

The Trump administration has been working on a comprehensive Israeli-Palestinian peace plan. Further details are expected to be announced before year’s end.

“A lasting peace can only be built on a foundation of truth,” said Pence. He proceeded to quote Psalm 122. “So we pray for the peace of Jerusalem, that those who love her will be secure. And even as we pray, we will work for peace.”

Watch the keynote speech from Vice President Pence below. Explore The Stream’s complete coverage of Israel, and sign up to receive top stories every week.

A graduate of the University of Colorado, Josh M. Shepherd covers culture, faith, and public policy issues for media outlets including The Stream and The Federalist. Find him on Twitter and Facebook.