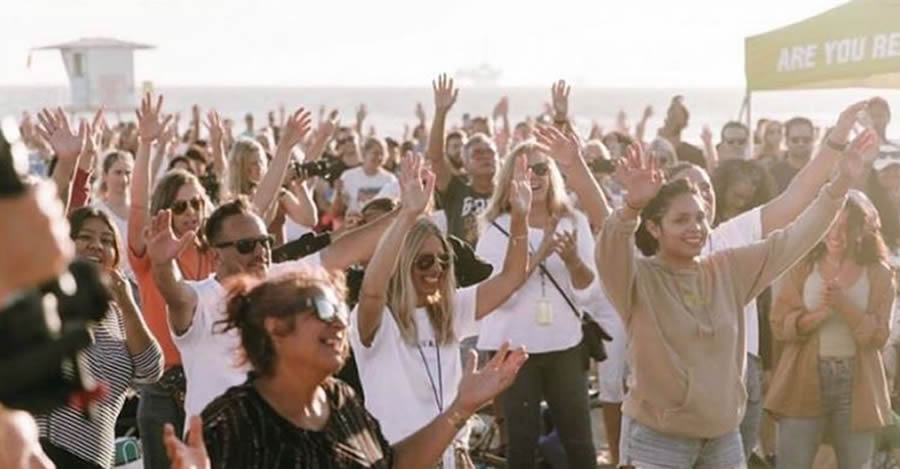 Close to 400 people showed up to worship God at a service held on California’s Golden Gate Bridge last week in protest of Governor Newsom’s order to stop singing and chanting at houses of worship. Bethel Church’s worship leader, Sean Feucht, hosted the event as part of a movement he started called “Let Us Worship.” The movement was originally founded as a response to social media censorship of worship services that he led in what he called “places of trauma.”

Following the murder of George Floyd, Feucht and other pastors went to Minneapolis and St. Louis to pray and lead worship outdoors. They posted videos of the events on Instagram, which were quickly censored. Instagram stated the worship videos were “harmful” and didn’t meet their community standards. “Basically, they are blocking … any narrative except the one they want to push, which is strife, rioting and violence. And they wouldn’t cover the fact that people are coming together in these places of trauma and they’re bringing hope and bringing healing and bringing a restoration and reconciliation.” He said it got his group “fired up” to take a stand. So did Newsom’s ban on singing.

Feucht told The Stream that Newsom’s order to silence worship was hypocritical. “I would say [it is] hypocritical at best, given the fact that the state government largely endorsed the mass protest that included tens of thousands of people, and also included a lot of chanting and a lot of yelling. And I wasn’t against those, but I am against the hypocritical nature of not allowing the church to meet.”

So Feucht started  “Let Us Worship.” The “Let Us Worship” petition has already been signed by over 20,000 people. Now Feucht is heading to the Nation’s Capitol. “I’ll be going to DC as we continue to mobilize against this infringement of religious liberties.” While there, he will meet with several U.S. Senators. In addition, Feucht is mobilizing moments of worship in specific and strategic places, like the one at the Golden Gate Bridge.

Twenty police officers showed up at the Golden Gate Bridge worship service last week. At first, the group was concerned that they were there to shut the event down. But they weren’t. “They ended up blocking off a whole lane of traffic on the Golden Gate Bridge to enable us to worship freely.” Some of the police officers at the bridge were on suicide watch — they were there to prevent suicides. Since COVID-19 started, many people have jumped to their deaths. When the police officers found out that Feucht was hosting a worship service, they were relieved. “They said, ‘Oh, we need this on this bridge.'” He added, “We felt like it was really significant for us to be there. And I’m really, really thankful that these officers saw the importance of worship.”

The next day the group gathered at Huntington Beach in Orange County, Cal. for Saturate OC. “We had … probably over 1,000 people at the beach in Huntington Beach. And we worshiped and preached the gospel.” Dozens were saved and 30 were baptized that day. “It was just a really special time.” Co-organizer and founder of Saturate OC Jessi Green told the crowd,”The church has left the building!”

Overall, the worship services have received positive reactions, not only from local people, but some in the media as well. The only real pushback Feucht has received has been from Christians posting online. “They’re just complaining about masks and [the] social distance thing. And I just find it kind of interesting that people are getting healed, saved and delivered, and their first thought is, well, ‘some people don’t have masks on.'”

‘The Church was Born for This’

Feucht said that these challenging times are reminiscent of the late sixties and early seventies. “I feel like we’re on the verge of another Jesus People movement and awakening, but I believe it’s going to take bold leadership from the church to get us to where God’s calling us to go. So I think now’s the time for bold leaders to rise up.” He added, “You know, our heart is just for people to see that we’re in really trying times, but the church was born for this.”

Feucht, along with pastors and faith leaders, will be traveling to Connecticut, New York and New Jersey to conduct worship events before heading back to California. They’ll then travel around California doing the same. Feucht says they need prayer for protection, guidance, open doors, favor, and resources as they travel. “Right now, we just feel like we’re just called to do this, go wherever He’s telling us. So we’re just trusting the Lord for those kinds of things.”