What Paul Would Say to Matthew Vines 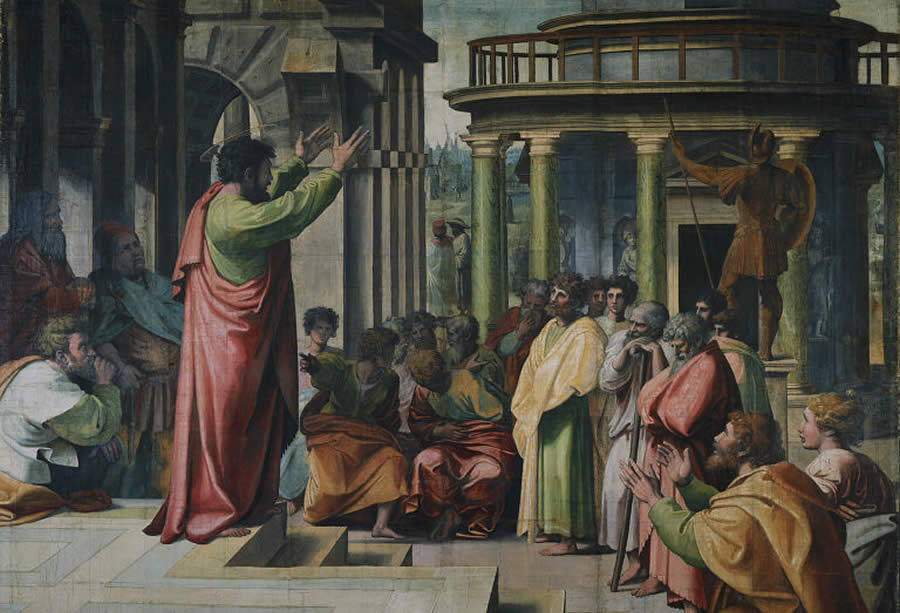 My friend tweeted the two messages without comment, but I knew she was making a point. Responding to another friend, the Acton Institute’s Joe Carter, a Matthew Vines declared:

@joecarter If Paul were alive today, grew up with close friends who were gay believers, watched as they built relationships & families…

@joecarter …then I don't think he would condemn those relationships & families as against God's will, no.

Some of you will know the name Matthew Vines well, but I’d only seen it in passing. It turns out this very weekend he hosted a conference in Atlanta for The Reformation Project, designed for Christians who want “to be better equipped to advocate on behalf of lesbian, gay, bisexual, and transgender (LGBT) people in [their] faith community.”

Vines is what’s called a “progressive evangelical” and “a gay Christian LGBT activist” (Wikipedia’s description) who’s written a very popular book titled God and the Gay Christian. It began in a  YouTube talk that went viral. The book has been praised to the skies. “Profoundly important. … Could help shatter misconceptions about the Bible’s characterization of same-sex relationships as a sin against God” (U.S. News and World Report). “A game changer” (Rachel Held Evans). “This book makes significant contributions … to the ongoing scholarly conversations” (Reformed theologian James Brownson). Tony Compolo praises it.

The praise seems to be a little excessive. Southern Baptist leader Albert Mohler carefully refuted what he called “a very winsome case for overthrowing the church’s moral teachings on same-sex relationships.” He also edited an e-book titled God and the Gay Christian?, which includes an article by Stream contributor Owen Strachan. Biblical scholar Christopher Yuan offered a review in Christianity Today. Yuan “came out” as a college student but in engaging the arguments for homosexuality found that he couldn’t square them with the Bible and does not think Vines does any better. Presbyterian writer Tim Keller has just written his own review, to which Vines responded.

Other people have engaged Vines in other forums. The Presbyterian biblical scholar Robert Gagnon, who’s written The Bible and Homosexual Practice, one of the most comprehensive studies of the subject, had a long and detailed exchange with Vines, recorded here. Joshua Gonnerman, who identifies himself as a “gay Christian,” offers a short and Catholic response to Vines’ original Youtube video.

I would commend those analyses, especially Mohler’s. What interests me here is Vines’ tweeted claim that St. Paul would approve of homosexual couples and families if only he knew some. Using Jesus’ observation that we will know them by their fruits (MT 7:16) — the first chapter of his book is titled “A Tree and its Fruit” —  Vines  argues elsewhere that Christians should approve same-sex relationships because they bear good fruit. Apparently Paul didn’t see that kind of relationship in his world, but if he had seen it, he would have revised the opening of his letter to the Christians in Rome. (The Anglican biblical scholar N. T. Wright addresses the question of what Paul knew in an interview with the National Catholic Reporter.)

To be fair, in responding to Joe Carter, Vines says that he doesn’t base his argument for same-sex marriage on this idea:

@joecarter Trying to place Paul in our context is tricky & unavoidably subjective, so I don't ground my argument on that idea at all, fyi.

He argues, as have many before him, that Paul condemns predatory and other corrupted relationships — relationships that are wrong because one partner exploits the other, not because the two people are of the same sex. But it seems to me that the assumption that Paul did not know and was not speaking to our day is fundamental to his reading of Paul, and indeed of the rest of Scripture. Add to that Vines’ appeal to the relationships’ fruit, as defined by us, which gives him a kind of exegetical trump card to play against the traditional reading of the text.

The natural reading of the texts, and the way Christians have consistently read them for 2,000 years, goes one way. No matter how many arguments you present for reading it another way, you can’t really make it read differently. The exegesis will always be strained. The pro-gay reader has to assume that the authorities simply didn’t know what they were saying, that we have to separate the wheat from the chaff. Paul was bang on in what he said about grace, but about some of the practical matters, like sex, he missed the point. That is Vines’ claim.

And it’s a claim that really does sweep away the idea of a revelation. Christianity depends upon the belief that God has told us crucial truths and has done so in a way we can trust. Protestantism and Catholicism are united in this. As the Catholic Church teaches in Dei Verbum, “In His gracious goodness, God has seen to it that what He had revealed for the salvation of all nations would abide perpetually in its full integrity and be handed on to all generations.” This includes moral teaching. That teaching has been preserved reliably in written form:

Those divinely revealed realities which are contained and presented in Sacred Scripture have been committed to writing under the inspiration of the Holy Spirit. … [E]verything asserted by the inspired authors or sacred writers must be held to be asserted by the Holy Spirit. … However, since God speaks in Sacred Scripture through men in human fashion, the interpreter of Sacred Scripture, in order to see clearly what God wanted to communicate to us, should carefully investigate what meaning the sacred writers really intended, and what God wanted to manifest by means of their words.

In this case, St. Paul was not writing of same-sex relationships as he saw them in the context of their time, but same-sex relationships as they are. God used the sinner Paul, even though he didn’t know everything, to say what He wanted said. Even if all he saw were the kind of predatory relationships, his words would still apply to the most loving and fruitful ones. Vines would argue against this, but it’s what Paul’s words themselves suggest.

Someone can certainly reject the belief that God is speaking clearly in the Scriptures. If he accepts that belief, as Vines does, he’s stuck with a book that will never say exactly what he wants it to say. He can’t erase its natural meaning by claiming that the writer was too limited to write for the ages. The point of revelation is that he speaks to the ages through his limitations.

But if he doesn’t, would he have changed his teaching if he had lived in another time? Here are two tweets people attending Vines’ conference in Atlanta.

I should write about Romans and how it applies to bisexual identities. The affirming messages being shared are very binary atm. #TRPinATL

The traditional Christian answer is no. I don’t know what Vines would answer, but anyone applying the claim he made in his tweets could say yes. If St. Paul just didn’t know what he was talking about, if he would have changed his mind had he known what we know, anyone can reject anything in Scripture they don’t like. Don’t be surprised when they do it.

UPDATE: Matthew Vines responded to the article on Twitter:

@DavidMillsWrtng @Streamdotorg Thanks for writing & engaging. To be clear, though, being bisexual does not mean having multiple partners…

I take his point, but it seems to me that given his understanding of human life and sexual orientation, to live authentically one has to express one’s sexual identity sexually. Isn’t being bisexual as natural as being homosexual? If so, how is it fair that bisexuals have to deny part of who they are when heterosexual and homosexual people don’t? If the historic reading of Scripture is wrong about the nature of homosexuality, it can be wrong about the nature of sexual exclusivity, so that one person can in fact can be sexually intimate with more than one person. That seems to be the understanding some of his colleagues have, at least.

Vines followed up with:

@DavidMillsWrtng @Streamdotorg …based on my argument, monogamous—marriage with someone of either sex.

@DavidMillsWrtng @Streamdotorg Being bisexual just means being attracted to both men & women, and being able to enter a fulfilling—and…

I don’t think this affects my argument. One might not advocate for practices to which the logic of one’s position points.