Paul Ehrlich's fear mongering has triggered deadly population control policies for decades. But he's been invited to speak at the Vatican. 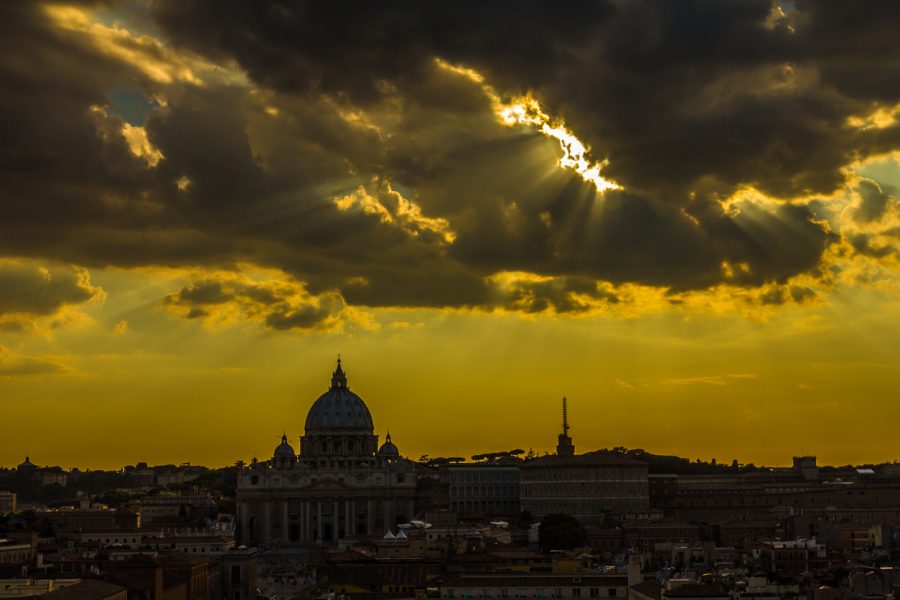 The Vatican at sunset.

Paul Ehrlich is speaking at a Vatican conference on biological extinction this week, titled “How to Save the Natural World on Which We Depend.” Many in the pro-life movement are stumped. Ehrlich isn’t just any population control fan. He is a high priest of the culture of death.

Thanks to Ehrlich’s infamous 1969 book The Population Bomb, irrational fears that overpopulation would lead to imminent wars, famines, and plagues spread like wildfire around the globe. “The battle to feed all of humanity is over,” the book famously began.

In light of this, some might say, the only way Ehrlich should be let into the Vatican is on his knees. Instead, his life’s work is receiving a moral imprimatur of sorts from the pontifical academies for the sciences, which are hosting the event without as much as an apology from Ehrlich, let alone a retraction. Quite the opposite.

In a recent New York Times report Ehrlich admits he feigned certainty beyond what the science could show throughout his career in order to scare people into embracing population control.

“If you ask me the question are there things that I have written in the past that I wouldn’t write today, the answer is certainly yes. I expressed more certainty because I was trying to bring people to get something done.”

But he also told The New York Times that he would do it again.

And, he unflinchingly confessed a despicable utilitarian logic as his inspiration.

“The idea that every woman should have as many babies as she wants is to me exactly the same kind of idea as everybody ought to be permitted to throw as much of their garbage into their neighbor’s backyard as they want.”

Vatican Leadership: Where is the Line?

Archbishop Marcelo Sánchez Sorondo, longtime chancellor and spokesperson of the pontifical academies, reportedly told Catholic News Service that Ehrlich would help “find the truth.” It is hard to see how Ehrlich has ever been interested in or able to find the truth, let alone how he might help others find it.

Ehrlich’s fear mongering about the Earth’s limited resources has repeatedly proven to be nothing more than wild speculation and shoddy science.

Even if Ehrlich’s views weren’t so reprehensible, his scientific views are flimsy. His fear mongering about the Earth’s limited resources has repeatedly proven to be nothing more than wild speculation and shoddy science. Of late, Ehrlich shrieks that population control is necessary to stop global warming even though UN data shows otherwise.

Ehrlich just keeps getting it wrong, again and again and again. That never mattered to the scientific establishment that has propped him up for 40 years, and it does not seem to matter to the leadership of the Vatican academies.

This is not to say Vatican entities should not dialogue with atheist scientists, or with people of different beliefs and views, invite them to conferences, and even co-sponsor conferences with them. But the line needs to be drawn somewhere. And a lifetime of fake science to promote abortion and population control seem a fairly obvious place to start.

The current leadership of the pontifical academies does not seem willing to draw that line.

Boongarts, Sorondo and the Dark Origins of the Population Council

In fact, Ehrlich won’t be the only population control celebrity to be revered at the conference. The pontifical academies will also honor demographer John Boongarts, the head of the Population Council. Unlike Ehrlich, Boongarts is not just a popular quack scientist.

The Population Council is the world’s foremost population control think tank, founded in the 1950s by the Rockefellers for the sole purpose of convincing poor countries to sterilize, abort, and contracept their poor populations out of existence. To this day, it is the chief source of the deceptive pseudo-science and jargon that makes the culture of death respectable among policy and media elites. (My colleague Rebecca Oas has extensively researched the sophisticated trickery of Boongarts and his establishment.)

The Population Council was founded in the 1950s for the sole purpose of convincing poor countries to sterilize, abort, and contracept their populations out of existence.

The leadership of the pontifical academies is impervious to criticism about conferring Vatican honors on groups and individuals that promote radical anti-human ideologies.

Just recently, Ehrlich described Pope Francis’ encyclical on the environment as “nonsense” because it failed to endorse population control, and he is on the record criticizing religions that do not condone contraception and abortion as “evil forces.”

But apparently none of this is a problem to Archbishop Sorondo, whose judgment has already been called into question by myself and others with pro-life concerns.

Instead of engaging critics, Sorondo denigrates them as “always the same people,” saying their views are”not logical” and just plain “crazy.”

“Truly, I just don’t understand them. Through dialogue we are able to obtain much more than they are with their policy of always criticizing others,” he boasted to Catholic News Service.

True as that might be, to pretend that Ehrlich and Bongaarts, of all people, do not espouse anti-human ideologies, or that they might be capable of objectivity and sound moral judgment is foolhardy, if not simply foolish.

Sacrificing Morality for “Synergy” and “Magic”

What is most perplexing though, is that the pontifical academies will not even distance themselves from the ideologies these speakers embrace. The Vatican might have invited Ehrlich for, say, a debate or dialogue, if it were made clear that that it did not share his views.

A clear disclaimer that the “pontifical academies do not endorse the views of Ehrlich and Bongaarts on population control and abortion” would go a long way to eliminate the moral confusion created by the conference roster. After all, this is a pontifical event of sorts and not just an event held on Vatican premises by outside organizations. But no such disclaimer will be forthcoming.

The explanation may lie in in the words of Archbishop Sorondo during a conference at the University of Notre Dame last year.

A disclaimer that casts Ehrlich and Boongarts in a bad light would spoil the magic and synergy. So, the pontifical academies will instead cast these mens’ work in the best possible light.

Too bad about the 50 million children each year who never see the light thanks to their theories. Unlike the Archbishop, they will never experience the magic of being honored by New York City high society in fancy galas presided by UN dignitaries and billionaires.

Never mind the Spirit “convincing the world of sin” (John 16:8). Sin is out. Synergy is in.