Patriarch and Archbishop Preach on Environment, Forget to Mention Jesus

In a recent New York Times op-ed, Ecumenical Patriarch Bartholomew and Archbishop of Canterbury Justin Welby have joined their voices to Pope Francis’s recent encyclical Laudato si’, calling for all people of goodwill to take our duties to care for creation seriously. 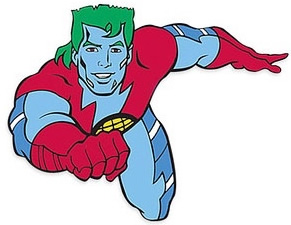 Fair enough. People, Christians especially, should care about pollution and the environment. I grew up in the 90’s. I’ve seen Captain Planet. What I find bizarre and disappointing, however, is that the message of these men isn’t much more substantive than some God talk sprinkled on top of the public service announcements that ended every episode of that campy cartoon.

For example, invoking the authority of a yet-to-be-published report in The Lancet, Bartholomew and Welby write:

In addition to highlighting the effects of climate change, we must address the root of the problem. In so doing, we will discover how the benefits of assuming moral responsibility and taking immediate action — not just on matters related to health, but also world economy and global policy — far outweigh the cost of remaining indifferent and passive.

God’s generous and plentiful creation, which we so often take for granted, is a gift to all living creatures and all living things. We must, therefore, ensure that the resources of our planet are — and continue to be — enough for all to live abundant lives.

They even admit, “Our Christian vocation is to proclaim the Gospel inclusively and comprehensively.” If only they would have done that!

Alas, there is not a single mention of Jesus Christ in the entire op-ed. The very thing that is presumably their source of unity — that they confess to be their competence — is conspicuously missing.

This year, as all eyes look ahead to the Paris climate negotiations and as governments prepare to sign a universal commitment to limit global temperature rises, we have reached a critical turning point. We are — as never before — in a position to choose charity over greed and frugality over wastefulness in order to affirm our moral commitment to our neighbor and our respect for the Earth. Basic human rights — such as access to safe water, clean air and sufficient food — should be available to everyone without distinction or discrimination.

None of these things can issue from a UN meeting. At the Paris summit some nations may say they will reduce carbon dioxide emissions. But, to judge from previous agreements, most won’t follow through. And they will likely fail to get big CO2 producers like China and India to reduce emissions for the foreseeable future, since such reductions would devastate their hundreds of millions of poor who have yet to enjoy the fruits of industrialization and trade.

Is it for such meager and quixotic political scraps that these two prominent prelates have joined forces? They are free to express their opinion about climate science, of course, but why is this their contribution?

As Charles Malik, one of the drafters of the UN’s Universal Declaration of Human Rights, an accomplished diplomat, and Orthodox Christian philosopher and theologian once wrote:

A not inconsiderable number of most harmful fallacies arise because people arrogate to themselves what does not properly fall within their competence: the clergyman talks as though he were responsible for deciding the political fate of his country; or as though the school should perform the function of the Church; or as though the fate of civilization is wholly determined by his feeling or his prayer. Distribution of competence and division of responsibility is of the essence of all civilized existence.

With all due respect, are climate science and development economics the proper competency of archbishops? Of these archbishops? Or might there be something else that they are uniquely qualified to add to the conversation?

The Patriarch and Archbishop’s op-ed could have been written by a deist like Thomas Jefferson, or a UN bureaucrat versed in God-talk. Sure, they vaguely mention God and creation. But the Gospel message of the Son of God become Son of Man, Jesus Christ, who suffered, died and rose again to save the world from corruption, sin, and death — a global cause and calling if there ever was one — is missing in action.

In the past, his All-Holiness Bartholomew has been better. But in the present, he and Archbishop Welby have given the world a message that many others are far better equipped to articulate out of their own expertise and competency.

After all, as St. Paul put it:

As the body is one and has many members, but all the members of that one body, being many, are one body, so also is Christ. For by one Spirit we were all baptized into one body — whether Jews or Greeks, whether slaves or free — and have all been made to drink into one Spirit. For in fact the body is not one member but many. (1 Corinthians 12:12-14)

Does not our world today desperately need pastors to point us to the only hope that transcends all our fears, the one who trampled down death by death, Jesus Christ? And if our pastors prefer, rather, to be political pundits and cheerleaders for the UN, who will fill the role they have abandoned? Who will provide healing, comfort and reconciliation to all people, regardless of political prejudice or station in life? Who will point the world to the one who so loved it that he gave his only Son as “a gift to all living creatures and all living things”?

Dylan Pahman is a research associate at the Acton Institute for the Study of Religion & Liberty, where he serves as assistant editor of the Journal of Markets & Morality. He is also a fellow of the Sophia Institute: International Advanced Research Forum for Eastern Christian Thought and Culture. Follow him on Twitter: @DylanPahman.