Hundreds of thousands of children are in foster care in the U.S. "This is a need that we in the Church have a responsibility to take care of," Texas pastor Chuck Evans says. 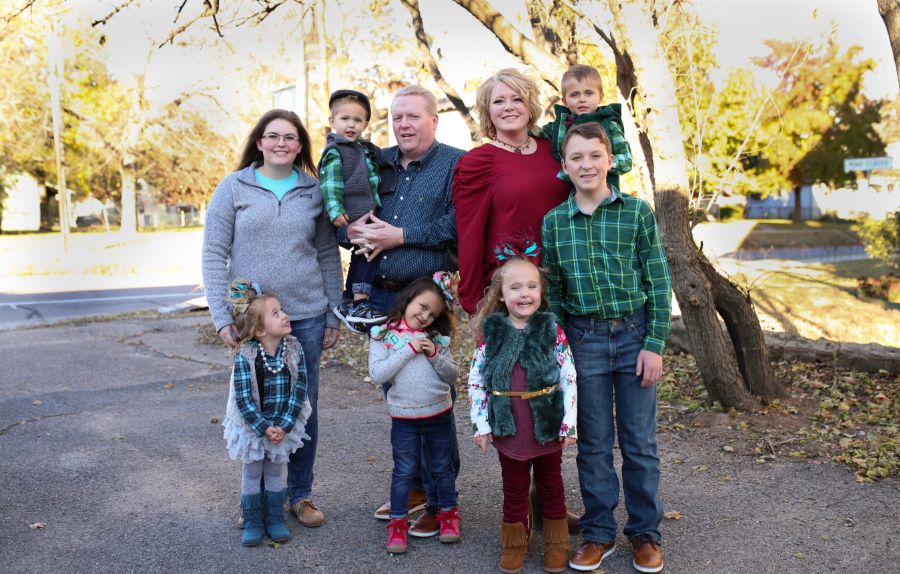 Chuck and Monica Evans have adopted five children, including a sibling group of four toddlers last June. They lead their small-town-Texas church, where Chuck pastors, in local foster care ministry. And they’re starting a nonprofit to help even more kids — their goal is 1 million.

Are they special? Not if you ask them. They’re just following the mandate in James 1:27.

“I do think it’s just the beginning for us,” Chuck told The Stream. “For me at 51, I can finally say that I truly found the thing that breaks my heart. And I’m doing everything I can to meet that need.”

‘An Epidemic On Our Hands’

“We have an epidemic on our hands,” Chuck told Cross Timbers Church (CTC) in Valley View on November 18. It was Orphan Care Sunday, and the rural sanctuary was full with about 175 people. The service, aimed at raising awareness of the foster care need, had been advertised locally for weeks.

Behind the pulpit, an overhead projector showed that in 2016, 18,000 children exited the foster care system in Texas, but 19,000 entered it. Of those who exit, many end up homeless or in prison.

“This is a need that we in the Church have a responsibility to take care of,” Chuck said.

Monica was 39 when she and Chuck married nearly 10 years ago, and knew there wouldn’t be much time to have biological kids. But after four years of trying, she learned her chances were less than 1 percent.

Religion that is pure and undefiled before God the Father is this: to visit orphans and widows in their affliction, and to keep oneself unstained from the world.

As foster parents, Monica was enthusiastic, but Chuck was half-hearted. He thought they were too old to be chosen for a placement, and feared getting attached to kids who might get taken away.

Then they heard about the sibling group they would eventually adopt — two boys and two girls — all under age 5. The twins, Blanton and Bella, now 3, were the only two together. Their older sister Gracelyn, now 5, and younger brother Deacon, now 2, were with other families.

Child Protective Services told Chuck and Monica they were the only family in the state who could keep all four siblings together.

“That blew me away,” Chuck said. So he started digging deeper — into the foster care crisis, and into Scripture. That’s when James 1:27 “became real.”

“I am sick and tired of pretty, dressed-up religion,” Chuck told his congregation on Orphan Care Sunday. “Pure religion touches affliction. Pure religion gets dirty.” In the past year, that’s what the small church has done.

About the time Gracelyn, Blanton, Bella, and Deacon came to live with the Evans family, CTC was finishing a fundraising project to battle hunger in Malawi. Chuck saw how the church, which has always been mission-oriented, “wrapped around” his family’s new additions. More aware of the foster care crisis, he turned CTC’s gaze toward a local mission field.

As he emphasized on Orphan Care Sunday, there are multiple ways to serve in it.

Ways to Meet the Need

Sometimes children are placed in foster care simply because their parents cannot provide basic needs, like beds. With help, such families can stay intact. Like thousands of churches around the U.S., CTC uses Care Portal to learn about and meet local families’ needs every week.

Another way to help foster kids is buying bags for their belongings — many show up to new homes with nothing but a garbage bag of clothes — and donating them to local CPS offices. Monica suggested donating clothes and toiletries for children of all ages who enter the system with nothing. Teen sizes are the most overlooked, she noted.

Of course, foster and adoptive parents are always needed. Chuck acknowledged the hesitation many feel about fostering: fear of getting attached, then having to let go. His response? “It’s not about you.” Love and attachment are what the children need, he said.

Fostering isn’t for everyone, however. Those who can’t foster can still undergo training to offer respite care for when foster parents need temporary relief. Others can become mentors for youth who age out of the system without ever having found a permanent family.

Giving financially to people who are doing any of the above is also an option. “That’s not a cop-out to say, ‘I give,’” Chuck said.

He recommends inviting a CPS worker to your church or business to answer questions about the best ways to meet local needs.

Chuck and Monica don’t pretend foster care and adoption are easy. Chuck has two older children from a previous marriage, and told Cooke County’s Gainesville Daily Register that he didn’t feel the same kind of “ooey gooey” love for his adopted children at first. It grew over time.

Monica told The Stream getting four toddlers at once was daunting. “Most people aren’t crazy enough to take a sibling group of four at the same time,” she recalls an adoption worker saying. But “we wouldn’t have it any other way.”

As the Evans family and CTC prove, just one family or congregation can put a big dent in their local foster care crisis. But too few are doing so. And that’s largely an awareness problem.

“Children in foster care, they really aren’t visible,” Monica said. “Just passing them in Wal-Mart, you wouldn’t know [they were foster kids]. It’s kind of out of sight, out of mind.”

1 Million Kids, One Kid At a Time

As Chuck and Monica encourage others to get involved, they’re starting their own nonprofit, Homebased Orphan Care. Their goal is to help at least 1 million children “find forever, stable homes.”

Right now they’re focusing on three north Texas counties, but plan to expand. “We definitely want to explore every option and allow God to take us as far as he wants to go,” Chuck said. He believes the key to growing is to “trust that the more faithful we are with the needs that He sends us, [the more] He’ll send us the greater needs. And when He sends us greater needs, He’ll send us greater sufficiency.”

CTC was the author’s childhood church until 2011. Chuck Evans became the pastor in 2016.

Liberty McArtor hails from the great state of Texas, where she lives with her husband and son. Learn more about her writing at LibertyMcArtor.com.