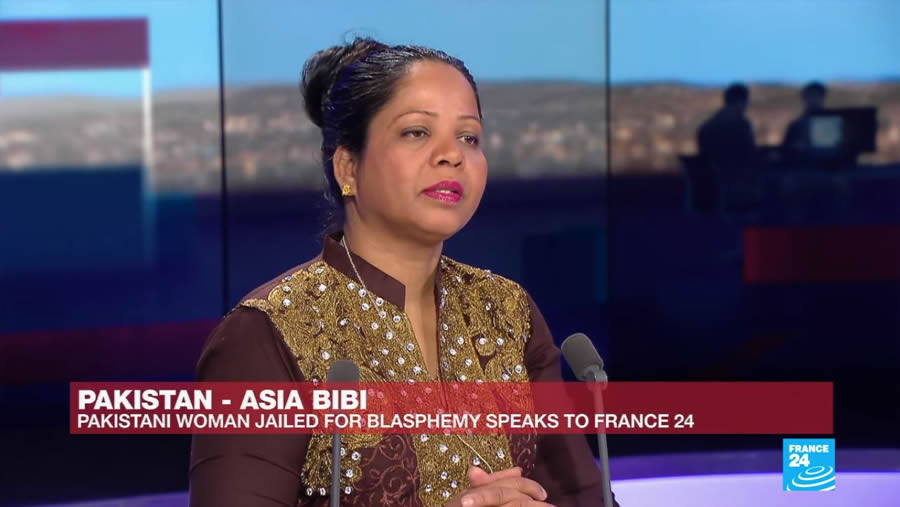 Asia Bibi, a Pakistani Christian sentenced to death by hanging in 2010 for blaspheming Muhammed, was “freed because of Jesus,” she said at a recent press conference. Bibi spent 8 years in prison. Pakistan’s Supreme Court acquitted her in 2018.

During her time in prison, Bibi knew that God was with her. “God never leaves you alone, he always accompanies you.”

After Bibi’s acquittal, she was marked for death. Yet she could not leave Pakistan until the verdict was reviewed. She lived under armed guard until finally she was allowed to leave in May 2019. Bibi and her family moved to Canada, where they have refugee status. Their refugee status will expire at the end of 2020. Bibi now seeks political asylum in France.

At the press conference, Bibi shared that the priest who baptized her as a baby told her parents that she would be tested by God. “My parents told me that and I knew that something would happen one day.” She believes that her time in prison was that test. She added that her faith grew during that time. “If you trust in God, your faith becomes stronger.” She had faith that she would be released. “I knew I was going to be released because I was accused because of the name of Jesus and I would be freed because of Jesus.”

Bibi grieved the loss of the Minister for Minorities Shabbaz Batthi. Batthi was executed for defending Bibi and opposing the blasphemy law used to convict her. Bibi stressed that Batthi was gone physically but not spiritually. “Whoever dies for the truth and for his faith, is always alive, he never dies.”

The mayor of Paris, Anne Hidalgo, named Bibi an honorary citizen of the city February 24.