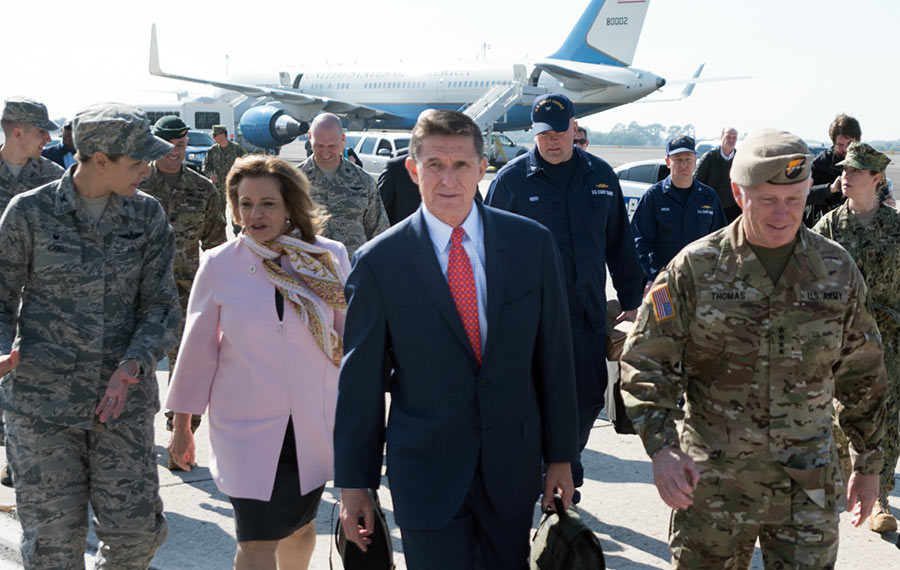 “What’s our goal? Truth/Admission, or to get him to lie, so we can prosecute him or get him fired?” Brutus going after Julius Caesar? Nope. Iago trying to bring down Othello? Try again. Eliot Ness gunning for Al Capone? Wrong. That’s Jim Comey’s FBI setting up former Lieutenant General Michael Flynn.

Almost all the examination of this sting operation has focused on how it went down. And whether it was not just immoral, but illegal, entrapment. See, most notably, former federal prosecutor Andy McCarthy, both on Tucker Carlson’s show (4.30.20) and in print. McCarthy also dealt with this issue in his book. Sean Davis and Rowan Scarborough have also each done yeoman’s work on the Flynn case.

Why Flynn Was Targeted — Not Just How

What’s getting lost in the thicket of tactical analysis is the strategic question. Why did President Obama and his administration loathe Flynn so much?

McCarthy thinks that the FBI wanted Flynn out because, as a “seasoned intelligence officer” (Flynn had headed the Defense Intelligence Agency), he would be able to hinder their investigation of President Trump for the mythical “Russia collusion.” Other theories as to why Obama’s apparatchiks slipped a knife between General Flynn’s ribs abound. They include to protect the Iran deal, alleged mismanagement and “temperament issues,” and his consulting for the Turkish government.

All those were probably contributing factors. But I think there is a much deeper, indeed ideological, reason that Obama chose to sic his minions on a three-star General, war veteran and Army Ranger. Flynn spoke inconvenient, indeed intolerable, truths about Islam.

Cliff Kincaid came closest to spelling this out in 2017. He wrote that Flynn had “evidence of a U.S. role under Barack Obama and his CIA director John Brennan in facilitating an increase of radical Islam [sic] in the Middle East.”

But it’s far more than that. Flynn’s views ran counter to the prevailing, and intolerant, consensus among policy-makers. Most American politicians, and the Establishment/“Deep State” behind them, believe the same things about Islam. It’s peaceful. Terrorists claiming its mantle are “extremists” or “radicals.” And no clash of civilizations exists.

General Flynn was not on board with that program, to put it mildly. Watch his public lecture at Ahavath Torah Congregation (August 2016). Read, as well, as his lengthy interview by the argumentative Mehdi Hasan of Al Jazeera (January 2016). (I am waiting to read Flynn’s 2016 book The Field of Fight: How We Can Win the Global War against Radical Islam and its Allies. I’ve ordered it, but as of this writing I do not have it.)

Evidence From One of His Public Lectures

In his synagogue talk (which angered some members, as I found out later from the rabbi), Flynn spelled out many of the themes from his book. There is “a disease within the Islamic world that has metastasized.” By this he meant, mainly, ISIS. He reminded those there that Iran is a state sponsor of terrorism. (As it still is.) But the former general went further. “There is no common sense in our government right now.” “There is a war declared against us, and our government does not allow us to talk about this enemy.” If you attempt to identify the enemy as Islamic, “you’re going to be called racist, you’re going to be called Islamophobic.” This is a problem, because “If you do not know the enemy, you cannot defeat the enemy. That’s Tactics 101.”

Flynn also roped in the domestic situation. Referring to an attempted beheading in Roanoke just a few days earlier, he pointed out that “these are not people yelling ‘Jesus Christ.’ They are yelling ‘Allahu Akbar.’” Flynn also said that “Islam is a political ideology.” Although whether he meant by that it was not a religion was unclear.

Evidence From His Al Jazeera Interview

His interview with Al Jazeera is even more revealing — or damning, depending on your point of view. If you don’t mind suffering through the rebarbative interjections by Islamic apologist Mehdi Hasan, that is. Right up front Flynn admits “I’ve been at war with Islam, or a component of Islam, for the last decade.” This of course infuriated Hassan. So Flynn backed off a bit. “They [ISIS] have grabbed hold of this religion and they are using it in a very, very dangerous way.”

Then, “we are at war with a radical component of Islam and the way I believe it is that Islam is a political ideology based on a religion.” Again challenged by Hasan, Flynn backtracked to “Islamism. Probably better.” But he still maintained that terrorists “are serious, the serious leaders of these groups absolutely believe their version of Islam is the right, the correct version.”

Clearly, such views could not be tolerated in the Obama Administration. And the 44th POTUS did not want the 45th being advised along such lines.

He also criticized Obama for depending on drones to kill people, rather than combating the ideology of ISIS and al-Qaeda. Drone strikes “are a tactic” while the U.S. needs “big, strategic vision.” Flynn finally settled on, “this is a political ideology based on a religion and … we have to come to grips with that.” And he condemned the (then) current administration for “a lack of understanding of, not just Iran, but the entire region.”

Clearly, such views could not be tolerated in the Obama Administration. And the 44th POTUS did not want the 45th being advised along such lines. (Case in point: Trump’s next National Security Advisor was the Islam apologist General H.R. McMaster.)

Obama was not a Muslim. But his policies and public pronouncements were so pro-Islam that that he may as well have been. Furthermore, it appears to be at least possible that his CIA director, John Brennan, may actually have converted to Islam. But even if he didn’t, his positions on Islam were, like his boss’s, also absurdly apologetic. Don’t call self-proclaimed jihadists by that name, for example — they are “murderers” who have nothing to do with Islam.

The Same Thing Happened to Me, on a Non-Legal Scale

I have my own first-hand experience with black-balling by the previous administration. I used to lecture regularly at both the Joint Special Operations University and the DHS’s Federal Law Enforcement Training Center. Both places axed me after Obama’s subordinate banned lecturers who discussed the role of jihad in Islamic theology and history. And I was a worker drone compared to General Flynn, who as NSA could have advised President Trump along realistic lines concerning the undeniable clash that we are having with Islamic civilization. As it was, Trump lurched from the clueless (about Islam) McMaster to two lawyers with no real grasp of the major struggle of our time: John Bolton and, now, Robert O’Brien.

I hope it’s true that the President is considering bringing General Flynn back into his administration. Hopefully as NSA. Not only would that right the wrongs done to a good man. It would give the President an excellent advisor on Middle Eastern affairs for, God willing, his second term.