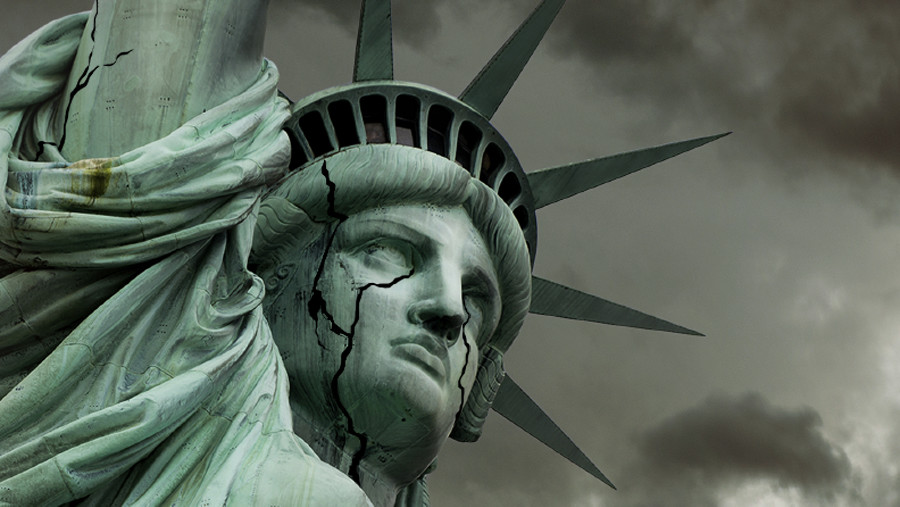 The most urgent issue facing our nation is immigration. And this should be no surprise. Demography makes nations. It also unmakes them. One of the key reasons that British, not French settlers conquered North America was simple: French women didn’t want to come to North America, while English women would. So apart from one or two cities, New France was scattered with bachelors, collecting beaver pelts and trading with the Indians. New England, Virginia and other colonial settlements instead filled up with families. Land-hungry, devout, independent-minded settlers suspicious of centralized state authority.

And the numbers of Englishmen grew, relative to the Indians, till a tipping point was reached. Whatever we think of the ethics of conquering a continent, these are the mechanics. It’s how these things happen.

And now something else is happening. The United States is changing demographically much faster than ever. It’s admitting ever more immigrants, while giving up on any effort to assimilate them. That doesn’t just mean learning English. Millions of Pakistanis speak English, but we wouldn’t call them Americans. Assimilating to what made America great, the culture of freedom, demands much more than that. And not enough conservatives are willing to look that fact in the eye. Al Perrotta and I were, in our recent The Politically Incorrect Guide to Immigration.

Those who do are the targets of smears. An intriguing conference took place in Washington, D.C. earlier this month. It attracted some of the most appealing speakers on the right (such as its organizer, Yoram Hazony, Fox News’ Tucker Carlson, author J.D. Vance and Sen. Josh Howley). And some I have grave reservations about (First Things’ Rusty Reno and anti-U.S. Founding author Patrick Deneen). I was supposed to attend the conference, but my dog-sitting plans fell through at the last minute, and I couldn’t leave my beagles.

The immigration panel included Amy Wax, who gave a courageous talk that was honest about our problems. So of course, leftists labeled her as racist. Now, I have a long track record of calling out actual white racialists. And of exposing the racist roots of groups like Planned Parenthood. I’ve called here at The Stream for the right to embrace a plan for slavery reparations, and recruit black Americans for the MAGA coalition.

I know how to spot the signs, the “tells” and code-words real racists like to use. Based on her talk (which you should go take the time to read) Ms. Wax is no racist. No more than Donald Trump is. But today’s standards are twisted by Intersectional dogma.

This new, post-Christian religion holds that racist intent, even unconscious, isn’t necessary for guilt. No, if the policies someone favors for innocent, even patriotic reasons, might have a “disparate impact”? One that accidentally helps white people? Then he’s “objectively” racist. It’s a Marxist argument. And profoundly incompatible with Christian or American standards of justice. It absolves anti-Semites from Muslim countries, and Louis Farrakhan, and other vicious haters. It tars innocent patriots like Ms. Wax. But this standard pervades universities and the Mainstream Media.

How to Pick Immigrants?

The heart of Wax’s argument was simple. We should judge new potential immigrants by how close they are to America’s founding culture. That’s the culture which gave America ordered liberty, small government, thriving free religion and economic prosperity. Or what Samuel Huntington of Harvard referred to as our “tolerant Anglo-Protestantism.”

America wasn’t founded on generic Christianity. It was founded on decentralized Protestantism. Our defining political principles come from that, from suspicion of central authority. And cussed independence of government.

Some Catholics might quibble with that, noting that most of the liberties Englishmen treasured dated back to the Middle Ages. I’d answer, candidly, that those liberties disappeared in most Catholic countries (except parts of Italy and Switzerland). But they survived in England, as Catholic convert Russell Kirk explained in America’s British Culture.

And we find such free institutions mostly today in countries settled by the British. Read Daniel Hannan’s inspiring book Inventing Freedom for much more on the happy heritage of British laws and liberties from India to New Zealand.

The controversial part of what Ms. Wax said? That people from “First World” countries will make more appropriate immigrants. They’re more likely to adapt to and accept American liberties. They’re less likely to stay sunk in ethnic ghettos. To go on public assistance. Or join the left’s coalition of splinters. (See Rep. Rashida Tlaid and her social media web of terrorist-friendly allies.) Now, Wax’s statement is objectively true, as far as it goes. It doesn’t make racist claims about “intrinsic,” inherited attributes. It’s an argument about culture, not biology.

None of that matters nowadays. Because if we followed Wax’s advice, it would have a “disparate impact” that benefited white immigrants. So it’s objectively racist, and we’re not allowed to do it or even think about it. If we do, we’ll be doused with the same plutonium as Nazi skinheads with prison tattoos.

The Ten Commandments forbids this kind of false witness against our neighbor. But none of those commandments are terribly popular nowadays, are they?

Should We Make America Mexico Again?

Answering Wax, Matthew Schmitz at The Catholic Herald makes a superficially appealing argument. He says that Christianity formed the culture of our founders. So we should embrace and welcome Christian immigrants, not First Worlders from lands with dying churches. As Schmitz writes:

Catholic migrants from Central America now have more in common with our Puritan forebears than do most Europeans. Their Church still proclaims the bodily resurrection of Christ, still believes in original sin and predestination, still opposes the evil of contraception. These are things the Puritans professed but many Protestant bodies, and many residents of formerly Protestant states – including Wax’s favored “First World” countries – no longer believe. Central Americans should be favoured over Europeans under any immigration policy based on cultural distance.

Schmitz is a strange one to step forward as a conservative policy maker on immigration. Just a few years back, he defended the Tradinista Manifesto. That Marxist call to arms favored global open borders, an intolerant Catholic state and the destruction of “the capitalist class.” Unless he has renounced those views (which I haven’t seen) Schmitz seems the wrong man to tell us how to further American liberty.

Ah, the Ordered Liberty of Venezuela and El Salvador…

And he’s wrong on the facts. America wasn’t founded on generic Christianity. It was founded on decentralized Protestantism. Our defining political principles come from that, from suspicion of central authority. And cussed independence of government. Those principles flowed from doctrinal sources, to be sure. Mainly from a Christian love for liberty, and suspicion of fallen man. They’re not direct implications of the strictly dogmatic questions Schmitz mentions. And behold, the nations from which so many immigrants are desperate to escape? They were dominated completely by the Catholic Church for 500 years. It upheld all those dogmas, doggedly. What it didn’t produce in a single Latin American country? The kind of ordered liberty and prosperity we value as Americans.

Nor do the migrants who come here from such nations quickly embrace America’s distinct, historic values. As Al Perrotta and I noted in our book, Pew Research tells quite a different story.

“[N]ew arrivals overwhelmingly tend to vote liberal and pro-choice. … Don’t believe us? Ask the Pew Research Center, which found in 2012“:

“Some 75% of Hispanics hold this view; just 19% say they prefer a smaller government. By contrast, just 41% of the public at large voice support for a bigger government.

“Support for a larger government is highest among immigrant Latinos, with 81% holding this view.”

Nor have Latino Catholics with leftist economic views pushed the Democratic party to be more pro-life. In the past 20 years, as immigrants made an ever larger part of the Democratic base, that party has become more dogmatically pro-choice, not less. Where are up-and-coming Latino “Catholic” politicians? If they’re California Attorney General Xavier Becerra, they’re trying to put pro-life journalists like David Daleiden in prison.

In other words, if we accept more Latino immigrants, we will flip more states from red to blue. Abortion will be legal in America forever. Democratic presidents elected with those extra Latino votes will stack the Supreme Court with leftists who attack religious liberty. And gun rights. And property rights. Then the U.S. will become a lot more like Mexico or Venezeula.

I don’t want that. Conservatives (Catholic or Protestant) shouldn’t want that. So we shouldn’t put up with it. We should make the test we impose, going forward, on future immigrants neither racial, cultural nor religious. It should be nakedly political. Given how migrants of a given nationality tend to vote in the U.S. today, how do future migrants from that nation seem likely to vote? Will they vote for bigger government? For more abortion and fewer religious liberties? Then we don’t want them here. Period. We can say this plainly: Don’t import more Democrats.

That might have an ethnic “disparate impact,” of course. But if we’re blunt about our motives being political, more people will see that we are sincere. If we talk high-mindedly about our “heritage” and “culture,” onlookers will be suspicious. They’ll think we have some hidden agenda. They’ll suspect it might be racial. So let’s be brutally honest.

We want to win elections. We want to keep our guns. And our churches. And more of our paychecks. If someone wants to come in and take those away? Then, whether he’s an eco-socialist Swede or a Venezuelan Chavista, we say, “No way, Jose.”