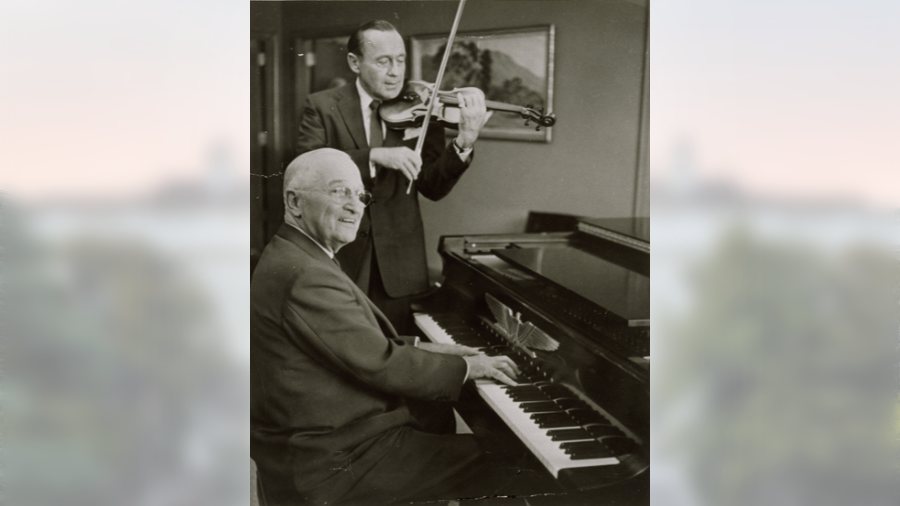 Happy President’s Day Weekend! Did you know that you could put together a pretty kickin’ band from our ex-presidents? We’ve got pianists, violinists, a horn section, a few multi-instrumentalists, and even a front man.

Let’s take a look at the White House Boogie Band.

Harry S Truman loved the instrument. And gave us one of the best music-related quotes in presidential history: “My choice early in life was either to be a piano-player in a whore house, or a politician. And to tell the truth, there’s hardly any difference.”

Richard Nixon was an even more accomplished musician. Nixon even went to a musical conservatory for a time. Here’s Nixon on The Tonight Show with Jack Paar performing his own “Piano Concerto #1” … with a 15 “Democratic violinists.”

Our String and Wind Section

“Do not neglect your music,” Thomas Jefferson told his daughter, “It will be a companion which will sweeten many hours of life for you.”

Jefferson was a great lover of music, calling it “the favorite passion of my soul.” His instrument of choice, the violin. And he was quite accomplished, though he would have dismissed a biographer’s claim that he was one of the best in the colonies. Although an “amateur violinist,” Jefferson did earn extra cash playing parties while at William & Mary.

Music even played a role in sealing the deal with wife Martha. Story goes two rivals for Martha’s hand showed up at her father’s. They were ushered into a room, only to hear Jefferson playing and singing along with Martha on her harpsicord. The two rivals heard the harmony, turned around and left.

In the musical 1776, Martha is asked by John Adams and Ben Franklin what drew her to Jefferson. “He Plays the Violin,” is her musical response.

John Tyler was no second fiddle. Our 10th president’s first love was music. In fact, he wanted a career as a classical violinist. However, his father pushed him into law, which led him into politics. Still, Tyler never lost his fondness for the violin and fiddle. He and his wife Julia were known to duet at gatherings, with Julia on guitar. In retirement, Tyler dedicated most of his time to the violin and fiddle.

How well known was his love of the instrument? The statue of Tyler in Rapid City, South Dakota shows the former president, not with the Constitution, or a law book, but lovingly clutching a violin. 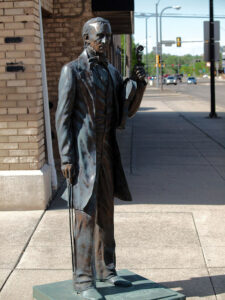 Speaking of fiddle, we’ve got us a couple banjo players for those bluegrass numbers: Chester Arthur and Andrew Jackson. In fact, Old Hickory and his wife were known to throw what we’d call hootenannies at their Tennessee home.

Our Horn and Wind Section

Start with Warren G. Harding, a lousy, corrupt president, but probably the most accomplished musician we’ve ever had. Harding was a multi-instrument virtuoso, boasting he “played every instrument but the slide trombone and the E-flat cornet.” At the 1920 Democratic Convention Harding celebrated his nomination by playing tuba! (He can play almost anything, and he choses the tuba? Should have been a sign.)

Harding’s successor, Calvin Coolidge was a cool customer. He was known to pick up a harmonica from time to time. Ronald Reagan, particularly after he retired, would blow on the ol’ harp as well.

On flute, John Quincy Adams. He was not only an accomplished flutist, but was a composer as well.

But if you’re looking for a mean saxophone player, look no further than Bill Clinton. Clinton, of course, most famously showed off his chops on The Arsenio Hall Show early in his run for president.

We need an opening act. Although he has no known musical skills, Donald Trump is our top stand-up. If we want a comedian to open the show, Trump is the man.

As for Joe Biden? Wait a week and he’ll tell you he jammed with the Beatles in Hamburg. But if we need a story-spinning MC — and Ronald Reagan is busy — the younger Joe will do.

Trump is also famous for his dance moves, in case we’re in the mood for back up dancers.

Oddly enough, even though Trump was fixture at the famous Studio 54 disco back in the ‘70s. Club co-founder Ian Schrager claimed “I never saw Donald Trump dance.” He’d hobnob with Mick Jagger and Diana Ross and the rest, but hit the dance floor? Nah. Said Schrager, “He was a serious guy.”

No president had a more serious public persona than George Washington. Yet, good luck finding a president who was a better dancer. Washington loved to dance, and his gracefulness was the stuff of legend even when still alive. The city of Alexandria, Virginia began holding the George Washington Birthnight Ball in 1780. Washington was able to attend the last two years of his life.

George Washington himself talked about his fondness for dancing in a 2018 interview with WUSA. So no doubt he’d be up for shaking his revolutionary groove thing in the White House Boogie Band, with the presidents who followed in his funky footsteps.

Obviously, we need a singer.

Thomas Jefferson had what was described as a “sweet and clear” voice, and his granddaughter recalled hearing him beautifully sing hymns as he strolled his gardens. But the Founding Father “never sang except in the retirement of his own rooms.” And that won’t do for the White House Boogie Band. Sure, he can toss in harmonies with his “singularly correct” ear, but be out front?

No, we need a president who’s not afraid to belt it out in public. Enter stage left, Barack Obama.

President Obama has a voice, no doubt. Watch him let loose with an impersonation of soul great Al Green while at the historic Apollo Theater in 2012. Whatever else you might think about Barack Obama, you can’t take away his greatest accomplishment: “He sang at the Apollo.”

Obama also sang “Amazing Grace” while delivering his powerful eulogy at the memorial service of Rev. Clementa Pickney, who was killed in the 2015 Charleston church shooting. Not a good key for him, but a good moment.

But let’s take it home with Obama joining an all-star lineup at the White House’s “Red, White & Blues” event, on “Sweet Home Chicago.”

Hope your President’s Day is as swingin’!