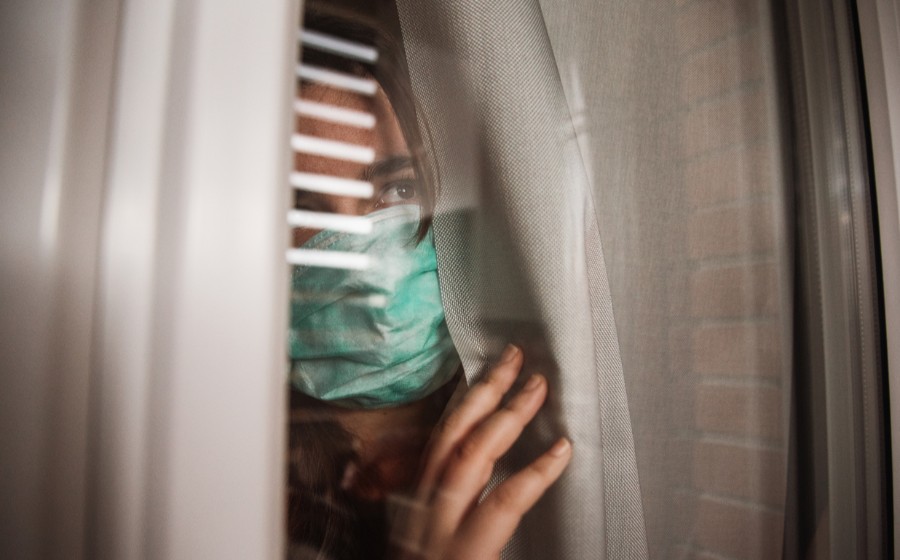 Countries around the world are running the largest real-time social experiment in history. The goal? To stop a historic pandemic in its tracks. Some of the measures to slow the coronavirus are just inconvenient. But others force heroic effort upon millions of people, at huge cost to lives and well-being. Do these efforts match the danger? And, more importantly, do they even work?

The best answer at the moment is: Probably not. We’re not saving millions of lives — because millions of lives weren’t at risk. And our very costly efforts seem to be doing much less good than we had hoped. It would therefore make sense for us to return to normal as soon as we can.

A Test No One Would Want to Conduct

Would many millions have died if the world had not shut itself down? The most scientific way to prove that lockdowns and social distancing work would have been to test them in some places but not in others. Assume there were hundreds of coronavirus cases in all these populations at the start. If the virus ranks among the deadliest pathogens, unprotected groups would suffer huge losses. The outcome in protected peoples would then be a clear sign that the measures worked.

For example, the bubonic plague wiped out nearly half of Europe within the space of four years (1347 to 1351). If a few European countries had done nothing, while others worked to stop the spread, the stark contrast of outcomes would have proven the value of the measures beyond any doubt.

Though no one would run such a test on purpose, the fact that the coronavirus hasn’t caused a huge increase in deaths in any country is telling.

You Can’t Stop a Plague That Doesn’t Exist

Italy, for example, has fared worse than most. Coronavirus infections peaked there two weeks ago. As cases continue to decline, over 20,000 lives have been lost with another 10,000 to come. Each of these deaths is a deep loss to families and friends. The question is whether they’re the sign of a deadly pandemic — that is, a disease that kills a large segment of the general population.

The answer is clearly no. Such a pandemic would kill young and old, healthy and unhealthy in large numbers. Almost all the coronavirus victims in Italy, in contrast, have been old and unhealthy. One report found the mean age at death to be 79.5 years. And nearly all victims have had preexisting health problems, often in combination. Nearly half had three or more underlying diseases.

Bottom line: Our efforts can’t be stopping a plague-like pandemic that kills indiscriminately because there isn’t such a pandemic to be stopped.

Why does that matter? Italy tends to lose about 600,000 people per year, over 40,000 of these to non-cancer respiratory disease. As with coronavirus, most of these are elderly, many with several health problems. The similar profiles suggest that some deaths attributed to coronavirus are being borrowed from other common causes of death. But it will be some time before we can figure out the extent of this overcounting. What’s clear is that 30,000 deaths of mostly elderly people in poor health is not the mark of a historic plague.

Bottom line: Our efforts can’t be stopping a plague-like pandemic that kills indiscriminately because there isn’t such a pandemic to be stopped.

How Can We Tell if our Efforts are Working?

As we all know now, the number of people infected during an epidemic rises and then falls — often at specific times of the year. This happens with or without a heroic response. So, we can’t assume that our efforts caused the drop we’re now seeing around the world.

We need a way to separate the result of our efforts from the normal background trend of rise and fall. For instance, if we see a rate of infection continue even after our actions should have triggered a drop off in cases, that’s a sign that the measures haven’t done much.

New York shows exactly this. Governor Cuomo’s 10-point plan went into effect at 8 pm on March 22. That means businesses had to close for the first time on Monday, March 23. Cuomo’s plan ordered all non-essential businesses to close. It also cancelled all non-essential gatherings, required people to stay six feet apart, and so forth.

If these efforts slowed the spread of the virus, we should have seen a major downward bend in a plot of daily confirmed COVID-19 cases. Since it takes 3 to 10 days for symptoms to appear after the time of infection, we should see this downward bend within the top grey zone in the graph below. 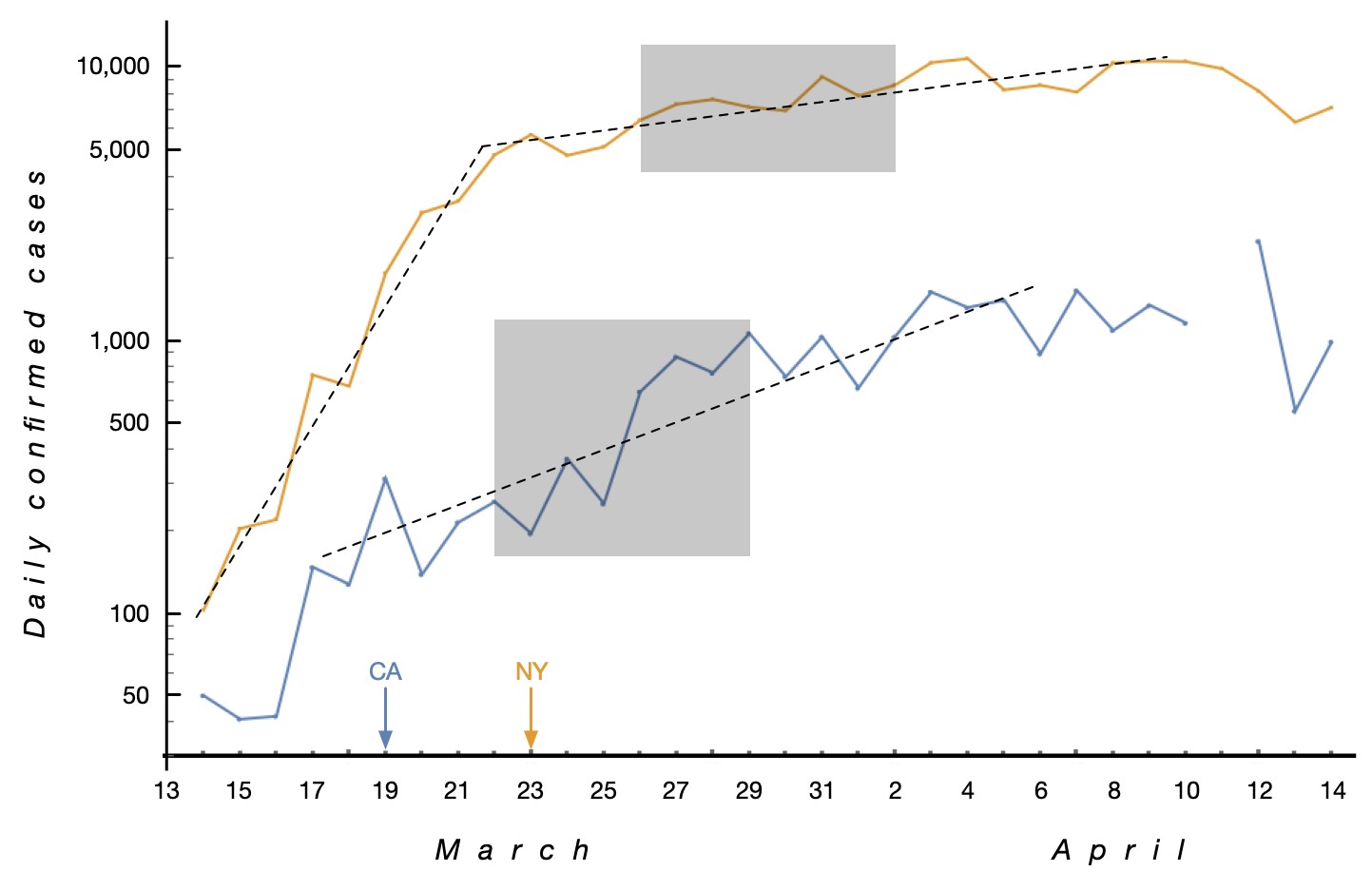 Instead, we see no change in the grey zone for New York. The downward bend we do see (roughly at March 21) can’t be a result of the 10-point plan because it occurred too early.

Similarly, we see no evidence of a downward bend in the grey zone for California, where Governor Newsom issued a lockdown order on March 19. Instead, the infection trend continues upward as if nothing had changed. Notice that downward trends come eventually in both states, as they always do during epidemics. These recent trends are happening at the same time in both states, and well after measures should have had their effects.

Bottom line: The coronavirus doesn’t seem to have noticed mandated measures in either of the two largest states.

Bottom line: The coronavirus doesn’t seem to have noticed mandated measures in either of the two largest states.

That is, in neither state did the mandated shutdowns do much if anything to curtail the spread of COVID-19. So, we should not assume similar efforts in other states are causing the decline now happening around the US.

What if we’re forcing millions of people to endure great pain, for little gain?

Douglas Axe is Maxwell Professor of Molecular Biology at Biola University, director of Biologic Institute and author of Undeniable: How Biology Confirms Our Intuition That Life Is Designed (HarperOne). Follow him on Twitter @DougAxe.