The Orphans of Antoura — Remembering the Armenian Genocide

In 1993, construction crews working at the college of St. Joseph Antoura in Lebanon made a macabre discovery. Buried in mass graves behind the school were human bones — the small bones of children.

Researcher Missak Kelechian, an electrical engineer from California, traced the find to the period when the Lazarite school had been operated as an orphanage by the Ottoman Turks in the aftermath of the 1915 Armenian Genocide. Some 1,000 Armenian children, between the ages of 3 and 15, were joined by another 200 Kurds at Antoura. Their parents had perished, driven into the Syrian desert where they were subjected to the systematic Ottoman program of plunder, starvation, kidnapping, human trafficking, rape and murder.

At Antoura, the orphans were enrolled in a ruthless program of  “Turkification” beginning with a forced conversion of the Christian children to Islam. Their Armenian names were erased from school records and replaced with Muslim names, they were taught to speak Turkish, the boys circumcised and all were indoctrinated with the glories of Turkish nationalism. Those who did not conform were subjected to the falaqa, a brutal whipping of the soles of their feet with a stiff rod. According to Kelechian, around 350 children died at the orphanage — succumbing to starvation, cholera and the violence.

Antoura was not the only center of Turkification for children. One estimate puts the total number of Armenian orphans at 150,000. The Armenian Patriarchate estimated that some 60,000 Armenian children were still being held in Turkish orphanages or Muslim homes in the early 1920s.

The Armenian Day of Remembrance: April 24

The orphans of Antoura will be remembered this month as observances for the centenary of the Armenian Genocide are held all over the world, including events organized by the large Armenian community in Southern California. More than a million perished, including large numbers of Assyrians, Kurds and Anatolian Greeks. According to a German military attaché, the Ottoman minister of war Ismail Enver said in October 1915 that he wanted to “solve the Greek problem during the war … in the same way he believe[d] he solved the Armenian problem.”

In advance of the Armenian Day of Remembrance on April 24, the Armenian Patriarch and Catholicos Karekin II said the church would offer a special liturgy canonizing its sons and daughters who died as martyrs in the genocide. “Centuries of honest accomplishments and creativity were swiftly plundered,” Karekin said. “Thousands of monasteries and churches were desecrated and destroyed. National institutions and schools were razed and ruined. Our spiritual and cultural treasures were uprooted and obliterated. Western Armenia, where for millennia — from the time of Noah – our people lived, created and built their history and culture, had been wrested from its native population.”

What to Call the Slaughter

Karekin was in Rome on April 12 for Pope Francis’ mass commemorating the martyrs of Armenia, the first Christian nation. In his comments after the mass, Francis reminded those in attendance that the destruction of the Armenians “is widely considered the first genocide of the twentieth century” which, he said, ground up Catholic and Orthodox Syrians, Assyrians, Chaldeans and Greeks 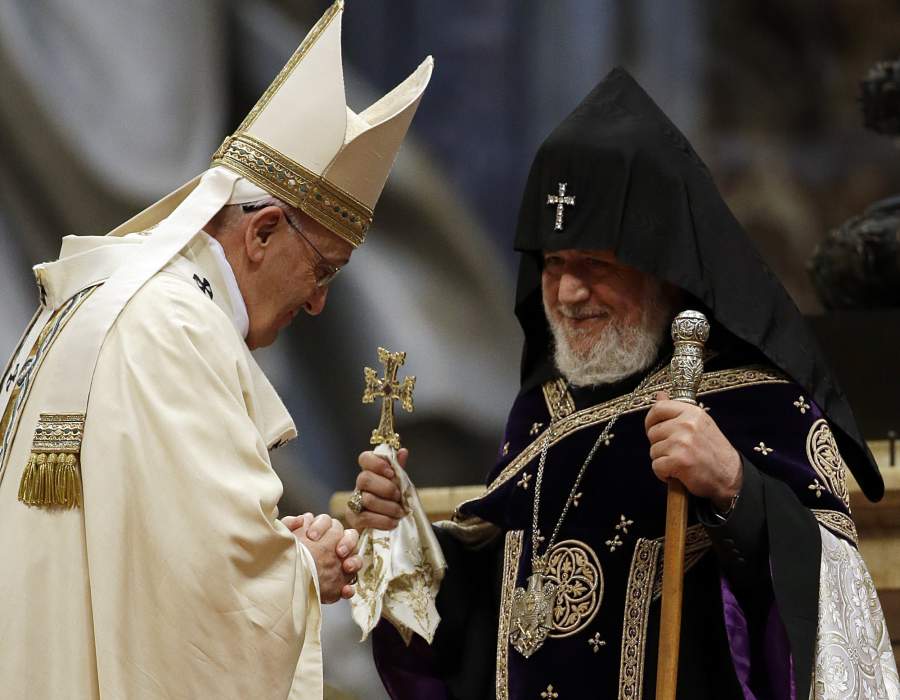 in the Ottoman killing machine. “Bishops and priests, religious, women and men, the elderly and even defenseless children and the infirm were murdered,” Francis said.

That was too much moral clarity for Turkey’s Islamist President Recep Tayyip Erdoğan, who testily warned Pope Francis not to repeat the “mistake” of describing the mass killings of Ottoman Armenians as genocide. He condemned Francis’ statements, saying that when “religious functionaries assume the duties of historians, then delirium comes out, not fact.”

But Erdoğan’s own credentials as a historian are, shall we say, suspect. Last year he claimed that Muslim sailors reached North America more than 300 years before Columbus, where they built a mosque on a Cuban shore. This elicited an outpouring of global derision in newspapers and on social media — including Turkish humor magazines. One created a new version of Leonardo da Vinci’s Mona Lisa with mosques in the background.

Erdoğan has also been pushing for a two-state solution to Cyprus, despite his failure to get the international community to recognize Turkey’s illegal 1974 invasion and occupation of the northern third of the island. During the past 30 some years, according to a Congressional report, Turkish-occupied Cyprus has suffered “extensive destruction, desecration, and pillage of religious sites and other historic monuments, as well some disputed archaeological excavations and illegal exportation of objects. … The Government of Cyprus claims that the impetus behind the acts of destruction and desecration of religious sites is the obliteration of their cultural and religious symbols … ”

Among Turkish moderates, views on the Armenians tends to be less dismissive than Erdoğan’s but not always ready to call it genocide. Turkish commentator Mustafa Akyol says the destruction of the Armenians came about after a campaign of ethnic cleansing, not genocide, was put into action. This was happening as the Ottoman Empire collapsed and Turkey, as it was drawn into the First World War, faced enemies in Russia and within its own borders from Armenian paramilitaries. “This formed the basis for the catastrophic … decision to expel all Armenians in Eastern Turkey to Syria,” Akyol wrote. “It was an inexcusable verdict – but it happened out of the fear that the Balkan nightmares would be repeated this time in Anatolia, the last stronghold of the Turks.”

Indeed, Samantha Power says in her book on genocide that when Russia entered the war it urged Armenians to rise up against Turkey and a “small minority did.” But Power, now the U.S ambassador to the United Nations, holds the view that Turkish authorities used this insurrection as a pretext for eradicating the Armenians. When Turkey entered WWI on the side of Germany against Britain, France and Russia, Turkish Interior Minister Mehmed Talaat made it clear that his country would “target its Christian subjects,” Power wrote.

The New York Times reported in January 1915 that Talaat was saying there was no room for Christians in Turkey and they should clear out. In the months to follow, Turkey disarmed Armenians serving in its army and rounded up and executed some 250 Armenian intellectuals in Constantinople, today’s Istanbul. In eastern provinces, many Armenian “notables” met the same fate.

“Armenian men in rural areas were initially enlisted as pack animals to transport Turkish suppliers to the front, but soon even this was deemed too dignified an existence for the traitorous Christians,” Power writes. “Churches were desecrated. Armenian schools were closed, and those teachers who refused to convert to Islam were killed.”

Christian Martyrs: Then and Now

All of it sounds too much like what is happening now to Christians in the Middle East and Africa, where the term “genocide” is used without hedging or apology, not just by Francis but by other Christian leaders, such as Metropolitan Hilarion of the Russian Orthodox Church.

Human rights scholar Keith David Watenpaugh, in a foreward to a new memoir by Antoura orphanage survivor Karnig Panian, said it was “important to recognize that a standard element of late-Ottoman social policy had been to convert orphans regardless of origin in the state’s care to Sunni Islam, the religion of the empire.”

But for many children, the indelible mark of Christian faith was stronger than Ottoman indoctrination and violence. When the Antoura orphanage was finally turned over to the American Red Cross as the Ottoman Empire disintegrated at the end of the war, the boys and girls managed to call back important parts of themselves. “Immediately the children asserted their rights,” Watenpaugh observes. “They refused to use their Turkish names and immediately they brought out their Armenian books, which they had hidden away in secret places during the Turkish regime.”

In his own words, Panian said the test of wills between Ottoman schoolmasters and the Armenian students was an unequal battle. “We were determined to resist — not out of rabid nationalism, for which we were too young, but simply because we wanted to hold onto our identities, which were all we had left,” he recalled.

John Couretas is executive editor of Religion & Liberty, published by the Acton Institute.

Who Can Blame Erdoğan for Going Back to the Future?