Tracking trends over a career of one-thousand published articles 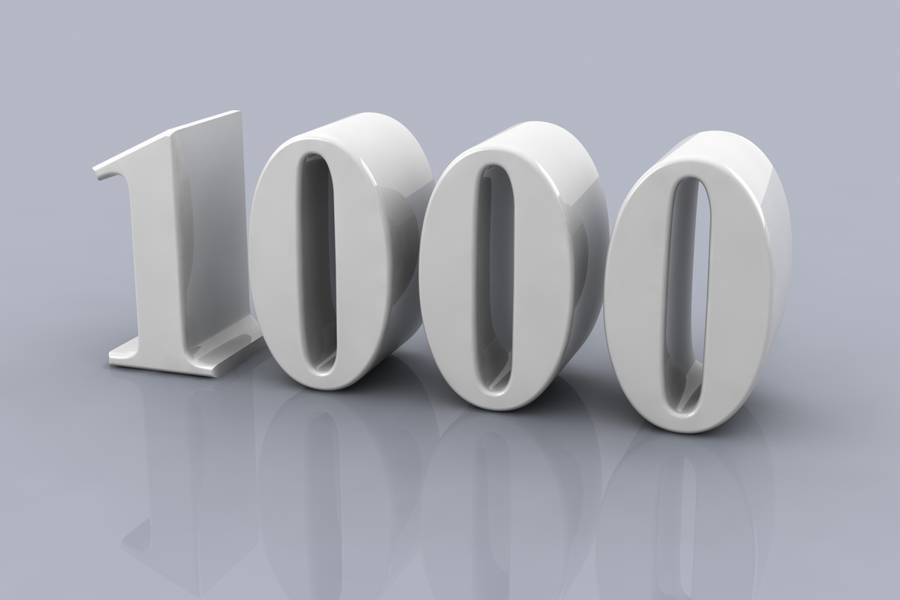 I was looking back at old articles of mine today — you’ll see why in a moment — and found this in a piece I wrote in early 2005:

College days were great for sitting around and talking about remote philosophies and possibilities. I recall one session, talking about the persecution of Christians in various places and times. Someone said, “You know, we might even live to see persecution happen in America.” No one contradicted him; anything was possible. But honestly, I couldn’t picture how that might happen.

It would be going way too far to say that persecution is upon us now. Compared to the torture and enslavement of believers in Sudan, the imprisonment of pastors in China, the martyrdom of thousands throughout history, American Christians are not yet experiencing persecution. But it’s no longer inconceivable.

That quote came from my seventh-ever published article. The one you’re reading right now is my 1000th. Other authors, including here at The Stream, have written more, but that’s okay. My wife, Sara, bought us steaks for the celebration, and I hope you don’t mind joining in from a distance.

My work as a published author began shortly after two contrary movements started taking off: New Atheism and Intelligent Design. Both had roots going back decades, but I see both as really belonging to the 21st century. They’ve moved in opposite — but encouraging — directions.

Back in 2005, Christianity’s biggest threat by far seemed to be the so-called “New Atheists.” They were stridently anti-Christian, they were almost literally gunning for us, and they were proud of it. Sam Harris’s The End of Faith (2005) kicked the movement off, calling for exactly that: the end of faith. Faith was a “bad way for knowing what’s true,” he said; it induces people to do things like fly planes into skyscrapers.

It sounds awful, except it isn’t. He was wrong on both counts: Christians have never taught that faith is how we know, but rather it’s our trust in what we know. And it wasn’t “faith” that led to 9/11, it was the terrorists’ violently wrong beliefs. Honestly, they were wrong on almost everything. When I had doubts about my faith I could pick up one of their books and be satisfied that if that was the best they had to offer, Christianity had nothing to fear.

Being wrong did nothing to curb their enthusiasm. Richard Dawkins’ The God Delusion (2011) was a New York Times best-seller for more than a year. Christopher Hitchens heated things up further with god is not Great: How Religion Poisons Everything. Daniel Dennett, the fourth member of the so-called “Four Horsemen” of the New Atheism, published an evolutionary explanation for where religion comes from (since you know it could never be on account of its being true.)

The old hymn goes, “Oh, for a thousand tongues to sing my great redeemer’s praise.” Maybe He’ll allow me a thousand more opportunities to write his praise. That’s my prayer, certainly.

Atheist leaders gathered from around the world for a huge 2012 “Reason Rally” in Washington. I was there for that dismal event. New Atheism occupied much of my first years of writing, both for publication and on my Thinking Christian blog. It was clearly on the rise.

Except it wasn’t. Funny thing: It’s pretty much gone now, victim to massive in-fighting and rude sexism — I mean real sexism, not just liberal-feminist, don’t-you-dare-open-doors-for-me “sexism.” The New Atheism’s former leaders are at each other’s throats. So now, though there is still atheism, there is no movement. Merely to look in on them now, as the excellent Shadow to Light blog does from time to time, is embarrassing. For them.

So that’s faded. Meanwhile another movement, Intelligent Design, was taking off in the early 2000s, building off momentum from earlier books by Phillip Johnson, Michael Denton, and Michael Behe. Quite the opposite of New Atheism, this one lent considerable support to faith.

Under leadership from the Discovery Institute in Seattle, ID was beginning to make waves with its case that nature is full of features that can’t be explained by mere natural causes, but instead indicate the work of a transcendent intelligent Designer.

Biological information (think DNA’s digital code), evidence of foresight in life’s progression, sudden leaps forward in life’s fossil record, and the finely tuned way the universe and the earth support life — these are all things we attribute to intelligence, never to nature’s blind vagaries. Most ID advocates have understood that to mean science strongly supports the reality of God.

Mainstream biology has not been pleased. Not one bit.

Establishment academics have tried repeatedly to shout it down, calling it “creationism in a cheap tuxedo,” a “science-stopper,” a “ploy” to “put creationism back in schools,” and more. ID suffered embarrassment of sorts in a 2005 court case in Dover, PA, where (against Discovery Institute’s policy and advice) the schools had tried in a very modest way to bring ID into science classes. The judge ruled it illegal in public schools because of ID’s “religious” nature.

There’s reason to doubt he understood what he was talking about: Much of his opinion was copied and pasted whole from the ACLU’s briefs. So I’m not sure ID suffered the worst of the embarrassment there. It was a definite setback, though. The attacks intensified. ID-sympathetic scientists learned they’d better keep mum about it, or lose their tenure, their grant funding, or their jobs. The Discovery Institute was the “Dishonesty Institute.”

Except it wasn’t. Discovery Institute Fellows kept on doing their science. Nobel Prize laureates have begun endorsing their books. The latest is Stephen C. Meyer’s Return of the God Hypothesis: Three Scientific Discoveries That Reveal the Mind Behind the Universe, a truly magisterial work in both depth and breadth, one that skeptics will have no choice but to take seriously.

It’s neither the first nor the only book that succeeds on that level; it’s just the latest. Mainstream biologists meanwhile have been holding meetings you probably haven’t heard about, asking what they can do about the growing failures of Darwinism and its scientific descendants. This is not how the academy had scripted it, but nature has a way of telling you what it wants to tell you, and it’s telling a tale now that looks a lot more intelligently designed than Darwinian.

Nevertheless anti-Christian hostility has remained on the increase. No longer fronted by the New Atheist, now it’s grabbed hold of much of our culture through critical theory. Homosexual activism, whose history goes back to at least the 1970s, began taking off in earnest around the time I started writing. I need not tell you it hasn’t slowed down any. Equally irrational is the more recent trend to socialism. Church attendance is down as more and more people declare themselves unaffiliated.

We cannot assume these latest movements will fade away on their own, as New Atheism has done. We can’t even assume God intends them to fade away; not unless we in His Church take Him more seriously than we’ve been doing.

The first two trends have moved in encouraging directions. The one encouraging thing about this one is that the church is finally waking up. I’ve been trying to rouse the Church since I started writing. Others have, too. Now the cultural situation has become too negative to ignore. Would that we’d paid attention sooner.

We cannot assume these latest movements will fade away on their own, as New Atheism has done. We can’t even assume God intends them to fade away; not unless we in His Church take Him more seriously than we’ve been doing. He may well use these movements to bring judgment on us all. God will do what it takes to turn hearts toward Him in worship, obedience, love, and truth. That includes visiting correction on hearts that are turned toward Him only in pretense, not seeking His glory above all.

This Milestone Is for Jesus Christ

I’ve been able to track a few trends over the years I’ve been writing. Thankfully there’s no tracking of trends at all with Jesus. He’s the same yesterday, today, and forever (Hebrews 13:5). He is the King Eternal, to whom be honor and glory forever and ever (1 Timothy 1:17).

A thousand articles — it’s a milestone, but it means nothing if it’s not for the glory of Jesus Christ. Looking through past titles, it looks like I’ve focused about one of every 20 articles specifically on the person of Jesus Christ. God uses all kinds of teaching, so that ratio is just fine; and yet a couple years ago I wanted to give even more focus to Jesus Christ, so I wrote Too Good to be False: How Jesus’ Incomparable Character Reveals His Reality. (The book’s Kindle version has a temporary separate home here.)

So thank you for celebrating with me.  The old hymn goes, “Oh, for a thousand tongues to sing my great redeemer’s praise.” Who knows? Maybe He’ll allow me a thousand more opportunities to write his praise.

(“Published articles” here means articles and article-length book chapters that have passed under an editor’s eye. It does not include self-published blog posts or any of my books. In case you were wondering. It’s possible my list of articles isn’t exactly accurate, but that’s okay. I’m sure I’m close enough to celebrate it regardless!)