‘One of the Best-Kept Secrets in Rome’: Finding The Fisherman’s Tomb 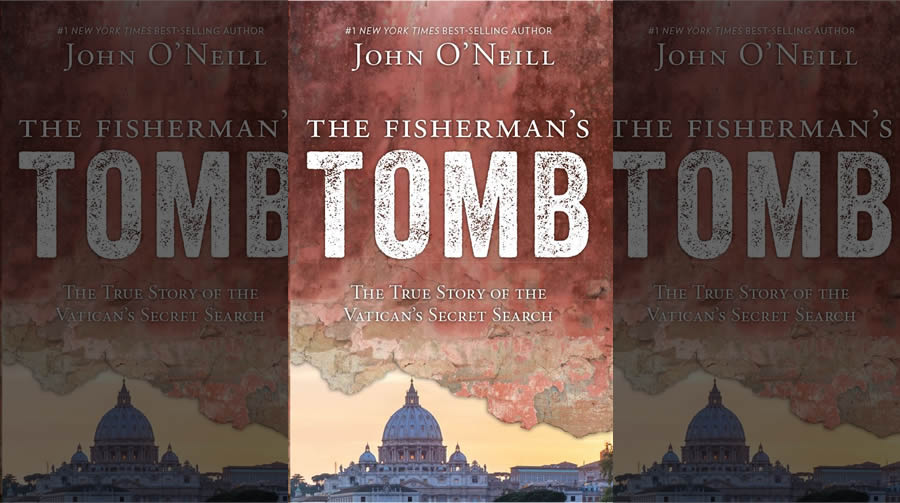 “It’s arguably one of the best-kept secrets in Rome,” writes John O’Neill in his new book The Fisherman’s Tomb: The True Story of the Vatican’s Secret Search. He was talking about the Scavi tour of the necropolis beneath the Vatican. In his book, O’Neill explores the series of coincidences that led to the discovery of St. Peter’s bones under St. Peter’s Basilica. This includes the Texas oilman who financed the project and the archaeologist who finally found St. Peter’s tomb after a 75-year search.

A trip to the Vatican with Catholic writer and friend of John Paul II, Michael Novak, led O’Neill to believe there was a story to be told. Two things convinced O’Neill to write the book. First, finding St. Peter’s bones would disprove naysayers — those who don’t believe in Christ and don’t believe Peter ever went to Rome. Second, archaeologist Margherita Guarducci’s discovery of inscriptions would speak to Christians everywhere. It’s “the greatest collection of Christian inscriptions in the world,” said O’Neill in an interview with The Stream.

Where is St. Peter?

The search for St. Peter’s bones began in 1939 when an excavation team began to dig under the Vatican for a burial place for Pope Pius XI. A workman fell through the floor and into the necropolis below. It was there that the team found evidence of a Christian woman’s grave among highly ornate Roman tombs. It was very unusual to have Christians buried next to Romans who despised them. Christian inscriptions adorned her tomb. Pope Pius XII then remembered a legend that St. Peter’s bones were buried on Vatican Hill. According to the legend, Constantine had built the first St. Peter’s basilica directly on top of St. Peter’s grave. Vatican Necropolis, dirt road that runs between the tombs under the Vatican. Courtesy of Fabbrica di San Pietro, Vatican.

Pope Pius XII was determined to find St. Peter’s tomb. But he needed a lot of financial help. He turned to Texas oilman George Strake, who essentially wrote a “blank check” to the Church for the endeavor. “[B]oth the search for Peter’s remains and Strake’s involvement in the search were kept wholly hidden from the world,” writes O’Neill. Strake wanted it that way. He believed that he could either have his reward “in this world or the next one.” He chose to keep quiet.

A priest named Antonio Ferrua maneuvered his way onto the excavation team. In 1942, the Ferrua team found what they thought were St. Peter’s bones in an unadorned tomb, but had made a “terrible mistake,” O’Neill writes. It wasn’t until Guardicci came on the scene in 1950 that the search for St. Peter’s tomb made headway. Margherita Guarducci shows a photograph of the niche in the wall where the bones believed to be the Apostle Peter’s were originally found. Religious News Service, OSV archive.

O’Neill’s book describes the archaeological significance of the Graffitti Wall and the genius of Guarducci in decrypting the transcriptions. She didn’t realize it at the time, but she’d found the clues “that would eventually solve the mystery” of St. Peter’s tomb and bring to light the consistency of Christian beliefs from early Christians to today.

Guarducci’s decryption of the code on the Graffitti Wall led her to St. Peter’s bones. It wasn’t until 2013 that Pope Francis declared, after a review of the evidence, that Guarducci had indeed found St. Peter’s bones and that Ferrua’s claims were false.

The coincidences in the story are remarkable. “You get Pius as the Pope, who really is interested in archaeology,” explained O’Neill. “You have that workman fall 20 feet [into the necropolis], plus the Pope wants to dig under there. Finally, the job is half done and who shows up but Guarducci, probably the one person on earth who would have been able to actually discern the meaning of the inscriptions and find Peter? … If you believe at all in Divine Providence, it’s too astounding a series of coincidences to explain simply by chance.”

‘The Most Important Christian Archaeological Discovery’ Pope Francis holds the relics of the Apostle Peter during a Mass in St. Peter’s Square, November 24, 2013. Newscom, REUTERS/Stefano Rellandini

The Fisherman’s Tomb was published earlier this year. Over 400 people showed up to a booksigning in Houston, to say “Thank you” to Strake, the Texas oilman who had made the discovery possible. “Many of them were people who were helped by Strake, in one fashion or another,” O’Neill said. In addition to the discovery, Strake had endowed schools and hospitals. “So, it gave them a chance to say ‘Thank you.'”

“What they found really is the greatest collection,” O’Neill explained, “the most important … Christian archaeological discovery since the Dead Sea scrolls and yet it’s virtually unknown in the United States because the secular press shut out knowledge of it.

Guarducci’s discovery is a powerful testament to the authenticity of the Bible. O’Neill noted that anyone who doubts that Christ existed, that Peter existed, or that Peter went to Rome just needs to take the Scavi tour and see his tomb. “The truth is, he did exist, the truth is that tradition and those stories really are the truth and that the inscriptions commemorate [it] in stone.”

The Vatican Sex Abuse Summit Will Achieve Nothing, As Intended