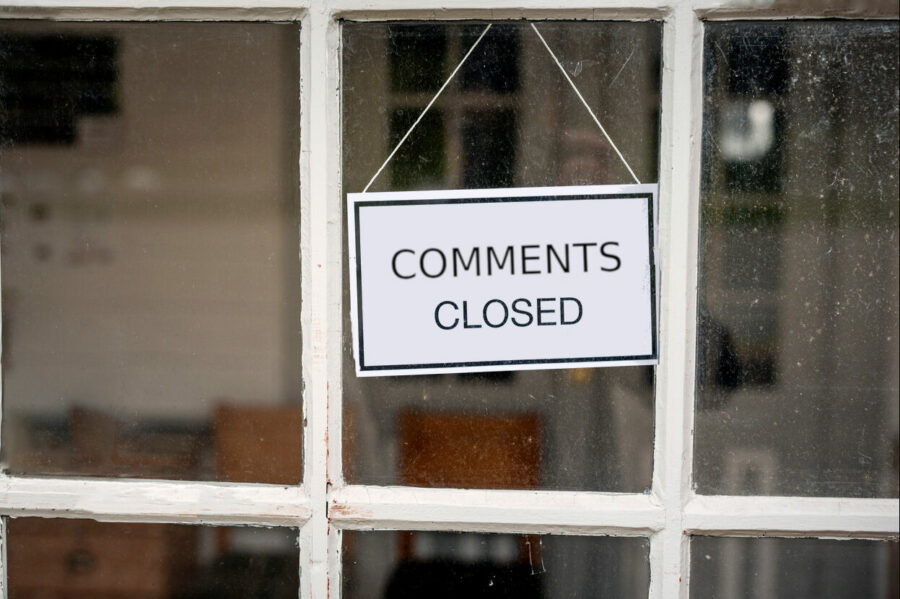 Today The Stream has shut down comments on our web pages. Our Facebook page remains wide open for discussion, and we encourage our commenters to move their conversations there.

The decision was pretty much unanimous among our team members. My own agreement with it may come as a surprise to some who have seen how much I’ve kept myself involved in discussions. In fact, I was one of the editors pushing hard for this change. Each of us had different main reasons, and I want to share mine.

I’ve been doing these discussions for a very long time. I started blogging in 2004, and for years the community of discussion there at Thinking Christian was incredibly active. One idle day I used a computer shortcut to count the words we’d written there, and it numbered in the millions. That doesn’t even include the first few years’ comments that were lost when the “Haloscan” system I was using went dark.

For several years, at least three-quarters of my most active commenters were Ph.D. physical scientists. That was both intriguing and affirming to me, as my own degrees are in music and organizational psychology. About half our commenters were committed atheists. We had great conversations. I’m still active on that site, less so, now that I’m writing here.

That’s where I learned to love that kind of interaction. That’s the reason I’ve taken part in it at The Stream. I’ve done it, but I can’t say I’ve loved it.

Bad comment behavior is one reason. Many times our better commenters have asked why we’ve allowed such-and-such a person to continue. The answer is simple: Our staff is smaller than you probably think, and we’ve never had enough resources to police the place.

That’s one reason, but there are others. At the risk of being unkind, we had better atheist representation commenting over at Thinking Christian. They thought better, they wrote better, they treated others better. Staunch? You’d better believe it. They were as firmly committed to their non-belief as the person who wrote here once, “christians are ignorant morons who’ll believe any old garbage.” (Yes, that was the entire comment, capitalization error and all.) The difference was, they had something worth saying.

We’ve been giving an open platform to unhelpful, unbecoming conversation, sometimes even unbridled lunacy for too long. I could manage nonsense like that when it showed up at Thinking Christian, where I published just three to five blog posts a week. If someone came to deliver insults rather than engage in discussion, he’d be gone. We simply cannot do that here at The Stream. Instead of three to five articles a week, we’re publishing more than twice that every day. We couldn’t begin to answer all the comments; we can’t even keep an eye on them all.

Active discussion is the essence of blogging. I have run a highly regarded blog, and it’s an honorable activity. But I know a blog when I see one, and The Stream is not a blog. It’s a daily news and commentary site, with a professional staff and professional contributors. Some of our commenters genuinely meet and match that same standard. Those same people know, just as well as we do, that the overall commenting tone here doesn’t rise to that level. The effect has been to degrade the site’s professionalism.

The real tipping point for some of our staff, though, may have been a couple weeks ago when we got comment-bombed. Someone or some group slammed us with hundreds of vile, abusive comments posted here overnight. They used acronyms to evade Disqus’s profanity filters. They left us with a huge load of cleanup work to do.

Our Facebook page remains wide open. We hope you’ll continue your discussions there. I personally encourage you to do everything you can to keep the quality high.

Don’t Trust the Safety of Your Own Echo Chamber

Christians Must Hold the Standard