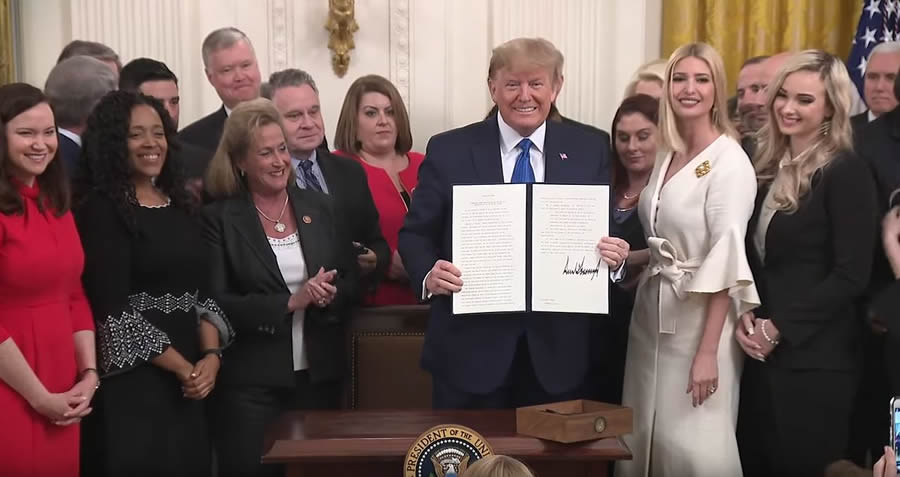 President Trump signed an executive order Friday on the 20th anniversary of the Trafficking Victims Protection Act. The order will work to combat human trafficking and online child exploitation in the United States.

In his address at the White House Summit on Human Trafficking, Trump acknowledged that human trafficking is a problem everywhere — including the United States. “An estimated 25 million people around the world today are being held captive, manipulated and abused by human traffickers. In 2018 alone, the National Human Trafficking Hotline identified over 23,000 human trafficking victims in the United States. Sixty-five percent of these victims are women. More than one in five were children. Human traffickers prey on the most vulnerable citizens and people. They’re vicious. They’re violent. My administration is fighting these monsters.”

Trump added that his administration is dismantling the criminal organizations that make large-scale human trafficking possible. The Department of Justice has prosecuted a record number of violent crimes and in the last few years and Immigration and Customs Enforcement (ICE) has arrested over 5,000 human traffickers.

The administration has enacted bills and set aside millions to fight sex trafficking, as well as held other governments responsible for “failing to address human trafficking” in their countries. The order signed today will build on that work. Trump explained:

This order expands prevention education programs, promotes housing opportunities for survivors, and prioritizes the removal of child sexual abuse material from the internet. And furthermore, it takes the vital step of designating a full-time position here at the White House dedicated solely to combating human trafficking so people know how important it is.

The Trump administration will implement the strategies within the coming months. “We will not rest until we’ve stopped every last human trafficker and liberated every last survivor.”

LIFE Today’s RescueLIFE outreach combats the human trafficking problem by reaching, rescuing and restoring. “RescueLIFE is LIFE’s way to shine the light of God’s love in the darkest places on earth, where children, teens and young women are forced into sex trafficking for the purpose of exploitation. Their rights are violated, and their toxic environments deny them the opportunity to reach their full, God-given potential.”

RescueLIFE goes into villages, reaching, educating and preventing children from becoming victims, rescuing those who have been victimized and restoring them by “providing an environment where their hearts, minds and bodies can be restored to the beauty God designed for them.” RescueLIFE believes that the evil of human trafficking will be overtaken by God’s love and light. Please consider giving today to RescueLIFE to combat human trafficking worldwide.

RescueLIFE: Saving Those Lost in the Sex Trafficking Business