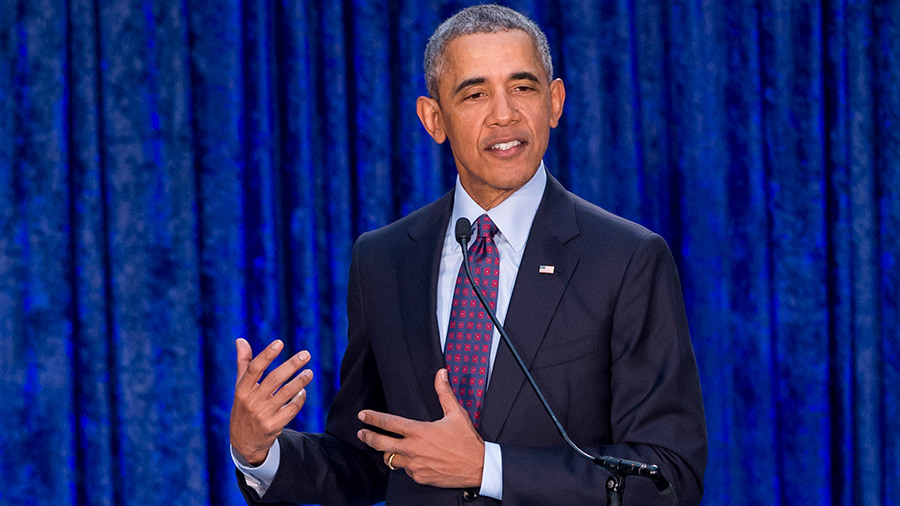 The country witnessed the unveiling of your portrait in the National Gallery yesterday. We also found out you had chosen Kehinde Wiley to paint it. Within moments word went out that Wiley had once painted a portrait of a black woman holding a white woman’s decapitated head. It is a message that contributes to dividing America. I ask you now: Is that what you really want?

That 2012 painting was titled Judith and Holofernes. In choosing that as his subject, Wiley joined with many artists through history who have rendered that grisly scene on canvas. The story comes from the Old Testament Apocryphal book of Judith. Holofernes was an Assyrian general whose troops were besieging Judith’s city, Bethulia. Judith managed to get close to him, where she beheaded him, securing victory and safety for her people.

But Wiley had changed the subject matter: No longer a Jewish woman beheading an attacking Assyrian general, in his painting, it was a black woman holding the head of a white woman.

It’s hard to miss the message. Well, maybe it’s easier for some. One museum described it this way: “Wiley translates this image of a courageous, powerful woman into a contemporary version that resonates with fury and righteousness.”

It’s hard to miss the message.

Fury, yes. But righteousness? How? Judith’s act in the original story was right because, with a minimum of bloodshed, she saved her people from immediate destruction. What makes Wiley’s version of it right?

The fury is certainly understandable. There was a time when black Africans were systematically kidnapped — by African Muslims — and sold to white traders. Taking up arms against them would certainly have been justified. I can only imagine how much better the world would be today if some African woman had beheaded that monster — figuratively or literally — hundreds of years ago.

“A Play on the ‘Kill Whitey’ Thing”

But Wiley’s message is that black-white conflict today is like the battle between Bethulia and Assyria. The black woman’s fury is only “righteous” like the original Judith’s if she’s saving her people from an attacking enemy — an enemy intent on destroying her people. Which Wiley may even have intended, for he has told New York magazine, “It’s sort of a play on the ‘kill whitey’ thing.”

Blacks are still angry. I get that. Their mistreatment has improved by orders of magnitude, for the kidnapping and the enslavement are mercifully just bad memories. But they retain power still as memories, and discrimination remains besides.

Your role as leader, Mr. Obama, allows you uniquely to recognize that anger, to validate its causes, and to speak it publicly. It also affords you a choice: You can either stoke that anger into red-hot fury, or you can help lead our nation toward healing at last. Which will you choose?

I know what you’ve given lip service to. How many times have you called for unity, not division? But you’ve also given us reason to wonder whether you really mean it. Your calls for bipartisanship went nowhere, even among the members of your own party. You did nothing to calm the painful divisions that erupted in the country after Trump’s election.

And now with the unveiling of this portrait you’ve stamped your approval on an artist whose body of work upends every unifying message you’ve ever thought to speak.

Actions speak louder than words. Art does, too. Wiley himself told New York magazine, “The games I’m playing have much more to do with using the language of power and the vocabulary of power to construct new sentences.” He went on to say, “It’s about pointing to empire and control and domination and misogyny and all those social ills in the work, but it’s not necessarily taking a position. Oftentimes it’s actually embodying it.”

Art doesn’t merely speak a message; it embodies it. Wiley’s Judith and Holofernes embodies a message of mortal enmity between races.

So Mr. Obama, what is your real intention for this country?

It’s Not Too Late: Please Stop Dividing Our Country

So Mr. Obama, what is your real intention for this country? What was it during your presidency? What is it today?

This latest revelation from you is divisive. It pits Americans against Americans. This message is damaging to the nation — the whole nation, both blacks and whites, and people of every other race and color.

It’s not too late, Mr. Obama. Your portrait is finished and it’s on display, but it’s not too late for you to change your message. No one could speak it as well as you. No one is positioned like you are to turn America toward healing and peace.

Do you want that for America, Mr. Obama? I certainly wouldn’t expect healing to be quick or easy; there’s too much to overcome there. But this I do know: Peace is better than war. Unity is better than division. Calm is better than violence.

And though it’s a long road from here to that healing, we’ll get there a lot quicker if we walk in the right direction. Would you take that leadership, Mr. Obama? Would you turn yourself around, first of all, and give up on your divisive, harmful ways? Would you do what you can to lead America toward the unity you’ve spoken of so often?