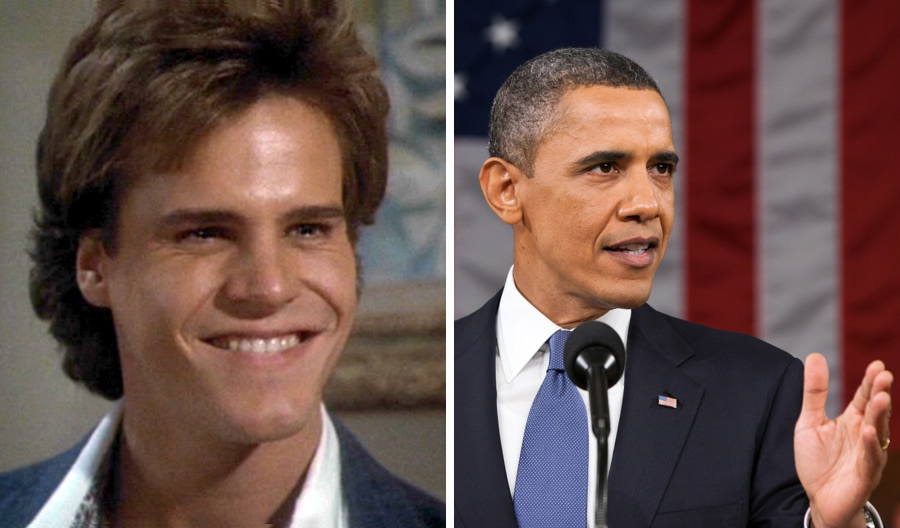 Left: Craig Sheffer, portrays the character Hardy Jenns in Some Kind of Wonderful (1987). Right: Former President Barack Obama delivers his State of the Union Speech at the U.S. Capitol on Feb. 12, 2013.

Ever see the ’80s flick Some Kind of Wonderful? Hardy Jenns has style, looks, riches, aloof arrogance … and power. Everyone wants to be him. Everyone wants to be his friend. Towards the end, our hero Keith goes to a party with Hardy’s beautiful ex-girlfriend Amanda Jones. Hardy tosses off a lewd comment about Amanda. Keith reacts. Hardy tells his minions, “Take him outside and kick the **** out of him.” (That had been the plan all along. That’s why Keith had been invited to the party in the first place.)

Grabbed by Hardy’s sidekicks, Keith asks, “Why don’t you take me outside?” Hardy does a double-take. Perplexed at the very suggestion. “I don’t play that way. I’d love to. But you see I’m the host here. I’ve got guests.”

See, Hardy doesn’t get soiled. He’s above it. He lets other people do his dirty work.

Obama Has Others Toss Biden Under the Bus

Obama’s Vice President, Joe Biden is in deep trouble. His campaign is proving a disaster. Every day it’s some huge new mistake or mental error. Last week, news broke that Joe’s staffers are so concerned about the errors they are cutting back dramatically on his campaign events.

And what followed right on the heels of that news? Obama’s version of “Take him outside and kick the **** out of him.” Specifically, his team leaked how Obama had tried to stop Biden from running.

The New York Times gobbled up the leak:

The two men spoke at least a half a dozen times before Mr. Biden decided to run, and Mr. Obama took pains to cast his doubts about the campaign in personal terms. “You don’t have to do this, Joe, you really don’t,” Mr. Obama told Mr. Biden earlier this year, according to a person familiar with the exchange.

Love him or hate him, do you think Trump would leak something like that? Heck no. He’d shout it on the front lawn of the White House. “I told Joe he didn’t have to run. I knew it’d be a disaster. Look, I love Joe. But I know he’s not the guy he was.” Obama? No. Ever protective of his own interests, never wanting to come off as the heavy, Obama wanted to tell the world “Don’t blame me for Biden’s mess!” He just didn’t have the nerve to stand up and say it himself.

Who can be surprised?

Let Biden Be Painted as a Racist

Go back to that first Democratic debate. Sen. Kamala Harris painted Joe Biden as a racist. She practically had Biden in Gov. Ralph Northam’s Klan hood hitting 7-year-old Kamala with a water cannon.

Obama wasn’t about to expend the energy, risk his legacy, by defending Biden even against such a heinous charge as racism.

We know Obama says he wants to stay neutral in the primary. Fine. However, when the man who was your loyal number two for two terms, who gave you eight years of quiet counsel, who never crossed you in public, who never tried to steal your limelight, is dubbed a racist? You say something. And you say it loud. That’s not putting a hand on the scale. That’s putting an arm around a friend.

His silence said a lot. Not about Biden. No one really thinks Biden’s a racist. But it tells you plenty about Obama. The expiration date on his friendship with Biden was 12:01 p.m., January 20, 2017. The minute Biden’s usefulness ended. And Obama wasn’t about to expend the energy, risk his legacy, by defending Biden even against such a heinous charge as racism.

How disheartening it must be for Biden to know Obama does not have his back as he totters. (Don’t feel so bad, Joe. Obama threw his own grandmother under the bus in 2008 to extricate himself from the Rev. Jeremiah Wright mess.)

The pattern of letting others do his dirty work is nothing new for Obama. Go back to his Senate race in 2004. How’d he get the Democratic nomination? Somehow the sealed divorce records of front-runner Blair Hull were pried open, revealing allegations of abuse by Hull’s ex-wife. Hull’s campaign collapsed practically overnight.

How’d Obama win the race? He was facing a tough battle against Republican Jack Ryan. Ryan was straight out of central casting. He could play Tom Clancy’s character Jack Ryan. He also happened to be the ex-husband of Star Trek: Deep Space Nine bombshell Jeri Ryan. The actress supported Ryan’s run. Yet, once again, Obama’s people and their friends in Chicago media somehow managed to get friendly judges in California to open their divorce and child custody files.

Obama? He was silent as his backers fought to pry the files open. But four days after the judge ordered the release of the divorce files, Obama suddenly called on Democrats not to use the information in the campaign. Then the dirt in the custody files came out. The salacious allegations in the files — which Ryan denied — ignited a firestorm. Ryan was dragged out in public and had the bleep kicked out of him, as Obama played the dapper, dirt-free host.

“What happened to him over the last three days was unfortunate,” Obama said after Ryan dropped out. “It’s not something I certainly would wish on anybody.” Yet it was his people who led the charge to bring it about.

Let me tell you the irony in the Ryan story. When Obama and Ryan started going head-to-head, Ryan had a staffer go around videotaping all of Obama’s campaign events. “So what?” you say. Except Obama complained. Made it out like Ryan was doing something unethical. So Ryan stopped. Yes, Obama was happy with his people digging into Ryan’s divorce, but tracking Obama’s own public utterances was out of bounds.

And forget about accessing any of Obama’s records. Nuclear secrets weren’t protected like those suckers were.

So why’s this matter? “He’s out of office,” our liberal friends will say. “You’re just trying to distract from Trump’s (fill in the blank on whatever is the day’s uproar).”

It matters for two reasons:

First, Joe Biden is a human being with human weaknesses and is clearly weakening, not just politically, but physically. Vultures, be they Republicans or Democratic rivals, are picking him apart. Obama not having his back is just cold, heartless. Calculating. If this is what he does to someone he called a brother, what was he willing to do to people he considered foes?

Second, Obama’s history shows a pattern of using his lieutenants to sabotage opponents — or in this case a friend who may tarnish his legacy — by any means necessary. Let the dirty deed be done for his benefit, then feign moral purity. (His IRS targeting TEA Party groups, anyone?)

The Obama myth needs to be broken down, especially for our liberal friends. Especially for the people buying “I Miss Barack” hats.

The Coming Slap Down

In a few short weeks, DOJ Inspector General Michael Horowitz will release his investigation into the DOJ/FBI’s illicit targeting of then-candidate Donald Trump’s campaign. John Solomon also lists 10 sets of documents that “could rock Washington this fall,” many of which go far beyond the DOJ and FBI. U.S. Attorneys John H. Durham and John Huber are both pursuing possible criminal prosecutions of figures connected to spying on the Trump campaign and the Russia hoax.

Joe Biden may be too weak at this point to point a finger. Or maybe he’s still too loyal. But will all the co-conspirators stay mum?

Obama will play his role. He already wrote part of the script. Remember Susan Rice’s bizarre email to herself minutes after Trump took office. She quotes Obama at a crucial Oval Office meeting about the Russia Collusion operation against Trump as saying, make sure everything is “by the book.”

Is Obama Really Above the Law?

The indictments and criminal referrals will drop. Obama will feign ignorance and innocence. (As he did with Hillary’s illegal email server.) He will say with his patented aloof measure, “What happened to (Comey/ Brennan/ McCabe/ Whoever) is unfortunate. It’s not something I certainly would wish on anybody.”

When asked “Why don’t you answer for the actions done in your name?” he will be answer. “I’d love to. But you see I’m Obama. And I have Netflix shows to produce.”

But like Amanda in Some Kind of Wonderful, Lady Justice may have a hard, solid surprise slap or two in store for Obama.

Joe Biden may be too weak at this point to point a finger. Or maybe he’s still too loyal. But will all the co-conspirators stay mum? Won’t there be at least one who learned from Obama the craft of furthering one’s self interest at whatever the cost?

Hardy Jenns got his. Will Barack Obama?