Why Not Give Hillary Clinton a Get-Out-of-Jail-Free Card? 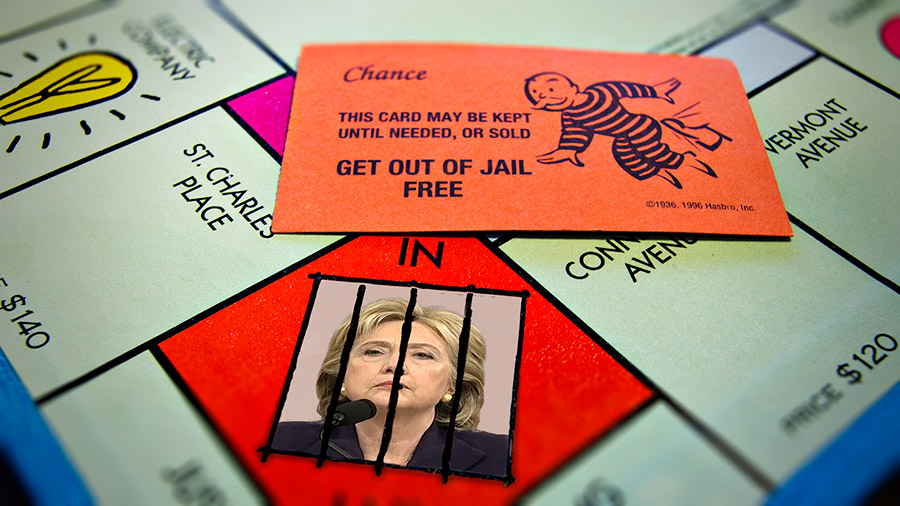 “I don’t want to hurt the Clintons, I really don’t,” said President-elect Donald Trump on November 22, reversing his frequent statements that if he were elected, Hillary Clinton would go to jail. “She went through a lot and suffered greatly in many ways.”

The statement doesn’t rule out the possibility that Hillary Clinton will face prosecution. The decision isn’t properly the President’s to make but lies with the Justice Department. Yet Presidents’ priorities sometimes determine Attorney Generals’, and in this case that’s likely.

Asked why he was backing off of his campaign rhetoric, Trump said, “It’s just not something that I feel strongly about.”

It’s good to see such sentiments. They reveal a side of Donald Trump that wasn’t always very visible on the campaign trail, though close friends and associates have said all along it was there: compassion and pity. They’re the opposite of the angry, vindictive temper Trump often displayed.

It’s as if Trump has suddenly come face-to-face with Jesus saying, “You have heard that it was said, ‘An eye for an eye and a tooth for a tooth.’ But I say to you, Do not resist the one who is evil. But if anyone slaps you on the right cheek, turn to him the other also” (Matthew 5:38–39).

So why am I, who taught Christian ethics in seminary and stressed the need for humility and forgiveness, not celebrating?

There’s a difference between grace, which is favor contrary to merit, and justice, which is rendering what is due.

Well, I am celebrating — Trump’s personal grace shown in compassion and kindness (assuming, as I’m willing to do, that those, and not only political expediency, motivated his turnaround).

But I’m not celebrating the public injustice should Clinton go unprosecuted.

Two key distinctions arise: between personal and public, and between grace and justice.

Second, there’s a difference between grace, which is favor contrary to merit, and justice, which is rendering what is due (Romans 2:6). The Apostle Paul spelled that difference out pointedly when he wrote about why God saves some and not others: “Now to the one who works, his wages are not counted as a gift [Greek charis, “grace”] but as his due” (Romans 4:4) and “if it is by grace, it is no longer on the basis of works; otherwise grace would no longer be grace” (Romans 11:6).

An important element of Christian ethics is that God ordains public officials to enforce justice, not to dispense grace.

Jesus’ words about turning the other cheek were addressed to persons acting in their private capacity and prescribed grace. Paul echoed them when he wrote,

Live in harmony with one another. … Repay no one evil for evil, but give thought to do what is honorable in the sight of all. If possible, so far as it depends on you, live peaceably with all. Beloved, never avenge yourselves, but leave it to the wrath of God, for it is written, ‘Vengeance is mine, I will repay, says the Lord.’” [Romans 12:16–19]

But Paul didn’t stop there. He turned immediately from forbidding vengeance by private persons to prescribing it for civil governments:

Would you have no fear of the one who is in authority? Then do what is good, and you will receive his approval, for he is God’s servant for your good. But if you do wrong, be afraid, for he does not bear the sword in vain. For he is the servant of God, an avenger to who carries out God’s wrath on the wrongdoer. [Romans 13:3b–4]

An important element of Christian ethics is that God ordains public officials to enforce justice, not to dispense grace.

Those two distinctions — between personal and public, and between grace and justice — come directly into play when we ask whether Hillary Clinton should be prosecuted for her alleged violations of national security law by transmitting classified information over her private server. She should be.

Kellyanne Conway, Trump’s campaign manager and now a leader of his transition team, said, “I think Hillary Clinton still has to face the fact that a majority of Americans don’t find her to be honest or trustworthy. … But if Donald Trump can help her heal then perhaps that’s a good thing.”

The grace motivating that statement is laudable, but there’s a difference between voters’ not trusting you and your being indicted, prosecuted, convicted, and punished for a crime, especially one so serious.

The general rationale for not prosecuting Clinton is that the nation needs to put the divisiveness of the campaign behind it, seek healing, and move on. That, too, is a laudable motive, but it ignores two very important facts: The first is that Clinton’s mishandling of classified information occurred years before the campaign. The second is a crucial ethical principle: the Rule of Law, which requires that all relevant laws apply to all people equally.

As former military attorney David French pointed out, had Clinton been a military officer and, even once, transmitted classified information over an unsecured email server (not to mention lying to Congress and the FBI about it, and the conflict of interest between the Clinton Foundation and her powers as Secretary of State), she would undoubtedly have faced a career-killing general officer memorandum of reprimand, almost certainly a court-martial, and probably criminal charges under the Espionage Act, conviction for which could have sent her to prison.

Do the American people need healing? Yes. But far more than healing from the division over the a choice of candidates for President, they need healing from the division between the rich and powerful, on the one hand, who so often break the law with impunity, and the middle class, poor, and weak, on the other hand, who aren’t considered “too big to fail.”

What America needs is the restored understanding that in America we have, as John Adams put it, “a government of laws and not of men,” and the confidence that those laws apply equally to all, rich and poor, powerful and weak, popular and despised. Giving Clinton a get-out-of-jail-free card further erodes that confidence.

The issue is not whether Hillary Clinton has suffered a lot. It’s whether she’s broken the law. If President-elect Trump wants the law to apply to immigrants, he should want it to apply to Clinton as well.

Calvin Beisner, Ph.D., was Associate Professor of Social Ethics at Knox Theological Seminary 2000–2008 and the author of Social Justice: How Good Intentions Undermine Justice and Compassion.

But First, the Cross