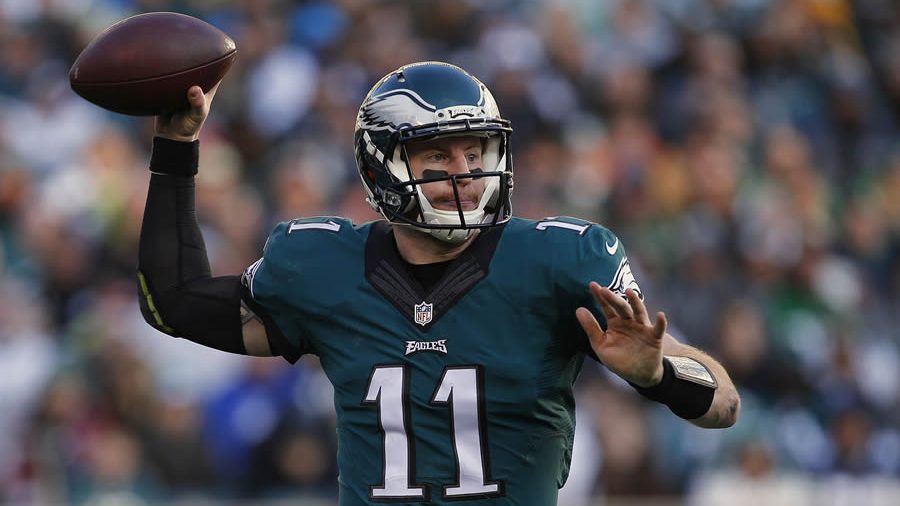 Philadelphia Eagles quarterback Carson Wentz loves Jesus and he’s not afraid who knows it. From post-game press conferences to radio shows and social media, Wentz talks about his faith and what it means to him.

He had the chance recently to sit down with AP sports writer Rob Maaddi at a live event called “Faith on the Field,” where he shared the one lie that Satan wants people to believe.

Over 2,000 people battled the rain to attend the event at Eastern University in Pennsylvania last week, reported The Christian Post.  Wentz — along with his Eagles teammates Trey Burton and Stefen Wisniewski —  shared their love for Jesus, what their faith means to them and answered fan’s questions.

The Lie the Devil Wants You to Believe

At one point, Wentz explained a common lie of the Enemy, saying, “being saved by works is obviously a lie, but it’s a lie that a lot of people believe. It’s a lie just in our culture.” He said, “I know for me as a man, even when I was a kid, with sports and anything I did, I was going to work my tail off to earn what I got. That’s how I was wired. That’s how the world kind of instills this value, so to speak, is work, work, work, and earn it.”

Wentz said he’d pray and attend church and think he was a good person — that he was doing the right thing and would be saved “naturally.” “That’s the lie that the devil wants you to believe.” One Bible verse in particular changed his perspective:

Ephesians 2:8-10: ‘For it is by Grace that you have been saved through faith — and this not of yourselves, it is the gift of God — not by works, so that no one can boast. For we are God’s handiwork, created in Christ Jesus to do good works which God prepared in advance for us to do.’ So, when I learned about this grace and learned about how my view of Christianity was really just flipped on it’s head, because you see, Christianity is the only religion in the world that you can’t earn Heaven, you can’t earn an afterlife, you can’t earn reincarnation or whatever it is that other people believe.

He added that it’s a daily process to remind himself that he can’t do it without Jesus. “So, I really challenge every one of us to just daily kind of have that perspective because it’s so easy to get caught up in doing good and thinking that I’m good enough, but without Jesus, none of us are.”

Handling the Jeers About His Faith

Maaddi asked Wentz how he handles criticism about sharing his faith. “Jesus was murdered on a cross,” he explained. “I mean it doesn’t get much worse than that. In that day and age, it doesn’t get anymore humiliating and embarrassing than that. And so, I’m like, if Jesus, who is our ultimate example, endured that, then I can endure a couple tweets, I can endure a little riff raff here and there.”

Even After a Bad Day, Give Thanks to God