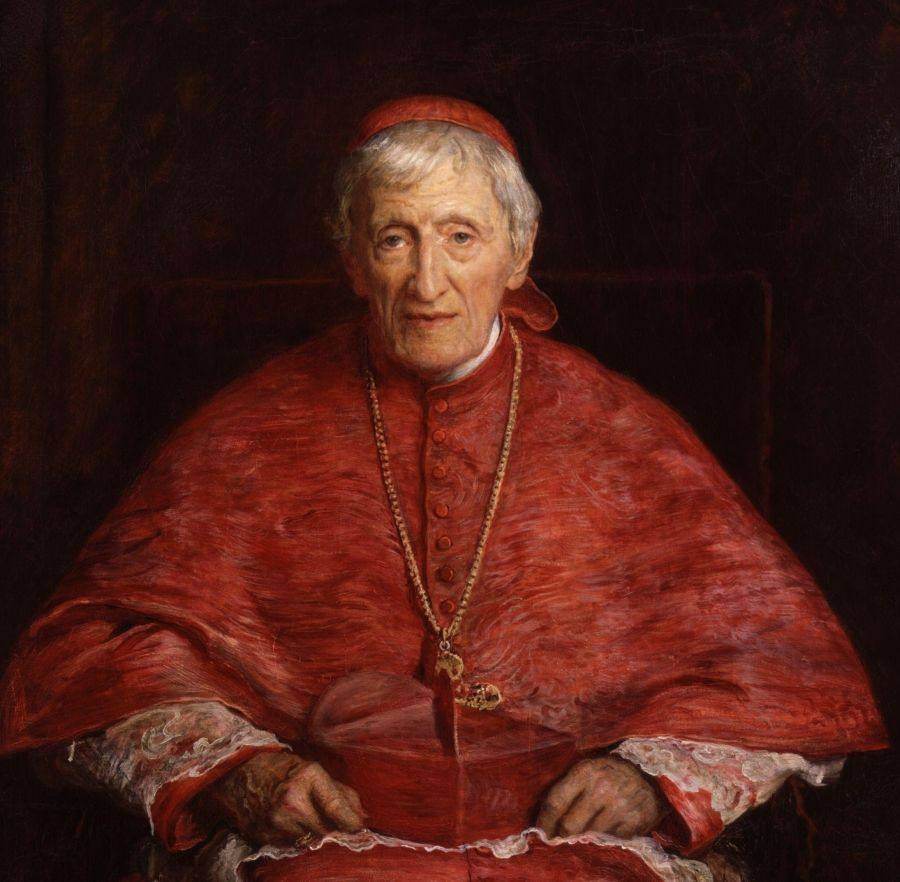 Today John Henry Newman is being officially declared a saint, meaning a hero of the faith. The greatest of Catholic theologians writing in English, he took up the modern challenges to Christianity before anyone else.

How we know what we believe by faith was one of the questions he explored so deeply. How Christians through history have grown in their understanding of the faith was another. What conscience tells us is a third. He also thought deeply about how Christians who have a first and final allegiance to God could still be good citizens, to the extent we can be.

Born in 1801, he died in 1890. He was one of the major influences upon the Second Vatican Council in the early 1960s. His Apologia pro vita sua is one of the most famous autobiographies in English.

Here is a good quick biography, here a good long one. His works can be found here. You can read the story of his death here and his insights into dying as a Christian here. I wrote about Newman’s insight into how much God loves us in God Needs You. If you’d like to know more about this saint business, read this explanation.

God’s Calling and Our Work

♦ To take up the cross of Christ is no great action done once for all; it consists in the continual practice of small duties which are distasteful to us.

♦ If we are intended for great ends, we are called to great hazards.

♦ Everyone who breathes, high and low, educated and ignorant, young and old, man and woman, has a mission, has a work. We are not sent into this world for nothing; we are not born at random; we are not here, that we may go to bed at night, and get up in the morning, toil for our bread, eat and drink, laugh and joke, sin when we have a mind, and reform when we are tired of sinning, rear a family and die. God sees every one of us; He creates every soul.

♦ He has an end for each of us; we are all equal in His sight, and we are placed in our different ranks and stations, not to get what we can out of them for ourselves, but to labor in them for Him. As Christ has His work, we too have ours; as He rejoiced to do His work, we must rejoice in ours also.

♦ A man would do nothing if he waited until he could do it so well that no one could find fault.

♦ Let us act on what we have, since we have not what we wish.

♦ God has created all things for good; all things for their greatest good; everything for its own good. . . . God has determined, unless I interfere with His plan, that I should reach that which will be my greatest happiness. He looks on me individually, He calls me by my name, He knows what I can do, what I can best be, what is my greatest happiness, and He means to give it me.

♦ Courage does not consist in calculation, but in fighting against chances.

♦ Living movements do not come out of committees.

♦ To holy people the very name of Jesus is a name to feed upon, a name to transport. His name can raise the dead and transfigure and beautify the living.

♦ Knowledge is one thing, virtue is another.

♦ Nothing is more common than for men to think that because they are familiar with words they understand the ideas they stand for.

♦ Without self-knowledge you have no root in yourselves personally; you may endure for a time, but under affliction or persecution your faith will not last.

♦ The glory of the Gospel is, not that it destroys the law, but that it makes it cease to be a bondage; not that it gives us freedom from it, but in it.

♦ Regarding Christianity, ten thousand difficulties do not make one doubt.

♦ It is as absurd to argue men, as to torture them, into believing.

♦ I sought to hear the voice of God And climbed the topmost steeple, But God declared: “Go down again — I dwell among the people.”

♦ The heart is commonly reached, not through the reason, but through the imagination, by means of direct impressions, by the testimony of facts and events, by history, by description. Persons influence us, voices melt us, looks subdue us, deeds inflame us. Many a man will live and die upon a dogma; no man will be a martyr for a conclusion.

♦ False ideas may be refuted indeed by argument, but by true ideas alone are they expelled.

♦ The Christian is cheerful, easy, kind, gentle, courteous, candid, unassuming; has no pretence, no affectation, no ambition, no singularity; because he has neither hope nor fear about this world. He is serious, sober, discreet, grave, moderate, mild, with so little that is unusual or striking in his bearing, that he may easily be taken at first sight for an ordinary man. (This is the quote Pope Francis used in his homily at the canonization.)

♦ The world is content with setting right the surface of things.

♦ In this day especially it is very easy for men to be benevolent, liberal, and dispassionate. It costs nothing to be dispassionate when you feel nothing, to be cheerful when you have nothing to fear, to be generous or liberal when what you give is not your own, and to be benevolent and considerate when you have no principles and no opinions. Men nowadays are moderate and equitable, not because the Lord is at hand, but because they do not feel that He is coming.

♦ With Christians, a poetical view of things is a duty. We are bid to color all things with hues of faith, to see a divine meaning in every event.

♦ Boys do not fully know what is good and what is evil; they do wrong things at first almost innocently. Novelty hides vice from them; there is no one to warn them or give them rules; and they become slaves of sin, while they are learning what sin is.

♦ We should ever conduct ourselves towards our enemy as if he were one day to be our friend.

♦ The love of our private friends is the only preparatory exercise for the love of all men.

♦ Good is never accomplished except at the cost of those who do it, truth never breaks through except through the sacrifice of those who spread it.

♦ In a higher world it is otherwise, but here below to live is to change, and to be perfect is to have changed often.

♦ Growth is the only evidence of life.

♦ God has created me to do Him some definite service. He has committed some work to me which He has not committed to another. I have my mission — I never may know it in this life, but I shall be told it in the next.

♦ Somehow I am necessary for His purposes, as necessary in my place as an Archangel in his. … Yet I have a part in this great work; I am a link in a chain, a bond of connexion between persons. He has not created me for naught. I shall do good. I shall do His work. I shall be an angel of peace, a preacher of truth in my own place, while not intending it, if I do but keep His commandments and serve Him in my calling.

♦ Fear not that thy life shall come to an end, but rather that it shall never have a beginning.

♦ May it be our blessedness, as years go on, to add one grace to another, and advance upward, step by step, neither neglecting the lower after attaining the higher, nor aiming at the higher before attaining the lower. … May we learn to mature all graces in us — fearing and trembling, watching and repenting, because Christ is coming; joyful, thankful, and careless of the future, because He is come.

♦ May He support us all the day long, till the shades lengthen and the evening comes, and the busy world is hushed, and the fever of life is over, and our work is done. Then in His mercy may He give us a safe lodging, and a holy rest and peace at the last.

This list has been added to since the article appeared this morning. Newman wrote so much good stuff, you want to keep sharing it.

Why We Don’t Really Want Heaven