New Documentary Never Again? Sheds Light on Anti-Semitism and the Unlikely Friendship of a Former AntiSemite and a Holocaust Survivor 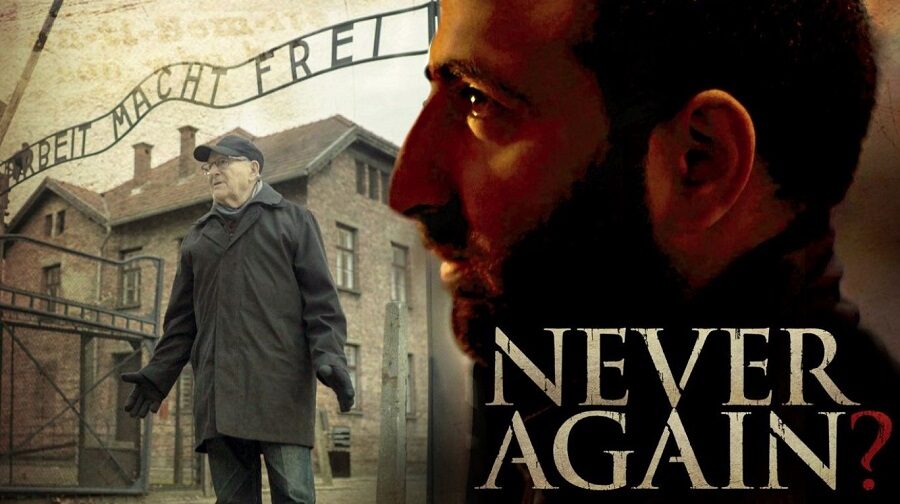 Irving Roth was a teenager when a cattle car took him to Auschwitz. He lost his brother, one of 6 million Jews, to the horrors of the Holocaust. Irving miraculously survived, along with his mother and father.

Kasim Hafeez was born in London to Pakistani parents. Hatred of Israel and the Jews was part of his life growing up, even though his family didn’t interact with any Jews.

Never Again?, a new documentary, follows Kasim’s from anti-Semitism to a friendship with Irving and the Jewish people.

ReelWorks Studios and Upper Falls will release Never Again? to On Demand and VOD Platforms June 7, 2022, and to DVD June 21, 2022.

“There was this hatred directed to a community and people that we just had no interaction with,” Kasim told The Stream. “So, for me growing up, that was just, it became a reality. If you consistently hear a message from when you were four or five years old, and there’s nothing that’s challenging that or trying to give a different opinion, it just becomes reality.”

When Kasim was a young man, some men from an extremist group spoke with him. They used Islam as a recruiting tool to help further the divide between his community and the country he lived in. Kasim explained:

It essentially creates this mix of taking young, angry men, using the religion that they’ve grown up with, which is so integral and key to them, using that to give them an identity and a sense of belonging and making them hostile to the society that they’re in, but also at a deeper level using the antisemitism, which is sadly way too common in communities. … And as I went off to college, you know, that antisemitism was only spread even more by what was happening on college campuses.

The acceptance of antisemitism was widespread.

It wasn’t until Kasim read The Case for Israel by Alan Dershowitz that he began to realize that he was wrong in his antisemitism. He bought the book with the idea that he would validate his own bigotry and hatred. “I was so convinced that I was right, that I thought it would give me an insight into essentially my ‘enemy.'” That was the starting point, but it was still a process. “That process would last a few years,” said Kasim. “And that would eventually take me to Israel.” Kasim went to Israel expecting to see the “very worst” of bigotry against him, as a non-Jew. At the Western Wall in Jerusalem Kasim really got how toxic and poisonous his views and opinions had been. He did not experience the bigotry or hatred he had expected. He knew he couldn’t hold the poisonous views anymore. “I had to change.”

Kasim met Irving when Kasim was on staff at Christians United for Israel. They developed a friendship. “Irving had experienced the very worst of antisemitism in our modern time,” Kasim explained. The Holocaust didn’t appear in isolation. And even though Kasim went to British schools, he had developed the disdain and hatred for Jews — the same vitriol that fueled the Nazis. “So, there’s an interesting juxtaposition there.”