Nasty Women Writing a Horrifying History of Our Times

What are we going to do about it? 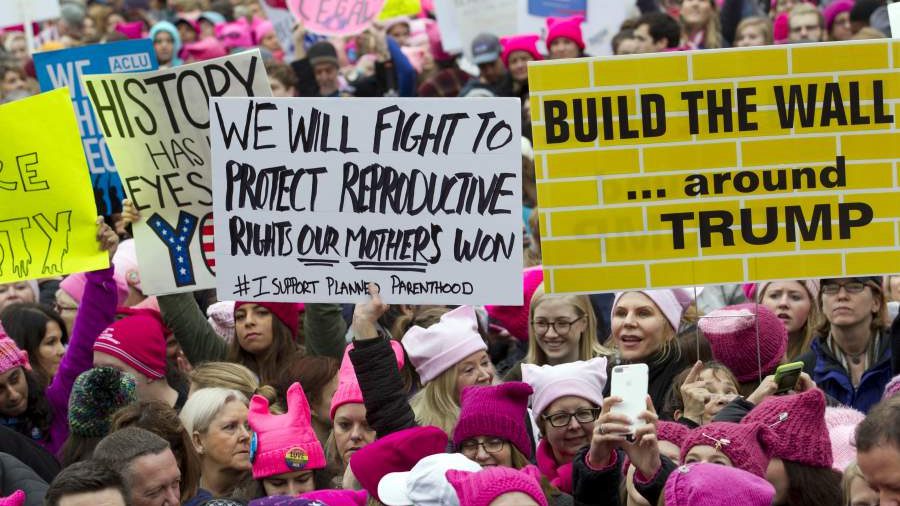 Women with bright pink hats and signs gather for the massive "Women's March", Saturday, Jan. 21, 2017 in Washington. The march turned into a crass and vulgar display that only encourages the devaluation of women.

I remember an important lesson my parents began teaching me as a young lady. It’s a lesson that has been lost to the liberal tyranny of the crass, and the proof was the Women’s March in Washington D.C. last Saturday.

It’s a simple lesson on its face, but very significant, with far-reaching effects. It was this: As a woman, you teach a man how to treat you.

(That is not meant in any way to disparage men, or to imply that they are too dense to figure things out for themselves.)

What they wanted me to understand was that I had to decide what sort of woman I would be, and that my own behavior would largely determine how I was treated by men. Dad also wanted me to know that if any boorish man treated me badly, and I tolerated it, then I was teaching him it was okay to be a pig, and at that point, I was my own worst enemy.

The point is, by and large, men want to do right by women, so it’s incumbent upon the ladies to inspire them. Men aspire to honor and nobility, and most will respond accordingly when a woman encourages that behavior. I still believe men are inclined to take their cue from the ladies. Unfortunately, a man who is prone to lesser standards won’t need much encouragement at all to sink even further, and when women themselves behave badly, and tolerate bad behavior from a man, then mud begets mud and more mud.

Before anyone screams that I’m blaming the victim, I am not justifying the bad or criminal behavior of men by saying it’s the woman’s fault. Men are always responsible for their actions.

That brings me to the gargantuan display of crassness that came out of the Women’s March. The profanity and vulgarity exhibited there was disgusting and embarrassing. We’ve all read about or heard Madonna’s foul-mouthed rant, and the same for Ashley Judd’s filthy speech praising nastiness among women as some new badge of honor.

If all that wasn’t enough, the signage carried by non-celebrity women was every bit as crude as what Madonna and Judd spewed from the podium. Grown women walked around dressed in vagina costumes. They wore hats sporting cat ears — a reference to the crass synonym for female genitalia. They carried signs that read, “P**** Grabs Back!” and “The Future is Nasty!” I saw one photo of a mother pushing her two little daughters in a stroller and pinned to the stroller was a sign reading, “Stay Nasty!” (Yes, I do understand the reference to Trump calling Hillary a nasty woman.)

I saw one woman holding a sign on which was painted the full female reproductive system with the slogan, “This Machine Kills Fascists!” What that could possibly mean, I can’t fathom.

The photo that tore my heart was one of a little girl about 3 years old holding onto a big sign in front of her that read, “F*** Your Fascist Bulls***”. Her mother was standing behind her smiling. What kind of woman does that to her daughter?? And last but not least, the photo of a man wearing a bright pink bra over his coat, with a sign that said, “Go Ahead Trump. Grab My P****”. His little daughter and son were standing there with him. What do you suppose those children learned? It seems clear that nasty is the new liberal “feminist” mantra. These women have responded to the degrading talk of a man they despise by being every bit as degrading, except it’s worse because they’re doing it to themselves. And they foolishly believe it makes them powerful or something. It doesn’t. It makes them gross and vulgar.

They’ve decided that nasty is a compliment, and they’re determined to prove just how nasty they can be. On that note, they sure succeeded. They’ve made it perfectly clear that as women, they are merely parts to be objectified. They — not Donald Trump — they have reduced women to nothing but their sexual parts. They have taught every man watching that their womanhood is not a thing of dignity or beauty, but something nasty that revolves entirely around sex. A woman is not a person to be taken as a whole and cherished and protected, but sexual pieces to be dehumanized and profaned.

Their example won’t be forgotten. Nasty women will inspire nasty treatment. Guys will feel free to refer to the female anatomy in crude “locker room” terms, cause hey! The women are doing it themselves!

We expect the men to be decent and honorable when the women are so indecent and vile? How does that work?

Their Killer Motive, The Unimaginable Consequences

Underscoring all the nastiness, of course, was the premier motive of the whole march: Abortion on Demand and Without Apology! We shall kill the“unwanted” if we jolly well want to, and don’t you dare try to take away our “rights!”

This is the tone liberal women in America have set. Genitals on display; crassness, vulgarity, and nastiness, loud and proud; and an absolute, irrevocable license to kill. These are the maxims of women who decry the intolerable offense of a man who once simply took them at their word. (They still love Bill Clinton and Roman Polanski though. Never mind their rapist, lecherous tendencies.)

Ladies and gentlemen, the history being written by the profane conduct from the Women’s March is too horrifying to contemplate. I ask you: what are we going to do about it?