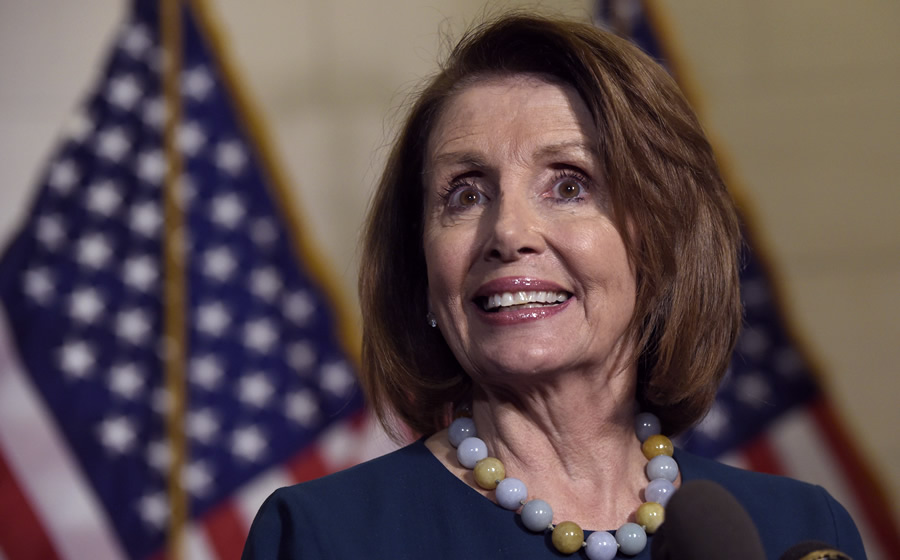 Nancy Pelosi just made history. She gave an eight-hour speech that broke Congressional records. Now, there’s no filibuster in the House, so she accomplished exactly nothing. In fact, her allies are grousing that her tactics are counter-productive — even for her stated purpose of helping illegal immigrants smuggled in by their parents. (“DREAMERs,” to use the propaganda acronym created by its partisans.) As Ed Morrissey opined at Hot Air, “Pelosi’s colleagues wonder whether she intended to move the issue at all, or whether she was covering her behind after selling them out.”

In fact, she and the rest of the Democrats had already rejected an absurdly generous deal offered by President Trump, which would have amnestied almost 2 million. That’s more than double the number who signed up under Obama’s unconstitutional edict DACA. Democrats threw Trump’s deal back in his face, calling it a “white supremacist ransom note.”

That’s false on so many levels I’m actually impressed. The left has outdone itself. Trump’s deal would have let hundreds of thousands of illegal aliens stay in the U.S. and enjoy affirmative action at the expense of white male war veterans. Just because their parents snuck them in. That’s a lot of things. (Lawless for one). But it’s hardly racist.

Nor are these people in any sense hostages. Unless, of course, you believe that they’re in danger. That would only be true if the (incredibly faint) prospect of returning them to their home countries would be a death sentence. And if that were the case it would mean that their home countries were. …

What’s that word the president supposedly used? Ah yes, I believe it was “cacastans.” Catholic bishops such as Blaise Cupich of Chicago and Daniel Flores of Brownsville are even harsher. They consider Mexico and El Salvador medical waste dumpsters, since each bishop equated the “evil” of deporting illegal immigrants to such countries to expelling unborn babies and leaving them in biohazard bags.

The immigration nepotism scheme drawn up by Teddy Kennedy on a bar napkin in 1965.

Why did the Democrats reject the deal? Because it included funding for a border wall, and cuts to chain migration. That’s the nepotism scheme drawn up by Teddy Kennedy on a bar napkin in 1965 whereby anybody who gets U.S. citizenship (say, via amnesty) gets to import his extended family. That policy serves no national interest. It obeys no moral law. All it is does is mint new Democrat voters and welfare recipients. Democratic presidential dreamer Julian Castro virtually admitted as much last week that his party could gain a lock on the presidency by flipping Texas and Florida via immigration.

So let’s be clear. The Democrats want to leave the smuggled immigrants in limbo indefinitely. They won’t accept mass amnesty on a gold-plated Trump Tower platter. Not if it means building a border wall that would stop more immigrant smuggling, or a law that prevents each amnestied illegal from inviting all his cousins to become Democratic voters, too. Which side is holding hostages again?

A Prophet Without Honor. Really, Not a Trace of It.

Which brings us back to Pelosi. In defense of the Democrats rejection of Trump’s proffered deal, she did her turn as a drama queen for eight long hours. In high heels and fashionable clothes, this resident of one of America’s most expensive districts played the biblical prophet, clawing for the moral high ground.

It is humanly impossible for anyone to read the entirety of Pelosi’s speech. I don’t think a single member of Congress stayed to listen to it in full. For those seeking Lenten penances, here is a link to the transcript. Pelosi threw in every imaginable cliché, recited poetry aloud, slapped in every tangentially relevant passage from the bible, and read long passages from statements by U.S. Catholic bishops. That really shows the stink of desperation. I’m confident even the bishops themselves don’t read those hundreds of policy statements. I think a Catholic B.S. Generator [MILD PROFANITY] bot on some staffer’s laptop just randomly strings together words like “marginalized”, “compassion”, and “social justice” then sends them out to the press.

Pelosi threw in long tearjerker stories of valedictorian “DREAMERs” who rescue stranded transgender kittens from ISIS. She cited evangelical leaders who joined open borders groups bankrolled by George Soros. She claimed that America would choke and die of decrepitude if it were forced to do without more than a million low-skill immigrants every year. Because you see (hold your nose) mere Americans and their children aren’t worth very much. They must be supplemented, then supplanted.

I won’t wade through the whole of Pelosi’s historic platitude dump. Nor should anyone — unless he’s compiling a dictionary for demagogues. Instead, let’s look back a few years at an incident that exposed Pelosi’s true moral compass. Remember when she said that abortion is sacred to her, as a Catholic? No, I’m not making that up. Even I’m not snarky and misanthropic enough to come up with such stuff. Read all about this incident in my judicious essay of 2013, “Is Nancy Pelosi a Satanist?”

My verdict was “inconclusive,” since it’s technically possible that Pelosi is in fact instead an Aztec, and favors human sacrifice to various gods to keep the sun well-fed with blood. So it doesn’t wink out of the sky. That’s what Pelosi also thinks will happen if America ever regains control of its bleeding borders. And if you don’t believe me, give Nancy eight short hours. She’ll explain the whole thing to you.