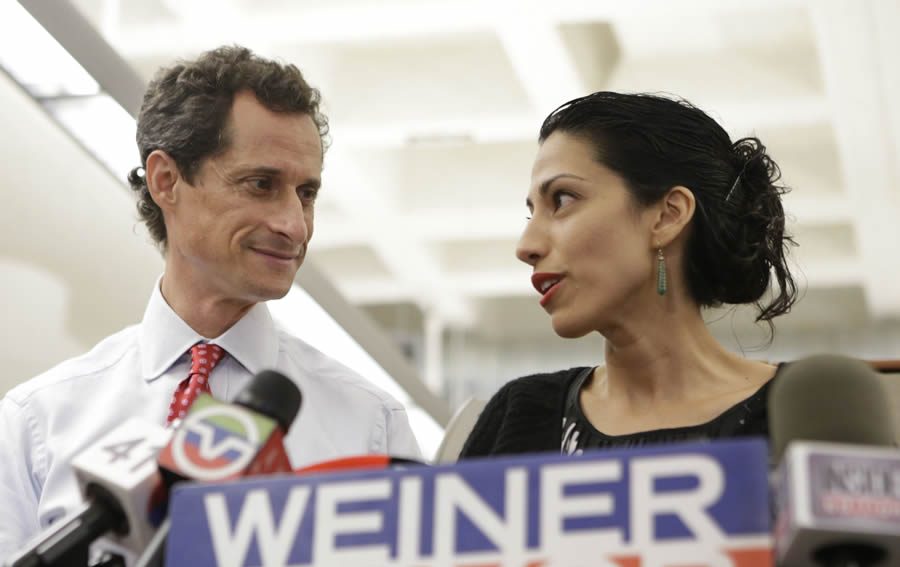 One of the many bizarre and unsettling aspects of the prospect of Hillary Clinton as president is her close advisor Huma Abedin. It’s easy to get lost in the squalid and sordid details, so let’s get those out of the way right at the outset. The reason that Hillary Clinton is sinking in the polls right now — and even if she wins might need a pardon from Obama to stay out of prison — is that she seems to have broken the law and lied about it to Congress and the FBI, then tried to destroy the evidence.

The Clinton campaign apparently knew as long ago as 2011 that Weiner was sexting with women under age 18, but took no action — such as, you know, calling the police.

Evidence of what? Of the fact that she’d been breaking State Department policy by hoarding classified official government emails on an insecure private server, created to let her evade Freedom of Information Act requests. (Iraq war hero General David Petraeus was threatened with prison for doing much less.) Reporters might have liked to inquire about the huge cash payments which Bill Clinton was raking in via the Clinton Foundation. Did they result in Hillary granting State Department access or favors to foreign governments (like the Russian or Saudi regimes) that coughed up the money? Last summer it seemed we might never know. Under pressure from the White House, and after a private tarmac meeting between Bill Clinton and the attorney general, the Justice Department pressured the FBI to stop the investigation into Clinton. But now that investigation has started up again, thanks to Huma Abedin. And her lousy taste in men.

You really should watch the hilarious documentary Weiner for the full story slow-motion train wreck, but it boils down to this: Huma’s now-estranged husband, former Congressman Anthony Wiener, is apparently addicted to sexting. Exposure of his behavior forced him out of Congress. He apologized, got forgiveness, and ran for mayor of New York City. Then it turned out he hadn’t stopped doing it. It seemed he was still sending naked selfies to strangers. He apologized again, but came in last in the mayoral race.

Now it emerges that Weiner can’t stop himself, and that one of his recent online “partners” was a 15-year-old girl. As the Daily Mail reports, citing Wikileaks documents, the Clinton campaign apparently knew as long ago as 2011 that Weiner was sexting with women under age 18, but took no action — such as, you know, calling the police. It is unclear whether Clinton’s team informed Abedin.

When Weiner’s online child molestation became public, the FBI had no choice but to look into that, and when they did — and perhaps when Weiner decided to cut a deal — they found on Weiner’s laptop hundreds of thousands of emails, including ones to and from Hillary Clinton dealing with State Department business. Which might be the very evidence which she’d thought safely destroyed. God is just, and he has a dark sense of humor.

But what about Huma? Ms. Abedin stood by her man through the first two scandals, but the third time crossed the line, and she moved out with their son. So she’s a tragic wronged wife, right? A bright-eyed, glamorous wunderkind child of immigrants, who married the wrong man and tried to save her marriage? Well, maybe. But there’s much more to the story.

America once believed that Huma’s mentor Hillary was precisely such a wounded but loyal wife. We have since learned — thanks to films such as Clinton, Inc. — that Hillary’s public willingness to back up her husband’s stories against one female accuser after another was part of a cynical political arrangement. She traded televised “forgiveness” for tangible political favors — such as the Democratic Party’s nomination for Senate in a state where she’d never lived, New York. What did Huma get in return for sticking with Anthony Weiner — a once up-and-coming, famously caustic far left-wing congressman from Brooklyn? We may never know.

What we do know of Huma Abedin — beyond the facts revealed in Weiner, such as that she won’t cook breakfast except in a $10,000 dress — can be listed as follows.

Huma Abedin has never publicly renounced or condemned any of the views which she helped disseminate through her family’s journal — although Donald Trump was pressured to condemn the extremist Tweets of fringe supporters whom he has never met or been in any contact with. Since Abedin is Clinton’s closest advisor, and seen as a likely pick for White House Chief of Staff, these questions about her deep, lifelong connections to America’s most dangerous enemies must be answered.