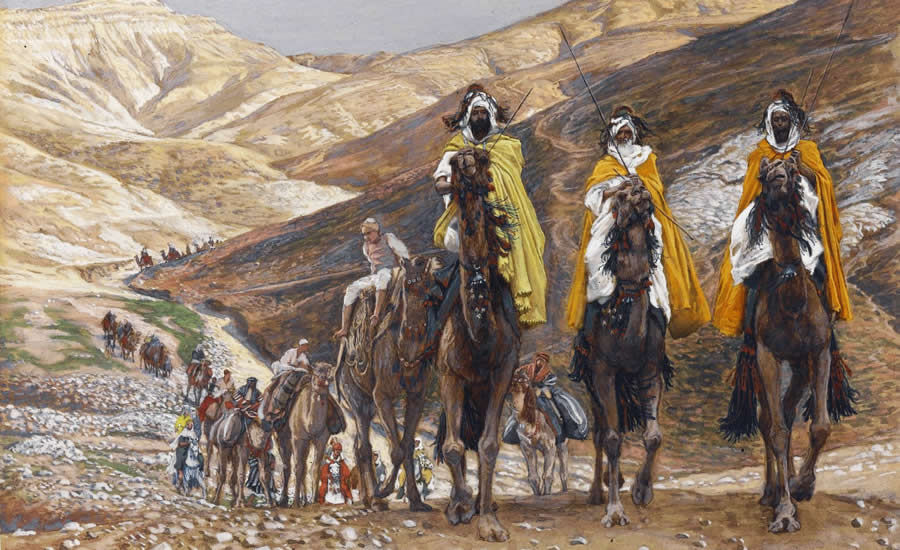 This article originally appeared on The Stream, December 21, 2020. With Epiphany approaching Friday we decided to repost this fascinating interview.

It’s one of those biblical stories guaranteed to generate a smirk from the anti-Christian scrooges. Indeed, it does seem fantastical: Magi from a distant land cross the desert bearing gold, frankincense and myrrh for little baby Jesus. Toss in a magical star that guides them, and who wouldn’t be suspicious?

Yet, Stream contributor Fr. Dwight Longenecker has done something rather wonderful. He actually studied the scriptures, dug deep into the historical background, and solved the mystery of the Magi. Yes, they were real and he tells us who they are in a phenomenal book called Mystery of the Magi: The Quest to Identify the Three Wise Men.

We were able to grab Fr. Longenecker during this busy holiday season to ask him about the Magi. The interview has been slightly edited for clarity.

The Stream: Your subtitle is ‘The quest to identify the three wise men.’ What sent you on your quest?

I was asked to write an article about the Magi and decided to look at the Old Testament prophecies in Psalm 72 and Isaiah 60. They indicated that the magi came from Sheba, Seba, Ephah, Midian and Kedar. Sheba and Seba are the same. This is the Kingdom of Sheba from which the Queen of Sheba came to pay homage to King Solomon. Sheba was located in Southern Arabia — present day Yemen. Midian, Kedar and Ephah are tribes settled in Western Arabia, present day Jordan and Saudi Arabia.

This was contrary to the majority opinion that the Magi came from Persia, so I began to look into this alternative origin of the Magi and found that the facts fit Arabia far better than Persia.

The Stream: Let’s clear away the brush. We all know the image of the three wise men from Christmas pageants and songs. What in our Christmas ‘mythology’ can we eliminate when searching for the truth about the Magi?

The Magi story is the most elaborated story from the New Testament. As early as the beginning of the second century the extra Biblical writings were exaggerating the story and embellishing the story with extra meaning and extra details. Some of these embellishments were done by early church preachers — others were done by heretical groups — Gnostics and groups influenced by the heretical teachings of the prophet Mani (Manicheanism). I went back to Matthew’s gospel and cleared away the clutter.

What is some of the clutter? That there were three. Matthew never says that. That they were kings. This was a preaching point drawing conclusions from the prophecies of Psalm 72 and Isaiah 60. Matthew doesn’t say they were kings.

Camels? That also comes from Isaiah 60 not Matthew.

That they followed a magical star that led them on a long desert journey? This comes from fifth and sixth century gnostic writings about the Magi.

That they have names Balthasar, Melchior and Gaspar? In the fifth and sixth centuries there are about a half dozen extra Biblical versions from different areas of the Middle East — all with different sets of names.

That they were the three ages of man — old, young and middle aged? That they represent the three racial groups? This is from the eighth century and further into the Middle Ages. Matthew doesn’t mention any of these details.

The Stream: Now that we have three kings from the orient out of the way, what are our solid clues from scripture?

Matthew says they came “from the East.” He was writing to the Jews in the area of Jerusalem-Judea. For them “the East” was the huge territory controlled by the Nabateans — present day Saudi Arabia, Jordan, Syria, most of Iraq and Lebanon. We know this was “the East” for them not only because that kingdom lies to the East of Judea, but also because in the Old Testament “the people of the East” most often refers to the various tribes of the Arabian peninsula.

The Stream: How important is it to grasp how Matthew’s readers would have understood what he was saying?

They used the term “the East” to refer to this territory as we would refer to “the South” and everyone knows that means certain states in the U.S. Also, in the Old Testament the “people of the North” are the Assyrians and Persians — present day Iran — because you traveled North and then East to get there.

The Stream: So who were the Nabateans? And why would they … or specifically, counselors to the Nabatean king … be interested in some Hebrew prophesy about a Messiah?

The Nabateans were a trading nation controlling the trade routes from Yemen across the Arabian desert to the Mediterranean port of Gaza and from Egypt North to Syria and beyond. Their capital of Petra was at the crossroads of these two important routes. They traded in luxury goods from India and China through Yemen and back with goods from across the Roman Empire. Gauze? It came from Gaza. Damask fabric? It came from Damascus.

The Nabatean culture at the time of Jesus’ birth was a blend of Abrahamic tribes that had wandered in the Arabian desert, immigrants from Babylon who occupied the Arabian peninsula and the influence of the Greeks. Petra was therefore a very cosmopolitan city with the traders bringing not only goods, but culture influences from the ancient world from China to Greece and Rome and from Africa North to Syria, Persia and present day Turkey.

As wise men they would have been astrologers, but also students of the prophecies from the different cultures — including the Jewish prophecies. At the downfall of Jerusalem in 586 B.C., many Jews went into exile — not only to Babylon, but into the Babylonian controlled territory of Arabia. Some think the second portion of the book of Isaiah was actually written there, and this includes the important prophecy in chapter 60.

The Stream: So there was a Jewish and Messianic strain within the Nabatean culture, which gives them some ‘skin in the game.’ But why journey to Herod and seek out this baby Jesus?

My theory is that the Nabatean King Aretas IV wanted to establish good diplomatic relations with Herod for reasons I outline in the book and he sent a diplomatic mission to the court of Herod the Great on news that a new King of the Jews was born. They assumed this King of the Jews would be a grandson of Herod.

The Stream: So historically speaking, the journey was not necessarily fantastical or mystical. There is a practical, political and diplomatic explanation. What about the gold, frankincense and myrrh?

The finest gold in the ancient world was mined in Western Arabia and North East Africa — territory controlled by the Nabateans. The bushes from which incense and myrrh are harvested only grow in the Arabian peninsula. Therefore the three gifts were representative of the Nabatean kingdom — perfect tribute gifts therefore from one kingdom to another.

The Stream: Earlier you mentioned the camels. Any historic basis for that legend, or do I have to get a new nativity set?

Lots of people ask about the camels. Have you ever heard of Arabian horses? The Nabateans bred and traded in Arabian horses. They were the luxury transportation of the day. Camels were the tractor trailers. Arabian horses were the BMWs. The wealthy diplomats from one court to another would most certainly have ridden on Arabian horses — not camels. They may have used camels as pack animals however. Also — the trip from Petra to Jerusalem would have been along well-traveled roads — roads well-known to the Magi. Matthew doesn’t say the star led them to Jerusalem. He does say the star directed them from Jerusalem to the house in Bethlehem, however.

The Stream: What do the historical facts you lay out do to help support the biblical truth of Jesus’ birth?

Because Christmas is so cluttered up with sentimental, magical elements — from red-nosed reindeer, talking snowmen and Santa’s elves — it is easy to write off the mystical wizards from the East with their magical star as just another fairy tale. And, therefore, it is also easy to write off the virgin birth, the shepherds, and the singing angels as a pretty fairy tale.

I wanted to show that these stories are rooted in history even though they have been cluttered up over the years with all kinds of elaboration and embellishment. This is important because the Christian faith is based in real historical events. Jesus is not just a fairy tale. He is a real historical character — and the more we know about his life and times, the more we will realize that he is Emmanuel, God with us.

There is much more to the story in Fr. Longenecker’s book. If you can, please add Mystery of the Magi: The Quest to Identify the Three Wise Men to your Christmas and New Year’s reading list. It also makes a fantastic gift, even for … perhaps particularly for … non-believers.

The Truth About Christmas