Trump was wrong when he said Mueller had no "material." It's just that the material given him was rotten to the core. 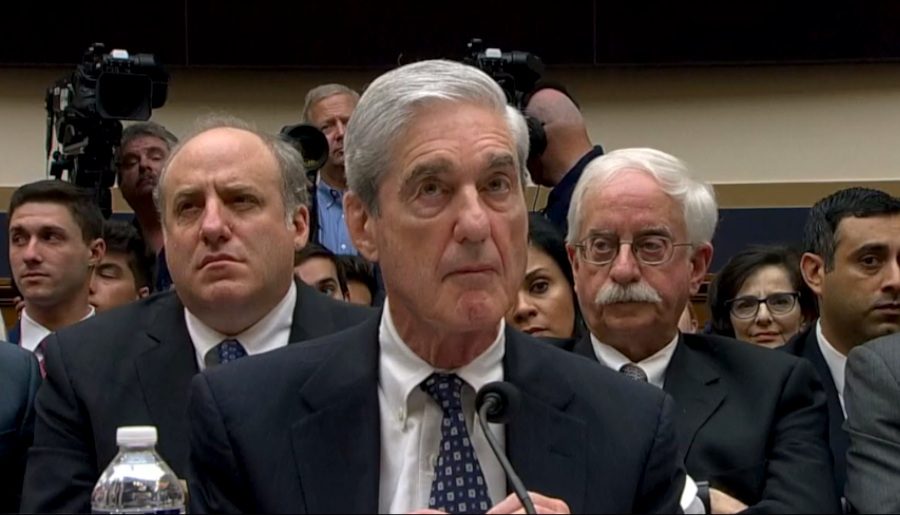 “We want Robert Mueller to bring [his report] to life,” said Rep. Adam Schiff, head of the House Intelligence Committee.

By the end of today’s hearing, Schiff would have been happy bringing Mueller — or at least his credibility — back to life.

To summarize what a letdown his tired, utterly unaware performance was we need look only to liberal filmmaker Michael Moore.

In February of 2018, Moore taunted Don Jr. on Twitter:

Don Jr. Here’s what’s amazing. When Mueller takes you & your brother-in-law away in chains, & then offers your dad this deal – ‘Resign the presidency now & we’ll let Don Jr & Jared go’ – you’re going to find out what a sociopath your father is as he throws his own son under the bus.

Today, Moore tossed in the towel.

A frail old man, unable to remember things, stumbling, refusing to answer basic questions…I said it in 2017 and Mueller confirmed it today — All you pundits and moderates and lame Dems who told the public to put their faith in the esteemed Robert Mueller — just STFU from now on

Even worse for the Topple Trump crowd, whatever energy Mueller could muster in the afternoon hearing was used to stomp out their morning meme. Mueller refuted the claim that he would charge Trump with obstruction if he wasn’t in office.

I want to go back to one that that was said this morning by (Rep. Ted) Lieu, who said, and I quote, ‘you didn’t charge the president because of the OLC opinion.’ That is not the correct way to say it. As we say in the report … we did not reach a determination as to whether the president committed a crime.

The special counsel’s job was to make a determination. He couldn’t make the case. Normally, that would be that. Instead, Mueller’s Trump Hunters — if today showed anything it’s that Mueller himself had little to no involvement in any of this — turned the presumption of innocence upside down.

They could not clearly exonerate President Trump, they wrote. Mueller parroted this today. Rep. Mike Turner (R-OH) was having none of it. Prosecutors do not exonerate. Said Turner, “You had no more power to declare him exonerated than you have to declare him Anderson Cooper.”

So why did Mueller’s Squad bring this exoneration business to the table? So Democrats could feast on the dream of impeachment. As Turner pointed out, CNN spent most of the day with the headline “Mueller: Could Not Exonerate the President.” Today’s hearing was meant to be “impeachment round one,” said Andrew McCarthy on Fox News.

By day’s end, the only people whose jobs were in danger were those who decided dragging Mueller up to Capitol Hill was a good idea. At a Democratic press conference late this afternoon, Judiciary Committee chairman Jerry Nadler looked like he’d just discovered his accountant had just run off with his dough and his dog.

(Nancy Pelosi? Forget whatever she said. Her eyes said, “Thank God. Maybe now this will shut the crazies up about impeachment and we have a chance of keeping the House.”)

An NBC analyst had predicted that a massive audience would tune in. People wouldn’t read the “book” — a.k.a. The Mueller Report — but they would watch the “movie.”

It might as well have been a silent movie. How many times did Robert Mueller “deflect, decline or defer a question during the hearings?” According to NBC News, 198 times.

He decidedly avoided any questions about origins of the whole Trump-Russia collusion investigation and narrative.

President Trump said this afternoon that he didn’t totally blame Mueller for Mueller’s performance. He said the special prosecutor “didn’t have any material.” This is not quite true. Mueller was given Home Depots filled with material. Material that on close inspection proves to be completely chewed up by termites. He also started with a foundation of corrupt intent. The seditious “insurance policy” of FBI and Obama officials hellbent on taking Trump out. Upon that foundation, Mueller’s Squad built their termite-weakened house … and under the weight of honest scrutiny that house collapsed.

The questions Mueller refused to answer prove a clue. Fundamentally, answering the question, “How in the world did we get here?” Those answers will rock the world.

TRUTH IS A FORCE OF NATURE!

“Truth is a force of nature!” Trump tweeted. Like a storm.