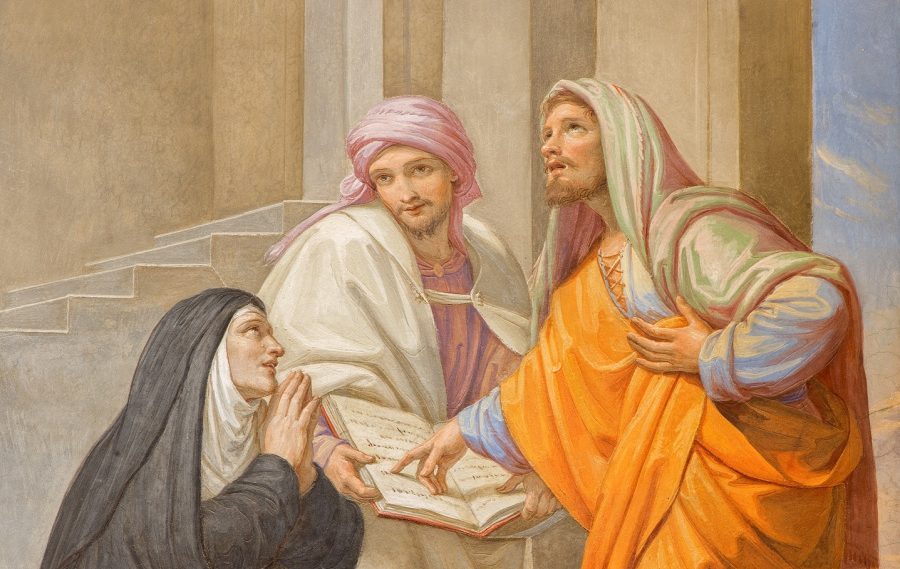 The conversion of Augustine, with his mother Monica and his mentor Ambrose, meeting around the Scriptures.

Last Wednesday marked the 31st anniversary of “the last day of the rest of my life,” he said. The next day, “God stepped into the world of this drunk, broken and desperate to die boy and pulled me out of a pit my own hands dug.”

Why did God rescue John Yeatts? Because his mother and his grandmother prayed for him.

John’s now the campus pastor for Life Outreach International. He’s also national coordinator of Churches for Life. His mother and grandmother “never ceased to call out my name before the LORD,” he wrote in a message to the LOI staff.

“He honored their prayers and their faith to bring me life. Thirty-one years later, I sit here as a reminder that the prayers of the righteous bring a great harvest. The sincere faith of a mother and grandmother never goes unnoticed by God or their family. In so many cases, it truly is the light that lit the path to our day of salvation.”

God heard their prayers. But so did John. He thinks of “Men and women like me remembering the cries and the tears coming through the walls for God to pardon our sins and heal our hearts, to rescue us from the darkness that held us.” How great a witness of God’s love is one of His people giving themselves to pray for you? If they love you so much, that they weep because you don’t know Jesus, how much more must God love you?

John’s not the only pastor who came to know Jesus because his mother prayed for him. Maybe the most famous praying mother in Christian history was a woman in 4th century north Africa named Monica. Her husband wasn’t a believer. In fact, the opposite. He disliked her religion. He was a government official with no time for that stuff.

Her one child wasn’t a believer either. He was very, very smart. He ran after all the day’s interesting philosophies and ideas. Except his mother’s, of course. But her son wasn’t a nerd stuck in his room with his books. He was one of those people who managed to live two lives at full speed. He was also very wild. Monica’s son enjoyed his wine, his women, and his songs. An intellectual and a party animal. He had it made. Why would he give up all that to become a Christian?

Monica wept a lot over his life. Not just the partying either. The running after false ideas too. Both kept him from God. She followed him around the empire, praying all the time. And finally, after 17 years of praying for him, her son found Jesus. And later so did her husband, after as many as 30 years of tears and prayers.

That son was named Augustine, better known nowadays as St. Augustine and one of Christianity’s most formative thinkers. Both Catholic and Protestant theology descends from his. His fingerprints can be seen on a lot we still think and do today. He wrote the first real autobiography, the Confessions. His On the Trinity helped deepen Christians’ understanding of how God could be Three in One, which sounded batty to a lot of people. His On Christian Doctrine was one of the first careful explanations of how to teach the faith.

Augustine wrote the first major work of Christian political philosophy. We call it The City of God, but the real title is On the City of God Against the Pagans. He worked out how Christians could be in the world but not of the world. The Vandals had sacked Rome a few years before. Christians needed to know how to live in a world falling apart. (It’s a book suddenly even more relevant than it was.)

To get the whole story, read this article by Casey Chalk, who’s written for The Stream. Or listen to this talk by Constance Hull. She explains why “We must trust that He is always at work and sometimes we need to get out of the way and allow the people He sends to help our loved ones do His work.” Read this article if you want to know how Monica died, with Augustine at her side.

Augustine wasn’t the only person blessed by Monica’s prayers. Almost every Western Christian today benefits from what he wrote and did after he met Christ. She did all that weeping and praying for him, but she also did it for us.

Not every mother who prays her wayward child to Christ will have a John Yeatts or an Augustine. Sadly, not every mother who prays sees her child come to Christ while she’s alive. The child can always say no. But God is faithful and will give the child every good the child will take. He tells us to pray and He will do the rest. We just need to remember that prayers don’t work like magic. We need to keep praying, as a duty and as a calling. Maybe for 17 or even 30 years.

Faithfulness is everything. Upset over her son’s continued waywardness, Monica went to her pastor for advice. Augustine himself tells us the story. The pastor told his mother he wouldn’t talk to Augustine. He was too conceited to listen. “Leave him alone,” he said. “Simply pray for him to the Lord.” He promised that her son would eventually see the truth.

But that didn’t make Monica feel better. She begged for help. “Go away now,” her pastor told her. But he wasn’t blowing her off. He recognized the power of prayer. “Hold on to this,” he said. “It is inconceivable that he should perish, a son of tears like yours.”