(Now that all the earlier ones have proven true.) 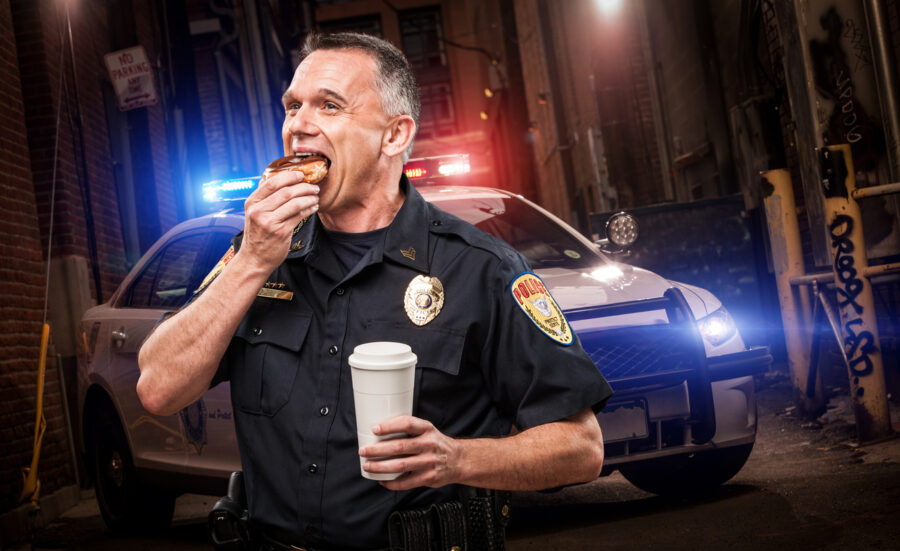 Go ahead, officer. You deserve the treat.

If today’s Brew doesn’t get the heart pumping, this first story will.

Fox’s drama 9-1-1 has nothing on reality. On Sunday, LAPD’s true-to-life heroes pulled a pilot out of his crash-landed plane just seconds before the plane was obliterated by a train.

The pilot was forced into an emergency landing in Pacoima after losing power, and ended up on the train tracks. Thankfully, the plane landed near an LAPD station, so cops were able to get to the scene almost immediately.

How close a call was it? Check out the police body cam footage:

Foothill Division Officers displayed heroism and quick action by saving the life of a pilot who made an emergency landing on the railroad tracks at San Fernando Rd. and Osborne St., just before an oncoming train collided with the aircraft. pic.twitter.com/DDxtGGIIMo

If they didn’t put a big bow on Law Enforcement Appreciation Day, nothing will.

As for the bloodied and dazed pilot, he’s expected to make a full recovery. Praise God.

One question, though: If they had enough time to get cops out there and yellow tape, how come they didn’t have enough time to tell the train to stop?

You want some more uplifting stories? Billy Hallowell has put together “6 Stories That Will Renew Your Faith and Hope.” Thanks, Billy!

Got Any New “Conspiracy Theories”? Seems The Old Ones Are All True Now

Just this weekend, the CDC copped to three major truths about COVID, The Federalist notes. Truths that when shared last year or even in recent months would have landed you in Twitter jail. Or accused of wanting to kill Granny.

COVID narratives that countered science, history and common sense are finally being abandoned after two years. But at what cost in terms of lives, health, the economy, the education system, politics and trust in our public health officials?

Now if only the liberals on the Supreme Court and running cities and statehouses would get the memo.

Well, we can finally say something “positive” about AOC. Rep. Alexandria Ocasio-Cortez has tested positive for COVID days after her happy jaunt to Miami.

Her spokesperson says AOC is “experiencing symptoms and recovering at home.” We wish her a speedy recovery. And no, it’s not because we want to date her.

Maya Angelou Becomes the First Black Woman on a US Quarter

The late poet Maya Angelou is the first Black woman to appear on the U.S. quarter. The U.S. Mint has begun shipping the first coins of its five year “American Women Quarters” Program. For the next five years, the mint will release five new coins featuring prominent women from our history. Angelou, author of the classic “I Know Why the Caged Bird Sings” is first up.

Well, isn’t this special. Kamala Harris’ new Communications Director Jamal Simmons has been tweeting for years that George. W. Bush “stole” the 2000 election from Al Gore, that Gore-Lieberman “didn’t lose”, and that Bush was “illegitimate.”  We’re not talking a bummed out campaign worker in the aftermath of that controversial election. We’d get that. However, Simmons was tweeting about it from 2012 to 2021. Since questioning controversial elections is now “insurrection,” according to Harris, does anyone want to ask why Harris is hiring an insurrectionist?

Or should we just worry about praying for Simmons since he’s just signed on for the toughest job on the planet: Making Harris come off well in public.

In my new article “J6 Hysteria: Fanning the Flames to Stop Trump and Other Numbers,” I explain why the Democrats keep pushing this “insurrection” garbage. It’s a tactic. They can’t win on the issues, so instead they are trying to ban Trump-supporting GOP congressmen from running. Section Three of the 14h Amendment bars from office anyone who has “engaged in insurrection or rebellion.”

The strategy is the brain-child of Chief Election Fixer Marc Elias.

No sooner did the article go up than news broke that a group of “North Carolina voters” — translation: Elias recruits — have filed to disqualify freshman Congressman Madison Cawthorn from running for re-election because of his involvement in the Capitol “insurrection.” What did Cawthorn do? He gave a speech at the rally in support of Trump. Yeah. A speech. This act, these enemies of free speech claim, provides “reasonable suspicion or belief” that he helped facilitate the insurrection.

Of course, banning political opponents is not only anti-democratic, it screams desperation. The party sees the writing on the wall. Yesterday, veteran Colorado Rep. Ed Perlmutter announced he’s not running for re-election. Perlmutter is the 26th Democrat to quit while the quitting’s good.

For almost a year after its post-election reshuffle that exiled Martha McCallum to mid-afternoon, Fox News had been rotating guest hosts in its 7 p.m. prime time slot. Finally, they’ve settled on a permanent host: One Jesse Watters. My only question is why did it take so long? Watters is already co-host of The Five and has his own Watter’s World on Saturdays.

Watters is coming full circle. He first made his bones at Fox News as a producer and correspondent for Bill O’Reilly’s O’Reilly Report in that very time slot. Jesse Watters Prime Time premieres January 24.

Any suggestions on who should get Jesse’s weekend slot? (One idea: Have Fox Business News’ brilliant and hysterical Kennedy take over the slot, develop a strong, fun show. Then in a couple months move her to weeknights right after Gutfeld! and make Shannon Bream host of Fox News Sunday. Got a better idea?)

Gotta love this one from Tom Gilson: “Hogwarts and Hogwash: Belief in Socialism is Belief in Magic”