My sister was inside the Pentagon when it was struck. I asked her about her memories of that day. 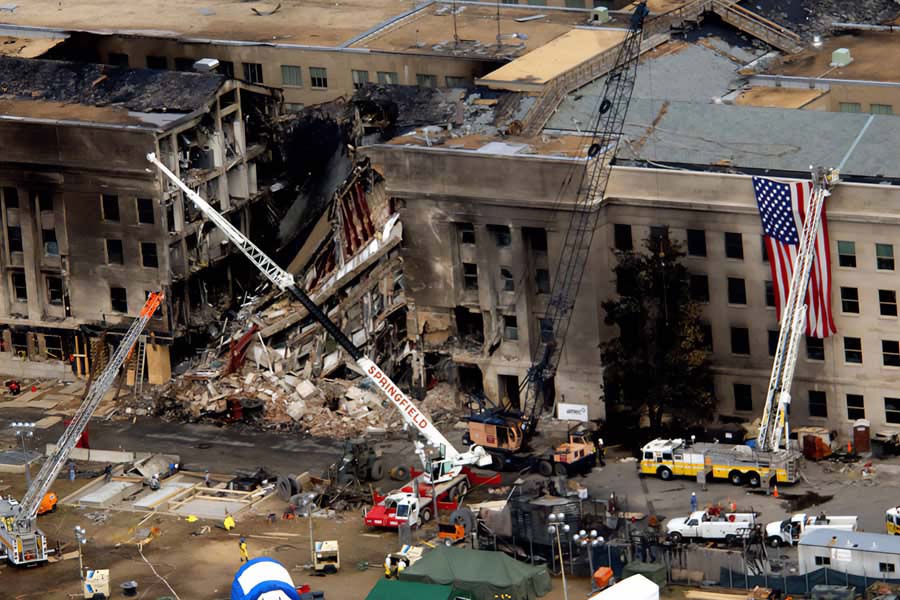 On September 11, 2001, four American planes were hijacked by radical Islamists. At 9:31 a.m. one of those planes, American Airlines Flight 77, slammed into the Pentagon. 184 people died. My sister Dodie — at the time an intelligence operations program manager for the Air Force — was there. I got a chance to interview her about her memories of that horrible day. This is the first of two parts.

Al: In the spring and summer of 2001, the Intelligence Community (IC) was convinced a big attack from al-Qaeda was imminent, but they couldn’t put the pieces together. In fact, you missed my wedding because of high level meetings in the race to uncover the plot.

Dodie: Yes, IC knew something was brewing. The “Wall” so many people talked about between the IC and FBI was real. The IC community was not authorized to share information with the FBI. A Clinton administration rule that made absolutely no sense to us.

Al: Even though Flight 77 diverted to the Pentagon after being unable to spot the White House, you believe military personnel were under surveillance before 9/11.

Dodie: I saw trouble with my own eyes when we were temporarily located in a high rise in Falls Church, Virginia, pre-Sep 2001. It was later reported some of the hijackers/terrorists were linked to Falls Church.

The section I was working in at the time in the Pentagon was being renovated, so we had a floor secured so that some of the USAF Intel could reside there for a while. Both military and civilian worked in these offices and many of us would leave the building either by foot or car to eat lunch at local places. Or we’d leave via car to go back to the Pentagon for meetings.

It was obvious the military was being surveilled. When challenged — people having their pictures taken, being followed, etc. — those doing the surveilling would leave in a hurry.

I sent a note up the chain requesting that USAF allow the military members in our building wear civilian clothes. My thought was, “Perhaps they would think the military organizations left the bldg.” Whenever I asked for a status, I got: “We’re working it.”  Standard for “Don’t bother me; I’m busy.”

And so we come to Tuesday, September 11th.  By then, you’ve moved back to the Pentagon. Put us in your office that morning.

I was working in my office, Fourth Floor, A Ring. I went next door to my boss’ office for some reason, the  head of USAF Intelligence.  The “middle office” where the Executive Officers sat always had a news channel broadcasting on a wall-mounted TV. They alerted me to an “accident” of the first plane going into the Twin Towers. While watching, we saw the second go in. My first words were: “This isn’t an accident.”

I went back to my office for an unrelated, pre-planned meeting with a co-worker from a different organization. The original plan was to meet in his office, first floor E Ring. Early that morning, he called to tell me he would come up to my office since he had to see his boss located on the fourth floor.

Prior to us being hit, my friend at Wright-Patterson AFB called me. Sherry was worried about me, and I made a smart-aleck comment that “No one will come after us; we’re military and the media doesn’t care if we get hit.”  She responded: “Smart-aleck. I’ll put it on your gravestone if something happens to you.”  Just as I hung up the phone, Boom! And the office jerked.

I looked at my co-worker, and said “Whoa, what was that?” He said, “Someone just probably dropped something heavy in the hall.”  I said, “Nope. We got hit,” and left our SCIF (Sensitive Compartmented Information Facility) to find a window. I saw the smoke and ran back to evacuate our small SCIF — only four of us. We had Emergency Procedures to follow, so after everyone left, I double-checked to make sure classified information was locked up in case personnel without proper clearances had to enter, then left.

You waited a few years to tell me, but why was it a big deal that your colleague was meeting with you in your office area rather than his?

His conference room took a direct hit from the plane. Since we would have been in his conference room, I always say, “Dad was looking out for me,” since his grave in Arlington National Cemetery overlooks the area where the plane went in. My other co-workers who were in their office were hurt, but able to get out. One clearly remembers crawling over a super-hot wheel well.

What was the scene at the Pentagon after the attack?

The scene inside the Pentagon was amazingly calm. By the time I got down to the concourse area to get outside, it was very crowded, with people packed. There was no panic. The only problem was when announcements came over the audio system, people would stop walking to listen. I wound up yelling, “Keep moving, folks, there’s a lot of folks behind you that need to leave the building.”

I was so proud of my Pentagon co-workers. Once outside, many headed over to the area where we saw the fires to see if we could help. By that time, the place was crawling with people who had on “FBI” jackets. It was like they came out of the ground, really weird. Obviously, they wouldn’t let us near the site; we’d just get in the way of the professionals, I guess.

You and the other Pentagon workers were forced to evacuate the area, forced to walk down Route 1 away from D.C. Then there was the problem with your shoes.

Geez. The Shoes. Usually, I wore flats to work because running around the Pentagon on the hard concrete floors is a killer. For some reason, I wore heels. Since I rarely wore heels, I didn’t have other shoes available to change into. Metro shut down, and all the stores shut down. So, I and thousands of others, started the long walks. I headed down Rte 1 in the direction of my car about 7 miles.

I remember mom and (our sister) Julie had trouble reaching you.

Because I worked in a SCIF, I wasn’t able to have my phone with me. It was in the car. Those that had phones couldn’t get through to anyone because of system overload. When I found a pay phone I was able to call Mom and tell her and Julie to stay put. (Husband) Mike had left his office. He figured he better go to Mom’s and await word. When he heard I was OK, he went to the Metro stop to wait for me figuring I’d wind up there eventually.

That Exodus of Pentagon and Federal workers was something. The Pentagon is the largest office building in the world, and all the federal government workers were also sent walking out of fears of another plane hitting the city.

It was like the night of the living dead. People just quietly walking. There were cars bumper to bumper on Rte 1, not moving. People were offering us strangers rides. I laughed, “I think I’ll get there faster than you.”

I wasn’t in the mood to just sit in a car. I needed action of some sort. By this time, I was in bare feet, my legs/feet were killing me from the stupid heels. No stores were open to buy sneakers. We found an open McDonald’s who offered free drinks and seats to rest.

What emotions were you feeling at that point?

I was super pissed off.  I was just itching for a fight. A bunch of us were crossing a street and some woman must have gotten tired of trying to get onto Rte 1, so she tried to intimidate us with her car and push through the crowd.  I stopped right in front of her against her bumper and stared. I guess she figured it wasn’t worth taking on the crazy woman. Ticked me off even more.

At this point I should mention my sister is not even five feet tall. Not exactly a physically imposing figure, and usually the sweetest person on the planet. But she does have that Italian Pellegrino and Perrotta blood. The woman in the car was very wise to back off.

On September 13, you did something I still find amazing. You got in your car, and drove back to work at the Pentagon … with the building still on fire.

I got there bright and early because I knew we’d go into wartime mode. My program was not immediately affected — that came later — but I knew we’d go to “all hands on deck” to review Intel and help with analyses. People were getting ready to be deployed, so those of us staying back had to be ready to take on whatever leadership needed.

Building had a lot of smoke in the hallways for quite a while. The stench was awful. Luckily, the fuel smell was strong enough to almost overpower burned human flesh and other odors. 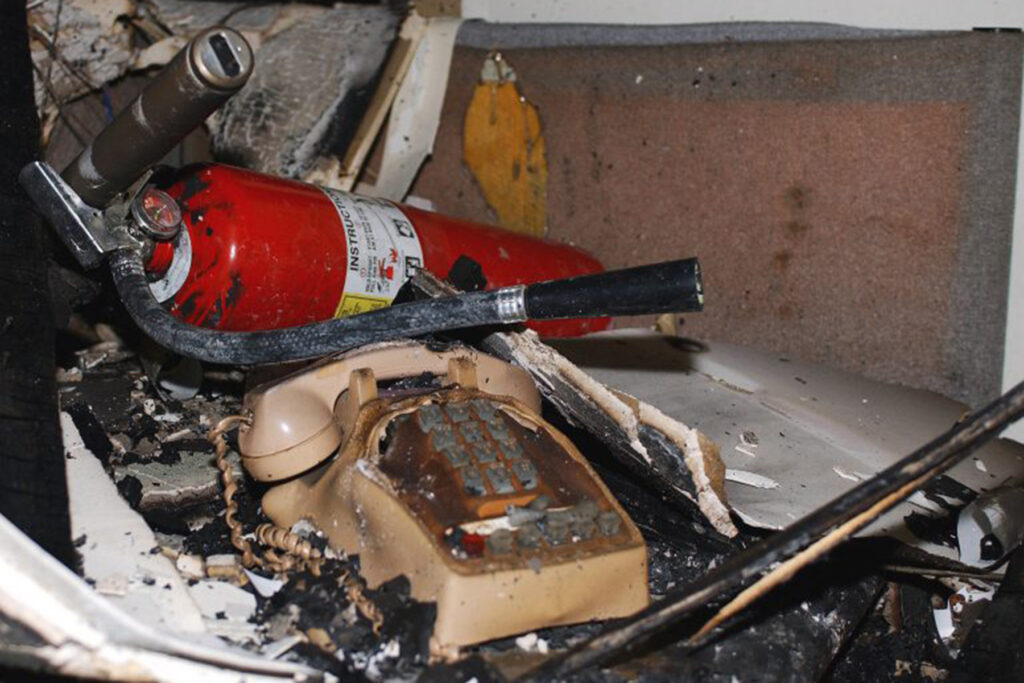 Burned and melted items sit atop an office desk inside the fifth floor of the Pentagon following terrorist attacks on Sept. 11, 2001. (Photo by Air Force Staff Sgt. Larry A. Simmons)

The hardest part was reading the Intel every morning. My alert level on Metro was at peak level every day. I felt like an Air Marshal on the lookout for months.

I was told some folks in other parts of the building would panic if they heard a plane fly over, once Reagan National re-opened. The Surgeon General sent folks around every week to check on us, but oddly we were all fine. No one I worked with was interested in psychological “help.” I think the attitude was much different than the New York people because we felt we had some amount of control — we could go kick ass.

In part two of our interview, we discuss her feelings on the 20th anniversary of the 9/11 terrorist attack. And how it feels as a survivor of that attack and a woman who worked her entire professional life for the U.S. military to watch the U.S. government hand Afghanistan back to the Taliban.