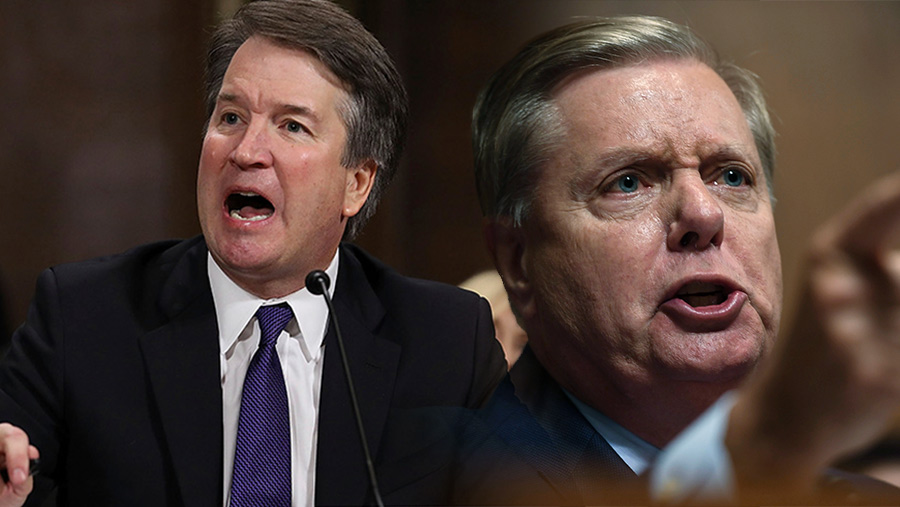 Like a drunk who sobers up long enough to quote some ancient poem or rattle off an arcane fact, the Republicans had a moment of clarity during Kavanaugh’s confirmation hearings. Then, they immediately sank back down into their former stupor.

They — and we — need to remember their winning tactic if we ever want to succeed again.

‘Credible’ is the New ‘Stunning and Brave’

We also need to remember what they did wrong: The first half of the Kavanaugh hearings was a political disaster.

Senate Republicans turned over their time to attorney Rachel Mitchell. The Republican leadership planned to avoid confronting the “courageous” witness at all costs (not even to point out that she repeatedly lied to their committee). Mitchell would seem sympathetic, then shred Ford’s baseless accusations in her report. Which she did.

Graham did what no other Republican had been willing to do: He took his own side.

The problem is, everyone sees the hearing. Nobody reads the report. And no one believes the report. The media promptly trashed Mitchell’s analysis.

You can’t let images of a vulnerable-looking accuser run live, get rebroadcast for days, then counter it with a white paper.

All that morning, the Democrats had the battlefield to themselves. Then, in the second half of the hearing, Brett Kavanaugh brought the first moment of clarity: He stood up for himself.

In his opening statement, Kavanaugh came loaded for bear — or donkey. “This confirmation process has become a national disgrace,” he said — and he only wound up from there.

“You have replaced advise and consent with search and destroy,” he said.

He hardly held back tears talking about how “my family and my name have been totally and permanently destroyed.”

Then he looked his bullies in the eye and let them know they had met their match. “You’ll never get me to quit. Never,” he said firmly.

That gave the GOP what it needed: courage to speak.

The morning’s high point came, improbably, from Lindsey Graham, who skewered those who condoned such character assassination.

Lindsey Graham did what no other Republican had been willing to do: He took his own side.

“If you legitimize this by voting no, then you’re setting up the destruction of all future nominees,” he said, looking directly at Jeff Flake. “You’re legitimizing the politics of destruction.”

It’s not just that Graham got mad. Republican senators felt miffed that their colleagues broke the rules of Senate comity. But the Democrats always do — and they win, while the Republicans cry into their chardonnay over their precious “process.”

Graham did what no other Republican had been willing to do: He took his own side. He tore off the fig-leaf of bipartisanship and exposed the Democrats as the bloodthirsty, power-hungry bullies they are.

If Chuck Grassley had held the committee vote at that moment, Kavanaugh would have been voted out of committee. The moral weight was too heavy to let Jeff flake-out.

But instead, he let the hearing go on. And on. That bought enough time for two left-wing activists to scream at Flake on CNN. And for Sen. Chris Coons to get ahold of him and talk about collegiality, and “respect,” and honor for the “process.” (There’s that word again.)

But the ludicrous left has become more determined, as well. They aim to nullify or destroy every part of Donald Trump’s presidency. Even after the confirmation, Congressman Jerry Nadler has threatened to launch his own probe of “credible allegations.” If the Democrats win the midterms, look for Nadler to announce, Mel Brooks-style, “Now begins the Inquisition!”

Flake’s “yea” vote now came with a condition: a week long FBI investigation. President Trump knew he had to go along with it, since Flake also spoke for RINOs Susan Collins and Lisa Murkowski. And without them, Kavanaugh would go down in flames.

So, Grassley and Flake botched Kavanaugh and Graham’s sure victory.

The Democrats hoped the FBI would hand Kavanaugh’s file to some budding Peter Strzok. Or more women would vaguely describe memories under a therapist’s guidance. Or some grifter would tell agents that he saw Kavanaugh commit cannibalism in the dorm of Delta Kappa Epsilon.

But mostly they hoped the investigation would hit the snooze button on judicial activism through the midterms.

So, after begging for “a one-week pause,” they groused that one week wasn’t long enough.

But the ludicrous left has become more determined, as well. They aim to nullify or destroy every part of Donald Trump’s presidency.

Even after the confirmation, Congressman Jerry Nadler has threatened to launch his own probe of “credible allegations.”

If the Democrats win the midterms, look for Nadler to announce, Mel Brooks-style, “Now begins the Inquisition!” Then stay tuned to C-SPAN for “perjury” hearings over slang terms for drinking games and fart jokes.

Win or lose this November, Republicans have to have the grit and stamina they showed during parts of this confirmation.

From Losers to Winners

One ray of light shined through this hearing: The Stupid Party learned how to fight smart.

With less than two years of Donald Trump at the helm, the GOP has transitioned. It’s not yet a Smart Party, but at least now it’s a trans-Smart Party. The Republican Party has transformed from a RINO Party into a Trump Party. From a defensive party into a fighting party. And, most importantly, from a losing party into a winning party.

At least for one bright, shining moment.

The Kavanaugh hearings should have taught us all: In order to win, you’ve got to get into the ring.

Patrick Howard Flynn is a conservative columnist and journalist.