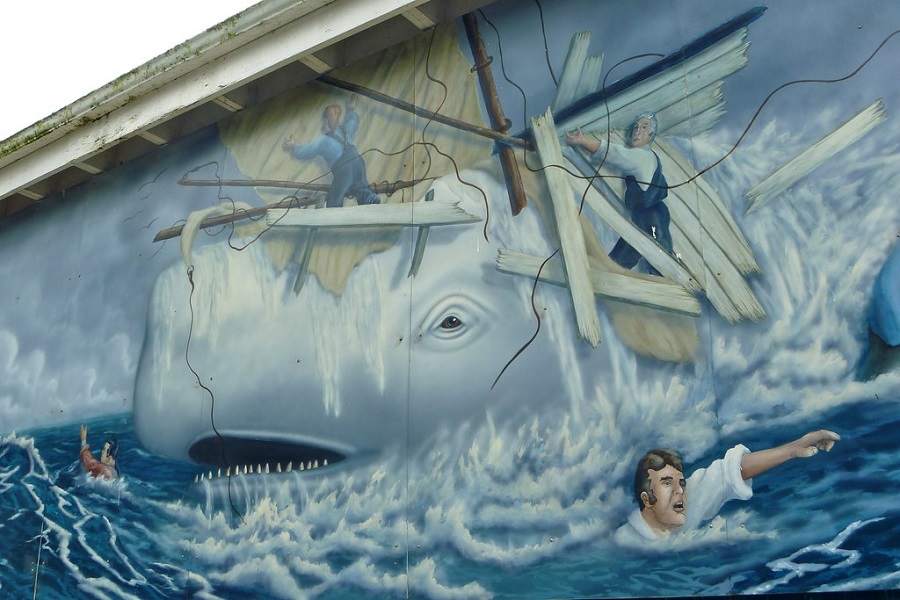 “Oh, Starbuck,” Captain Ahab lamented to his first mate near the end of Herman Melville’s Moby-Dick, “it is a mild, mild wind, and a mild looking sky. On such a day — very much such a sweetness as this — struck my first whale — a boy-harpooner of eighteen! Forty — forty — forty years ago! — ago! Forty years of continual whaling! forty years of privation, and peril, and storm-time! forty years on the pitiless sea! for forty years has Ahab forsaken the peaceful land, for forty years to make war on the horrors of the deep!”

And in all those forty years, Ahab did not add, he had been a success.

The Horrors of the Deep

A sperm whale, Melville makes clear in his novel, is huge, dangerous, and frightening, but the craft of humans conquers “the horrors of the deep.”

As a harpooner, mate, and now captain Ahab killed hundreds of whales, harvesting their oil, bones, and ivory. He sailed the oceans of the world with equally great skill and success.

Ahab conquered whales and the harsh realities of whaling life in all but one instance: Moby Dick, the white whale. And therein, of course, lies Melville’s tale.

The white whale accumulates meanings as the novel progresses. It is, as they say, complicated. Nonetheless at a minimum we can say that Moby Dick represents unconquered nature. It is unyielding reality and Ahab hates it with a monomaniacal passion.

His first encounter with Moby Dick resulted in a lost leg. For that insult, Ahab demands the whale’s life.

As his ship the Pequod sailed, she came upon others who barely escaped their encounters with the white whale. They warn Ahab away, but to no avail. Starbuck, sensing doom, begs, “Oh, my Captain! my Captain! noble soul! grand old heart, after all! why should any one give chase to that hated fish! Away with me! let us fly these deadly waters! let us home!”

Ahab’s own heart warns him as well: “What is it, what nameless, inscrutable, unearthly thing is it; what cozening, hidden lord and master, and cruel, remorseless emperor commands me; that against all natural lovings and longings, I so keep pushing, and crowding, and jamming myself on all the time; recklessly making me ready to do what in my own proper, natural heart, I durst not so much as dare?”

Yet Ahab must go on. He must kill the whale. The mysterious “horrors of the deep” must be conquered. Reality must submit to human ingenuity and skill.

A Much Older Tale

The story, of course, is far older than Moby-Dick. “Come,” said the people of Babel, “let us build ourselves a city, and a tower with its top in the heavens, and let us make a name for ourselves, lest we be scattered abroad upon the face of the whole earth” (Genesis 11:4).

As Leon Kass writes in The Beginning of Wisdom: Reading Genesis, “Babel, the universal city, is the fulfillment of a recurrent human dream, a dream of humankind united, living together in peace and freedom, no longer at the mercy of an inhospitable or hostile nature, and enjoying a life no longer solitary, poor, nasty, brutish and short.” It is the dream of all reality under human control.

Kass goes on, “From God’s point of view, the city of man is, in its deepest meaning, at best a form of idolatry and self-worship, and at worst a great threat to the earth.”

And like the hunt for the white whale, the tower was also a fool’s errand and a dangerous one at that.

It is also perennially popular and, it would seem, part of our human nature — our fallen human nature.

Thus while socialism destroyed the economies of countries like England and Israel, both of which recovered only by embracing the free market, the American left is lunging toward socialism to solve problems, happily ignoring life in Venezuela.

Gender is now about feelings rather than reality. How dare nature (or Nature’s God) create a binary system! And our fellow citizens seem to believe that defying reality is a duty.

Ripping a child from its mother’s womb, we’re told, has no long-term physical, spiritual, or psychological consequences. All is well. Except that the experience of too many women (and men) make it clear that it’s not.

Our politicians and some scientists claim that climate — a nearly infinitely complex and poorly understood system — is under human control. And, by golly, we must control it no matter the cost.

Reality must be conquered. The tower must be built. The white whale must be killed.

A Miller beer commercial from the 1980s asked, “Who says you can’t have it all?” to which columnist George Will replied, “Reality, that’s who.”