Mobs: ‘Forget the Diagnosis. On With the Amputation!’ 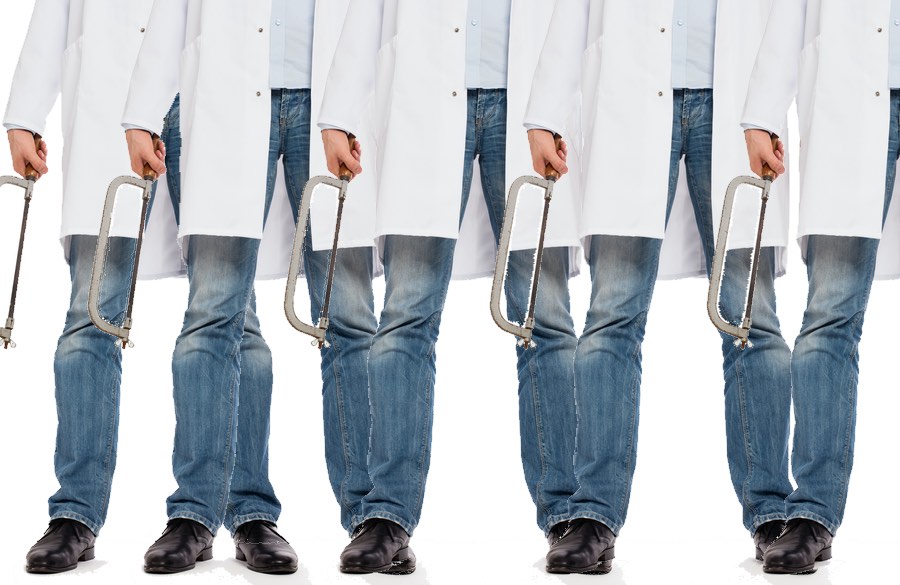 “No, not yet,” says the kindly physician. “It’s not terminal. But it’s bad. Real bad. Looks like we’ll have to amputate. Cut it right off. We’ve got to de-fund the police.”

That’s no joke. My family’s been there. My dad and my sister have both lost their right legs above the knee.

And now we’ve got activists and city councils planning major surgeries on their police departments. For some, defunding means retraining and restructuring. For others it means cutting it right off. Then there are those who are trying to claim a middle ground, kind of like, “Cut it off? Yes! But no! Not really.”

Here’s what I remember from my family’s three situations. Yes, three: A beagle of ours lost his right hind leg, too. He was hit by a car, so that was a quick choice between amputation or nothing. My dad and my sister’s cases, though, both had lengthy illnesses leading up to them, which makes them a better analogy  to our social situation.

And here’s what I know to be true about both their cases. These were very serious surgeries, with very serious consideration leading up to them. They didn’t have it done because they were uncomfortable. Both their surgeons were careful to prove they needed it.

Who Ran These Tests?

So where’s the proof we need drastic measures with our police forces?

We’ve got anecdotes. We’ve got impressions. That’s okay. There’s reality there, I’m persuaded, and we don’t need hard proof before we decide to do something about it. But what?

We don’t expect doctors to do multiple lab tests and imaging studies before they prescribe antibiotics for an earache. We’re more than happy to trust their clinical impressions. Major surgery is different, though. We need data. We need real evidence — evidence to support both the diagnosis and the treatment.

Anecdote-driven demagoguery is dangerous. Self-appointed mobs have a bad history behind them. Including knives.

Yet we’ve got all these people calling for police departments to be cut off — or at least radically irradiated, if you’ll let me push the analogy — based on mere impressions. Aren’t there tests we should run? Isn’t there some data we could check with first?

Seems like a fair question, but these would-be surgeons are hacking and sawing based on quick, anecdotal clinical impressions instead. They’ve already landed on the treatment. An accurate diagnosis might be inconvenient.

Which is why we’re not hearing a lot of discussion about the 2019 Michigan State University diagnostic study that shows absolutely no evidence of widespread police racism in their use of lethal force. Quite the opposite, in fact. The study found police had used lethal force proportionately more on whites than on blacks.

That’s inconvenient, when you’ve already got your diagnosis and you’re working out your treatment plan. It’s so inconvenient, Michigan State has forced its grad research director out of his position, just for putting the word out on it. The school has taken down it press release on the research, and the authors have been pressured to ask for the journal article’s retraction. (See the summary here, from a blogger I personally know to be reliable.)

[MSU] President Stanley released a statement on June 19 where he defended his decision to pressure Hsu to resign.

“I believe this is what is best for our university to continue our progress forward. The exchange of ideas is essential to higher education, and I fully support our faculty and their academic freedom to address the most difficult and controversial issues.”

So where’s the evidence we need to take drastic measures with our police forces?

Scientists and physicians both have a favorite saying: “Anecdotes aren’t data.” One cough doesn’t mean you’ve got COVID. And one police shooting doesn’t mean we’ve got a racially motivated police violence problem.

“But there’s been more than one!” you say. Of course there have. That’s still not science. It’s enough to form a clinical impression. Enough to prescribe an antibiotic. Not enough cry out, “Off with their legs!”

I’ve had years of serious foot problems myself. Once I visited a new doctor who look at my MRI and said, “I can’t tell what this scan is saying. I need to go in and find out. Let’s schedule an operation next week.”

I’d have run screaming from his office, if only I could have run. He was way too knife-happy. There’s no way I’d let a doctor do surgery based on such thin evidence.

The mobs are knife-happy. Thankfully that’s only a figure of speech — for now. Anecdote-driven demagoguery is dangerous, though. Self-appointed mobs have a bad history behind them. Including knives.