Fear of Sanders socialism — and a landslide Trump victory — overrides fears Joe has lost his fastball. 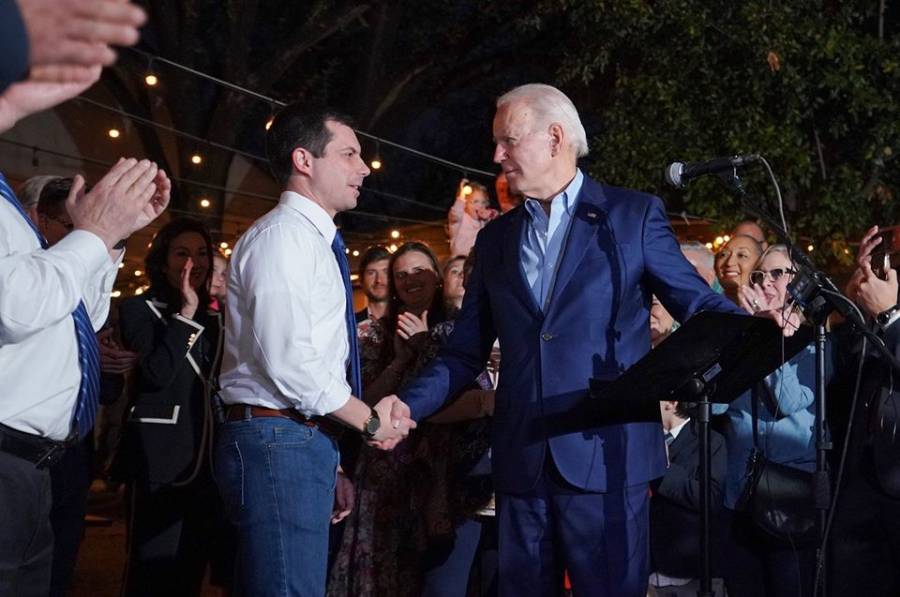 Joe Biden shakes hands with Pete Buttigieg at Texas rally on the eve of Super Tuesday. Biden would go on to win the Texas primary.

Uncle Joe Biden has pulled off one of the great political comebacks in history. And that’s no malarkey.

After being declared politically dead after a dismal fourth place finish in New Hampshire, Biden has come off the canvas with a stunning streak of wins on Super Tuesday over Bernie Sanders. He even won Texas, which polls had Bernie in a blowout just days ago. Even in the People’s Republic of California, Biden did well enough to secure a sizable chuck of delegates.

Biden won Super Tuesday. Or as he now calls it, “Super Thursday.” And he has a lot of people to thank.

Joe gets to thank Pete Buttigieg and Amy Klobuchar for pulling out at the last minute and throwing their support behind him.

He can thank Mike Bloomberg for proving himself a dud candidate.

He can thank Elizabeth Warren for destroying Bloomberg in his first debate.

The comeback candidate can thank the mainstream media for launching an assault on Sanders and playing down Biden’s disturbing mental miscues.

Certainly Joe has to thank his wife, Jill. If you missed it, Dr. Biden fiercely blocked two protesters who charged at Joe during his speech last night in Los Angeles. She may not become first lady, but she may well be a first round pick in the NFL Draft.

And of course, Biden must thank Democratic voters, especially those who came his way the past few days.

Most of all, Biden must remember to thank Fidel Castro.

After all, Sanders embrace of Castro last week provided a firm reminder he’s no Democratic Socialist like the Swedes or Danes, but a hard-core Soviet-style communist with a fondness for anti-American revolutionaries. Parading Ilhan Omar at his Minnesota rally the other day helped prove the point.

One would like to think Tuesday’s results are a sign Democrats are rejecting socialism. However, one suspects the true reason is Democrats understand a socialist nominee would guarantee disaster in November. Priority number one, even over preserving our system of government, is getting rid of Donald Trump.

And if the best option is a guy who can’t quote the Declaration without getting hopelessly lost, so be it. Besides, at the end of the day, who doesn’t like Joe Biden?

Bloomberg Bails, Will Warren Be Next?

Joe Biden woke up to more good news this morning. Mike Bloomberg has suspended his campaign and is joining the Biden Bandwagon. (And will be forking over the dough for the fuel.) Bloomberg blew $700 million of his own dollars on his campaign. What’s he got to show for it? A victory the American Samoa caucuses and the scars from his whipping by Elizabeth Warren.

As for Warren herself, after bombing in her home state of Massachusetts, she is facing pressure to quit as well. But will she? An aide told CBS News the senator is “talking to her team to assess the path forward.”

What’s Warren have to lose by staying in? Her competition is a 78-year-old socialist who just had a heart attack and a 77-year-old who’s not firing on all cylinders. She’s one health scare away from being the viable alternative to either. She’s progressive enough to pick up much of Bernie’s mantle. She sounds moderate enough (by Democrat standards) not to scare the daylights out of the DNC.

So why not stay in the race? Knock both Sanders and Biden around, pick up some delegates, go into a brokered convention as the perfect compromise choice.

But will she do it? We’ll see.

Regardless, for all practical purposes, it’s Bernie Sanders vs. Joe Biden.

As of this morning, Joe Biden has earned 509 delegates and Bernie Sanders has 458.  You need 1991 delegates out of the total 3,979 to win the Democratic nomination. If neither Bernie nor Joe hits the magic number before the August convention, Biden has an ace up his sleeve: the so-called Super Delegates.

These are unpledged delegates who are free to support any candidate, after the 1st ballot at the convention. Super Delegates consist of DNC members, members of congress, governors and distinguished party leaders. An estimated 764 total. You can bet your sweet bippy these Super Delegates will pick Biden over Sanders.

So if you’re Bernie Sanders, you cannot let it get to a brokered convention. You can’t whine about the DNC making deals, and the “establishment” trying to rob you of the title. You lose if you let it get to the judge’s cards. You’ve got to score the knock-out.

Unfortunately for Uncle Joe, this time when a radical charges at him, Jill Biden won’t be able to protect him.

Democrats are in for an ugly spring and summer.

Joe Biden Scores Big in South Carolina … But What About Super Tuesday?