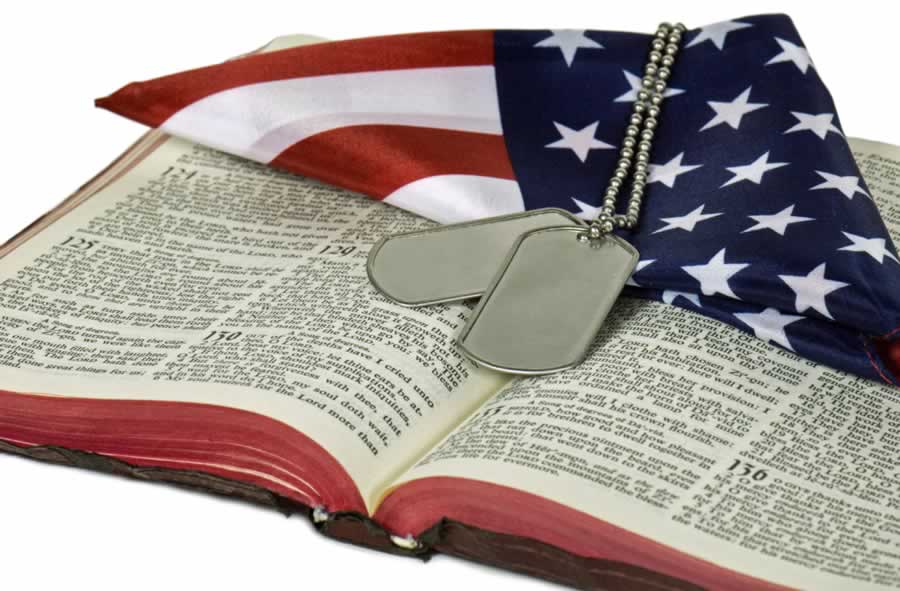 The U.S. military’s highest court will decide whether a Marine with a history of insubordination was denied her religious liberty for being forced to remove a Bible verse from her work space — or whether a lower court got it right when it ruled the removal was part of maintaining a militarily efficient work atmosphere.

Lance Corporal Monifa Sterling’s case has garnered support from a coalition of former military chaplains and others. She has been represented in court by religious liberty legal group First Liberty Institute and former U.S. Solicitor General Paul Clement.

However, a spokesperson for a group focused on separating religion from the military told The Stream that Sterling was treated fairly by her superiors.

Sterling’s case stems from when she placed a paraphrased version of Isaiah 54:17 on her desk in a display designed to imitate the Holy Trinity. The phrase was “No weapon formed against me shall prosper,” and according to an amicus brief filed by the Becket Fund for Religious Liberty backing Sterling, it was largely visible solely by her, though an appeals court noted the statements could be viewed regularly by people approaching Sterling’s work area.

The symbols were too much for one of Sterling’s superiors, according to First Liberty’s background on the case. She was ordered to remove them because “I don’t like the tone.” When Sterling refused, they were torn down without notice or permission — and she replaced them.

Shortly after this, Sterling was court-martialed over several incidents, including the Bible verse altercation. The other incidents included refusing an order from an officer for an assignment to hand passes to family members visiting Marines returning from deployment, not showing up for duty when the family members were visiting, and lying about why she didn’t want to wear the required uniform in a separate incident.

She was “convicted, given a bad conduct discharge, and reduced to the military’s lowest rank,” according to First Liberty. Her appeal was rejected by the Navy-Marine Corps Court of Criminal Appeals in part because the court ruled that the 1993 Religious Freedom Restoration Act (RFRA) and “the definition of a ‘religious exercise'” do not protect “personal beliefs, grounded solely upon subjective ideas about religious practices” as part of “religious exercise” that is not “part of a system of religious belief.”

RFRA is a law signed by then-President Bill Clinton that requires government to take the least intrusive method possible to accomplish government goals if religious liberty restrictions are an issue.

“The charges against Sterling resulted from several separate, unrelated incidents over the course of five months,” wrote Military Religious Freedom Foundation Senior Research Director Chris Rodda, whose group opposes Sterling’s case, at Huffington Post. “These incidents included failing to go to her appointed place of duty, disrespecting a commissioned officer, and disobeying direct orders from her superiors to wear the proper uniform. These incidents had nothing to do with religion or religious freedom.”

After Wednesday’s arguments, First Liberty’s Mike Berry said in a statement that “This case will determine whether our service members’ constitutional right to practice their faith will be protected by the law as they serve in the Armed Forces.”

But while Becket, 43 members of Congress and nine retired generals are backing Sterling, Rodda says Sterling’s behavior was neither constitutionally protected nor separate from a habit of insubordination.

Were the Verses Protected Speech Under RFRA?

In its ruling, the appeals court found that the Bible quotes were removed in context to the larger context of Sterling’s relationship with her superiors.

“While locked in an antagonistic relationship with her superiors — a relationship surely visible to other Marines in the unit — placing visual reminders at her shared workspace that “no weapon formed against me shall prosper” could certainly undercut good order and discipline,” said the court. “When considered in context, we find that the verbiage in these signs could be interpreted as combative and agree with the military judge that the signs placement in the shared workspace could therefore ‘easily be seen as contrary to good order and discipline.'”

The appeals court also noted that Sterling “never told her SSgt that the signs had a religious connotation and never requested any religious accommodation to enable her to display the signs. Instead, the record supports the conclusion that the appellant was simply placing what she believed to be personal reminders that those she considered adversaries could not harm her. Such action does not trigger the RFRA.”

According to the appeals court, Sterling “testified that the three signs represented the trinity and were a ‘personal … mental reminder to me when I come to work, okay. You don’t know why these people are picking on you.”

Rodda told The Stream that “the Bible verse issue was only one of the charges against Sterling for which she was found guilty, and that it wasn’t even the most serious of the charges against her. … even without that one issue she still would have been court-martialed for the other more serious charges and would presumably received the same sentence.

Becket Fund counsel Daniel Blomberg says RFRA clearly protects Sterling. “RFRA states that the government — including the military — can place a substantial burden on a person’s religious exercise only if the government has no other way to protect a very, very important interest. Here, Lance Corporal Sterling exercised her religion by putting a few small Bible verses in her personal workspace, and the military substantially burdened that exercise by court-martialing her for declining to take down the verses. And the military clearly doesn’t have a compelling interest in making her take down those signs since, for instance, it allowed other nearby Marines to put up personal signs in their workspace.”

Rodda said the different standards make sense. “You can’t apply the same standards to all personal symbols and statements because military regulations do not apply to all personal symbols and statements. There is no military regulation that would prohibit, for example, someone putting up a sign that says they like dogs in preference to cats. There are, however, regulations prohibiting the endorsement or promotion of certain specific things, to include not just a religious preference but also a political or any other idealogical preference.”

Berry says his group’s fight for the Bible verses is separate from the rest of the charges of which Sterling was found guilty. “Our primary concern is to ensure that RFRA is applied fully to protect the religious freedom of our service members. Because RFRA was only invoked for the Bible verses, that is all that we are appealing,” he told The Stream.

But Berry, who is First Liberty’s Director of Military Affairs and Senior Counsel, disputed Rodda’s interpretation. “LCpl Sterling’s commanding officer and the military trial judge clearly knew that the Bible verse she posted was religious,” he told The Stream. “Their actions unconstitutionally restricted LCpl Sterling’s ability to exercise her religion as protected by federal law. Regardless of any other circumstances, that should never happen to a service member. No member of our military should be court-martialed for posting a Bible verse in her workspace.”

Rodda cited the 1974 U.S. Supreme Court case  Parker v. Levy to back her position, noting that restrictions on religious liberty were supported by the Court “in an opinion written by one of the most conservative and pro-religious expression justices in the history of the Court — Chief Justice William Rehnquist.”

The appeals court appeared to take the same position as Rodda, citing Parker in a footnote that noted “speech may ‘undermine the effectiveness of response to command.’ We apply these principles here and remain satisfied that the orders were lawful.”

However, Berry cited an amicus brief “filed in support of LCpl Sterling’s case by nine retired military generals who argued that the protection of religious freedom in the military increases effectiveness of response to command and enhances good order and discipline. We are defending this case to ensure that military religious freedom is protected, continuing to increase the effectiveness and military preparedness of our Armed Forces.”

Furthermore, Berry told The Washington Post that changes to how the Pentagon interprets religious liberty — made after Sterling’s Bible incident but before her conviction — mean that RFRA applies “the same standard … to federal employees applies to military employees as well.”

The lower court held that religious speech is inherently ‘divisive’ and can be preemptively censored by commanders. But that’s unconstitutional religious discrimination. It’s also backwards: from before the founding of our country, the military rightly has a long history of respecting authentic religious pluralism, which means service members’ religious speech is specially protected, not singled out for censorship.