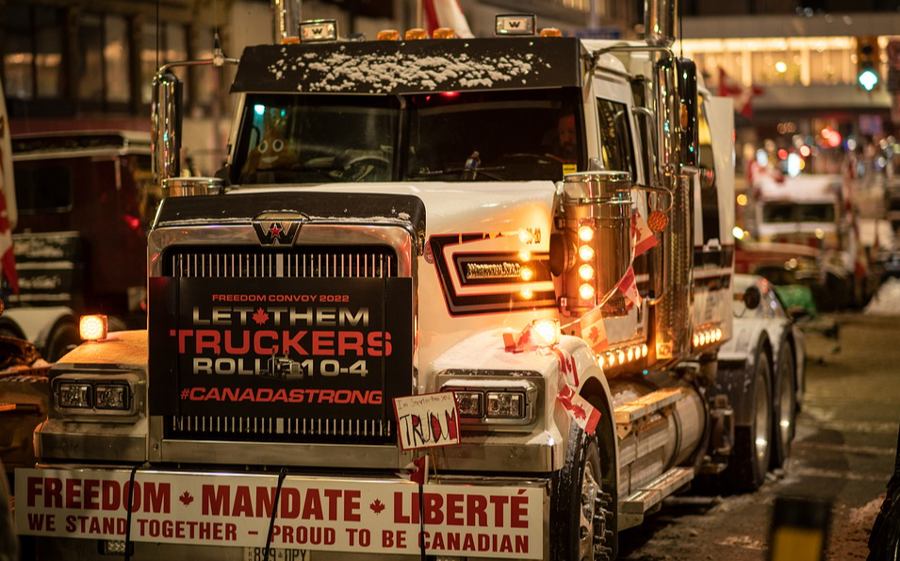 The once-free, English-speaking democracy of Canada is plummeting into thuggish tyranny. Mounted police trample unarmed peaceful protestors, on the orders of Fidel Castro’s “Mini-Me,” Justin Trudeau. North America’s Ceaușescu declared a state of emergency and suspended Canada’s Constitution. Translated into German, he invoked the Enabling Act to deal with the Reichstag Truckers.

So what should run through our heads? A number of things:

First we should pray for those brave Canadians fighting for their Magna Carta rights, against a regime run by a petty dictator who publicly admires Communist China. Here’s the prayer the great Archbishop Vigano is offering:

Thank God for Our Founding Fathers

Next let’s offer prayers of thanks that our ancestors revolted against Great Britain. We can see now in Canada, Australia, and New Zealand, that speaking English is no magic guarantee against Latin American-style fascism. There is something peculiar about the United States, which has so far held us back from the brink.

Let’s think about that “something.” What was it? How can we cling to it, restore it, and carry it into the future?

As I’ve argued here before, on a legal, practical level, that something is the Second Amendment to the U.S. Constitution. Speaking spiritually and psychologically, it’s the attitude toward citizenship that exists among citizens who retain the power to protect themselves. And in the worst extremity, to resist a tyrannical state.

Governments just don’t dare try things like locking a whole population up in their homes. Not if those homes hold military-style weapons, and citizens ready to use them in self-defense. It might sound ugly to say this. If David French hears it, he will probably burst into tears. But it’s a grim reality of our fallen condition that the only guarantee against deadly force is force.

Our founders knew that from grim experience. They’d heard countless sermons from Christian pulpits about the persecutions which Puritans and other dissenters had suffered at the hands of Stuart monarchs. They’d helped their neighbors defend their settlements against American Indians — who’d understandably fought to resist Colonial landgrabs. They’d seen that the very spark of the War of Independence was a struggle in New England over access to gunpowder.

That’s why the right of citizens to bear arms comparable to the military found unanimous support among the founders. As Stephen Halbrook documents, the debates over the ratification of the Bill of Rights saw repeated references by various founding fathers to “citizens militias” and “an armed citizenry” as the final guarantee of freedom. It took the COVID panic, which elites worldwide weaponized to bully and micromanage billions of people, to drive the point home again.

Notice that even in America, it was only in blue states — where the Second Amendment is effectively and wrongfully nullified — that suffocating constraints prevailed, and still prevail. That’s no coincidence. A populace that knows it is disarmed, helpless, and utterly dependent upon the police is much more … docile. Like a Petsmart full of lapdogs, instead of a wood full of wolves.

The Modern State, Red in Tooth and Claw

The problem with shrinking into a lapdog, of course, is that the world is still full of wolves. The modern, secular State is one enormous wolf, like the world-ending Fenrir from Norse mythology. His snout is spattered red with the blood of innocents — 170 million civilians murdered by their governments between 1914 and 1990. Those victims had one thing in common. They’d been disarmed by those governments first.

At this point I hear in my head a nasal, whiny voice. It’s the sound of the Servile Christian commentator, chiming in like Ned Flanders from The Simpsons. “Okely-dokely, but what about Romans: 13? It sounds to me like you’re callin’ on folks to act like a bunch of Zealots. And as Josephus noticed, it didn’t work out too well for them in AD 70 in Jerusalem!”

So let’s look at that passage. I will spend most of my columns this week examining how interpretations of this injunction by St. Paul have changed over the centuries. I ask you to read it slowly and reflectively, considering the implications of how you interpret it. If your reading of a Bible verse leads to outrageous consequences, which violate Natural Law or vitiate the Old Testament, or seem to condemn the behavior of many saints … then you’re reading it wrong.

A wrong reading of Romans 13 would imply that Holy Scripture condemned in advance:

Now the passage, from St. Paul addressing the church in Rome:

Let everyone be subject to the governing authorities, for there is no authority except that which God has established. The authorities that exist have been established by God. Consequently, whoever rebels against the authority is rebelling against what God has instituted, and those who do so will bring judgment on themselves. For rulers hold no terror for those who do right, but for those who do wrong. Do you want to be free from fear of the one in authority? Then do what is right and you will be commended. For the one in authority is God’s servant for your good. But if you do wrong, be afraid, for rulers do not bear the sword for no reason. They are God’s servants, agents of wrath to bring punishment on the wrongdoer. Therefore, it is necessary to submit to the authorities, not only because of possible punishment but also as a matter of conscience.

This is also why you pay taxes, for the authorities are God’s servants, who give their full time to governing. Give to everyone what you owe them: If you owe taxes, pay taxes; if revenue, then revenue; if respect, then respect; if honor, then honor.

Should We All Be “Good Germans”?

I have too much reverence for St. Paul’s human wisdom, beside the inspiration of Scripture, to take this sensible, prudent piece of advice and run with it over the Gadarene slope into the sea. That is what many Christians have done over the centuries — for instance by teaching that slavery was legal, and hence must be accepted. Or else by telling their congregations to be “good Germans” and obey the Nazis.

St. Paul was writing to a group of underground Christians living in an absolute monarchy dressed up like a republic. In the Rome of his day, wealthy senators could be falsely denounced for treason then summarily executed, with their estates seized for the State. He’d seen Jewish Zealots crucified for rebelling against the Romans. He knew that a third or more of that city’s population were slaves. Furthermore, Paul was concerned to make clear to his readers that the Church was not a political movement seeking power. Instead, it was a family concerned with preaching the Gospel and offering sacraments, such as Baptism.

Paul did wish to rebuke those tempted to anarchism or antinomianism, who thought that the Kingdom of Christ dethroned all earthly authority and laws. He taught that it is good for men to live in organized societies, where legitimate rulers protected order and punished crimes. Some Christian thinkers have argued that the Fall is the only reason men need to have governments. Thomas Aquinas disagreed, asserting that even unfallen men would still need a single authority to organize and rule them.

Many early Christians were tempted to absolute pacifism — rejection of military and even police use of force. Later on, many others would be drawn to political quietism — refusal to resist evil laws or unjust authorities.

In my next few columns I’ll explore the history which taught Christians the necessity, and the limits, of resistance to the government.