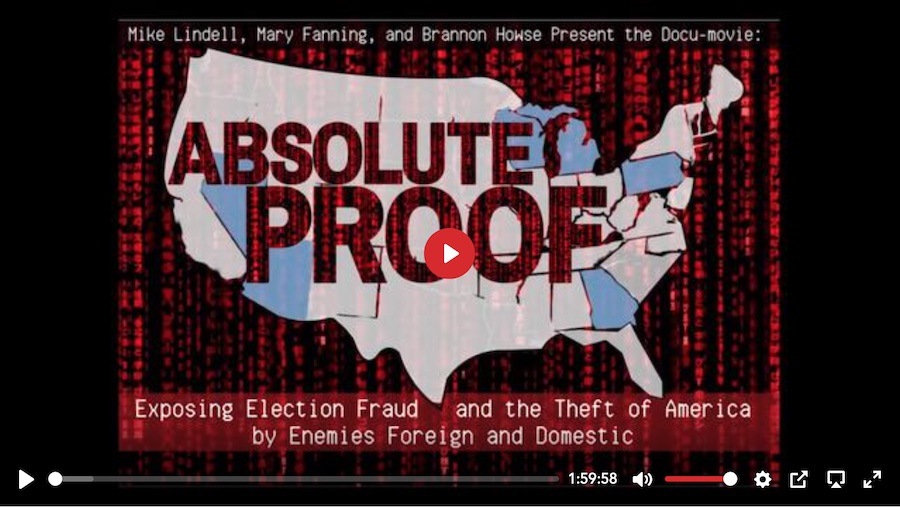 Mike Lindell, founder of My Pillow, is a brave soul. He has questioned the results of the 2020 election, even when doing so costs him dearly. Lindell says the election was shifted from Trump to Biden.

Of course, now even Time magazine admits this in so many words. But it uses the brand new euphemism fortified to describe how rulers leveraged COVID-19, BLM, Antifa, and their own power to redefine the law on the fly to shift the election to Biden.

Time, in other words, celebrates a manipulated election. Mike Lindell denounces it. As a result, Time is celebrated. Lindell is canceled.

Lindell has been booted off social media, had stores dump his products (a noble sacrifice, given how well they sell), and all but called an enemy of the state.

This official opprobrium hasn’t stopped Lindell, who is clearly made of stern stuff. Indeed, it impelled him to make his claims more loudly. He’s now created the video documentary Absolute Proof: Exposing Election Fraud and the Theft of America by Enemies Foreign and Domestic. (Watch it here.)

Shy of the Limit

Given the over-the-top title, the film was bound to fall short. And I say this as somebody involved in Lindell’s side of the fight.

His “absolute” proof turns out to be amorphous, and somewhat mysterious. About that, more in a minute. Let’s first focus on the film’s strongest points.

Lindell says electronic voting machines (whoever thought that was a great idea?) “were used to steal our election by other countries, including China.” He says he has proof that the “machines broke, overwhelmed by too many Trump votes.”

He brings in various people to make the point. One is Colonel Phil Waldron, who echoes Lindell’s charge. “People inside our own DOJ were shutting down investigations” over the matter, he claims. This is believable and very likely true. The FBI did not, after all, do a great job investigating its own spying on Trump’s 2016 campaign.

Russ Ramsland, of Allied Security Operations Group, details how similar electronic fraud happened in 2018. He says his team saw “people getting into the system and changing votes … coming from remote locations.”

These weren’t Dominion machines, which were in wide use in 2020. Rather, they were from a company called Election Systems & Software. Ramsland says that when he made the vote-changing known to authorities they weren’t interested.

He says that, then as now, votes are “stored” on “overseas” servers, and that “27 states use” a similar system for “election night reporting, and those servers are overseas.”

Ramsland was involved in highlighting the Antrim County, Michigan vote shifting, the one instance that the press reluctantly admitted. Authorities say it was an honest mistake. Ramsland disagrees.

He also details the unusual numbers of votes going to adjudication, which is when an election official gets to decide what a ballot “really” says. “Eighty two-percent of the vote in Antrim” went to adjudication in this election, he notes. The normal total is less than one percent. That’s extremely fishy.

The documentary includes arguments and testimony from many others, including the bouncy Mellissa Carone, who became something of a celebrity in the Michigan Giuliani hearings.

Yet Lindell, like a good showman, waits until the end for his “100% proof we had the biggest cyber attack on this country.”

This is provided by Mary Fanning, who is billed as a “national intelligence researcher and author.”

As evidence, she shows a spreadsheet of purported hack attempts — some successful, some not — in which votes were stolen from Trump and given to Biden. “Over 66% of the intrusions in the election came from China,” she said.

Similar data, she says, was shown to James Comey “by a whistle-blower” in 2015. She doesn’t say what became of that revelation, who the whistle-blower was, or what Comey did with the information.

Funny thing is, she never says where her data came from, either, how it was gathered, or who gave it to her. Lindell never asks her. This is most odd, because Lindell has built his case on just this data.

If it’s real, it is, as Lindell claims, absolute proof the election was stolen by a network of hackers all around the globe in a massive, coordinated and almost flawless attack.

If Ifs and Buts Were Candy and Nuts

We don’t know. Still, one thing is certain. If it was known to be false, we’d never hear the end of it from our rulers’ paid propagandists. The closest they’ve come to disputing it is to say Fanning’s claims “were debunked.” But they never say how they were debunked. An ancient journalistic trick.

You can find similar datasets to Fanning’s online. Alas, these are also without provenance.

The only solid information on Fanning appears to be her own articles and videos, where she repeats her claims, but never provides any details.

As a result, Lindell’s Absolute Proof still needs, if not absolute proof, then at least independent evidence that what Fanning claims is true.