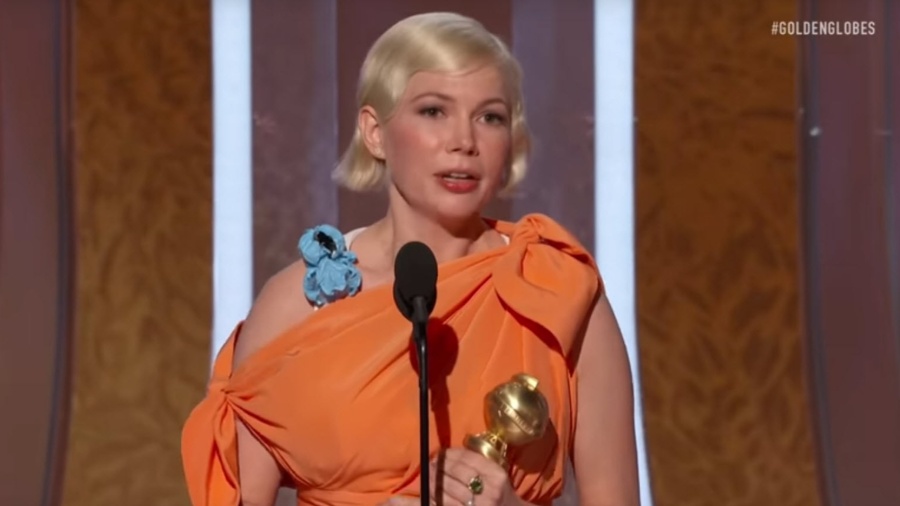 By Jennifer Hartline Published on January 9, 2020 •

By now you’ve probably read all about Michelle Williams’ Golden Globe acceptance speech in which she said her present success was only possible because, years ago, she was able to kill the child in her womb. She then urged all the women present and watching to “vote in your own interests,” meaning to vote in favor of abortion.

Perhaps you’ve also read some of the outstanding responses to Williams from some outstanding women. If you haven’t, go read Joy Pullman’s excellent piece at The Federalist, and Alexandra DeSanctis’s piece at The National Review.

I’m adding my two cents’ because there’s no such thing as too many women pushing back against the many lies of abortion: that it’s a reproductive “choice,” that women need it and their dreams can’t come true without it, that it’s health care, that it’s normal, that it’s no different than a root canal, etc. These lies serve the abortion industry and no one else. The truth is abortion is violence against the most vulnerable. Abortion exploits women. And women deserve better than abortion.

Michelle Williams doesn’t really believe she did a good thing in killing her baby years ago. She doesn’t actually, in her heart of hearts, think it was the right choice, that it was for the best, and life has turned out splendidly as a result. (Let us hope so, anyway. The alternative is too horrible.)

She made that speech because her avenging conscience demanded it, needing to be soothed once again, and she needed the public affirmation and applause to persuade herself, once again, that she’d done an empowering thing and all is well.

Abortion does not bring women freedom. Abortion leaves women in a perpetual war with themselves.

All is not well. Healthy women who are at peace with themselves do not “shout” their abortion. No happy, contented mother defends the act of killing her own baby as she cradles instead the golden statue she won. It is not courage or confidence that makes a woman publicly proclaim the rightness of her decision to have her child killed, but a conscience and a soul ill-at-ease, unable to be quieted. The baby may have disappeared from this world, but the reality of that life — now missing — remains.

Abortion does not bring women freedom. Abortion leaves women in a perpetual war with themselves. The fighting never ends until she stops living in the lie. There is no peace until there is truth. Only the truth sets anyone free.

A Speech on the Night of Epiphany

It’s ironic to me that Williams gave that speech on the night that many in Christendom celebrated the feast of the Epiphany of the Lord. The visitation of the Magi, the three Kings who followed the new star they’d seen at its rising so they might do homage to this newborn King. Men of wealth, means, and knowledge traveled for who knows how long in search of one greater than themselves, eager to acknowledge this baby’s honor and glory.

Many wise writers have commented on the significance of Christ’s coming as a newborn baby. He could have descended from Heaven a grown man, with great power, but He didn’t. The Father wanted Jesus to come to us in the sublimely ordinary, human way of birth from a mother’s womb, the child of a family. Warriors and rulers are fearsome and intimidating, but a baby? Babies are to be snuggled and kissed and protected and loved. Babies are meant to stir our deepest selves to tenderness and awe.

The Word became flesh and dwelt among us that we might not just hear Him but see and touch and marvel at Him as well. He came to us as a baby that we might reach out to hold Him, draw Him close and kiss Him. He showed His great love for us by being vulnerable to our love.

We Were Never Intended to Fear our Children

This is why the greatest destructive power Satan could ever devise for women, and for the human family, is to make the vulnerable and innocent child a threatening, greedy predator who must be destroyed for the sake of prosperity. The baby who would inspire a father and mother’s ferocious love and wonder is warped into a ruthless enemy. It’s kill or be killed. Very much like a ruthless maniac who lied to the Magi, and then slaughtered innocents out of fear for his own power.

Love is unwelcome in a society that clings to abortion. There is no honor or dignity in taking the life of your own child for your own sake. Michelle Williams’ speech should be a terrible epiphany to anyone who still has not recognized the brutal violence of abortion, its power to corrupt the hearts of women, and its appeal to every hustler who uses it to abuse women.

From the sound of the cheers in the audience, it seems that epiphany is yet to dawn. So like wicked King Herod, we cruelly shed innocent blood to protect “our own interests.”

No, Michelle. I don’t believe a word you said, and I pray you don’t either.