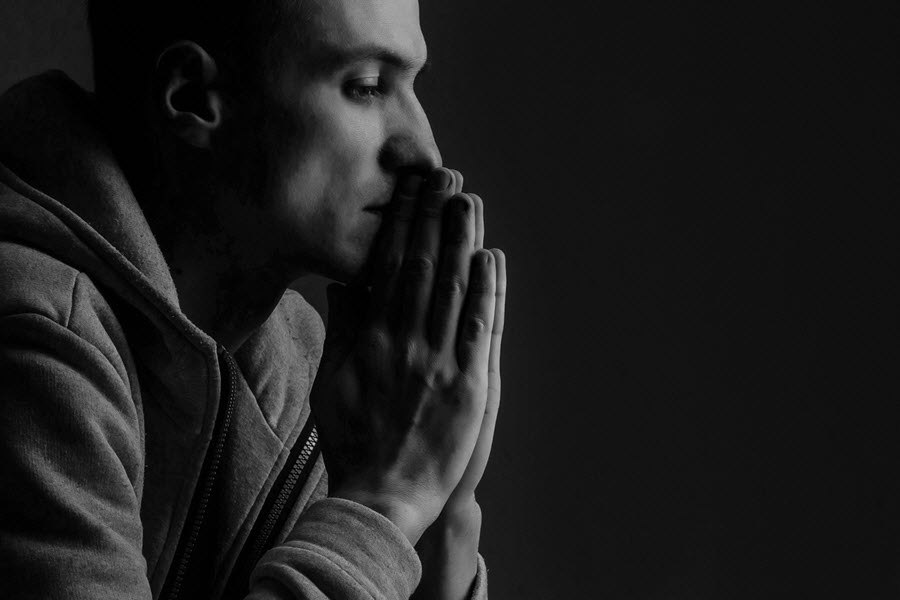 Masculinity is in the news again. The film Don’t Worry Darling caused a minor stir when it based a main character on Jordan Peterson and depicted men as wanting to talk women back to the 1950s. Tucker Carlson has an entire documentary called The End of Men, focusing on the massive drop in testosterone levels over the last several decades.

These cultural flare-ups about masculinity happen pretty frequently. But I’d like to propose something a little different: Men these days need to spend less time at work, and even less time with the wife and kids, and more time with God.

In a fascinating and well-researched 2017 article in 1843 magazine, Emily Bobrow reports that between 1977 and 2008, “the percentage of American fathers in dual-earner couples who suffered from work-family conflicts jumped from 35% to 60%.” During the same period the percentage of similarly afflicted mothers “grew only slightly, from 41% to 47%.”

Bobrow talks to Nathan, “a successful lawyer in Manhattan.” Divorced and in his late 40s, Nathan says his life is good and he is thriving in his career. But then, and “only with some hesitation” according to Borrow, he admits something he has never discussed before: “In the society that I live in, as a professional in New York City, I think it is easier being a woman than being a man.”

Nathan says he is an earner and “the person who kills bugs and fixes things around the house.” But “at the same time, I’m going to be responsive to feelings and helpful with cooking and the children and those kinds of things.” He concludes: “For the last 20-plus years I’ve been chained to a desk. I’m in a profession that I’m happy to be in, but if I were a 20-year-old and told I could do anything I wanted with my life, I’m not sure I’d be doing this.” Speaking of women who left professional careers after having children, Nathan says, “They weren’t perceived as failures. If anything, they were told ‘That’s so great, you’re choosing to be a mom, that’s the most important thing in the world.’ That is not an option open to men.”

Bobrow also talks to Eric, a corporate litigator at a law firm in Philadelphia. Eric says he works around 50 hours a week:

“The goal-posts keep moving,” he says with a sigh. With a mortgage, two young children in private school and a wife who decided to stay at home to raise them (her own salary as an attorney barely covered the cost of a nanny), he admits he feels a bit “stuck”. “No one tells you how these things work out in real life. Then you suddenly find yourself on the treadmill and you just gotta keep going.” In an ideal world he would split the parenting and housework evenly with his wife, he says, but his job makes this impossible. He recalls having to miss a recent parent-teacher conference because of a scheduled call with a client. “I didn’t even bother to say I had a conflict because I knew I would get a scowl or an eye roll, as if I was high-maintenance.”

Men might not be able to stay at home, but they also don’t need to obsessively revolve their lives around their children the way Nathan and others do.

Men With Lives of Their Own, Even Spiritual Lives

The fathers that were role models to me as a kid growing up in Maryland in the 1970s were strong, loving and good providers. Yet even after fatherhood they still had their own lives. They went to the bowling alley and to movies and plays. They read novels.

Many of them also had a life that involved a relationship with God, a relationship that was often so intimate that it was on a different track than work and home life. There were men’s organizations like the Knights of Columbus that would meet and do charity work. They provided men with the kind of companionship they would not get at work or at home. As men are increasingly drawn into the orbit of their marriage 24/7, it becomes harder and harder to cave out an individual spiritual space. And that, at the end of life, is going to be what matters.

More than thirty years ago, I stopped drinking. At the time I was fortunate enough to have a family friend who brought me to a club that met twice a week to support each other in sobriety and pray together. The group was all men. While in the beginning I felt a bit awkward, this group soon became an indispensable support and source of joy for me. I had never appreciated how powerful a group of men sitting together and reciting the Lord’s Prayer could be.

No Time to Breathe, Or Pray

Of course, it would great if the American workplace was more accommodating to daily prayer. The 1838 piece reveals:

High-earning professionals are expected to put in longer hours than ever before, toiling in offices long into the night. In 1979 16% of salaried American workers punched in at least 50 hours a week. By 2014 that number was 21%.

Research from Youngjoo Cha of Indiana University and Kim Weeden of Cornell found that since the 1990s, the workers who stay at their desks the longest are rewarded with the highest wages and the most promotions. Bobrow writes: “Previously, those who worked long hours tended to be low earners; now, the reverse is true. An average man in a typical full-time job made around $26 an hour in 2014; those working at least 50 hours a week earned nearly $33.”

Chained to a desk for sixty hours a week while also expecting to be a mom as well as a dad is a recipe for male burnout and frustration. Guys need more time for God.