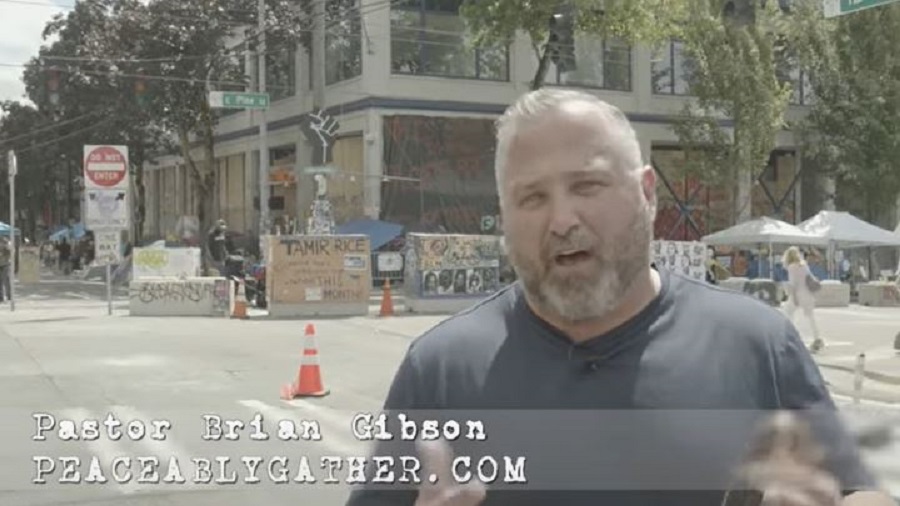 The megachurch pastor and founder of peaceablygather.com who orchestrated a mass church re-opening on Pentecost is at it again.

Pastor Brian Gibson, through peaceablygather.com, coordinated the reopening of 5,000 churches last month during the coronavirus pandemic against local authorities’ wishes that churches remain closed. Since then, Gibson’s been traveling the country, praying in rioting hotspots and witnessing Jesus to those who will listen. Now, he’s fighting against church vandalism and promising to help churches of all denominations protect their property against criminals. In support of that mission, peaceablygather.com launched the Church Defense Initiative.

In a press release, Gibson stated that he’s seen the destruction that violent agitators have carried out against people and property. “These are no longer protests by citizens, these are deliberate acts of violence and vandalism from anti-American groups that seek to undo our country’s history and our religious heritage.” He continued:

Churches will always welcome those seeking refuge and relief, but when evil people attempt to damage and destroy we will exercise our full legal rights, as well as our rights to defend ourselves and our properties with physical force. History is full of examples that when religious images and symbols are attacked what follows shortly thereafter is attacks on the people, and we will not allow that to happen in our communities.

The Church Defense Initiative is a declaration that:

The Call for Vandalism

Last week, Shaun King, Black Lives Matter activist, tweeted that statues of a white Jesus should come down. He also called for murals and stained glass windows in churches to be destroyed.

All murals and stained glass windows of white Jesus, and his European mother, and their white friends should also come down.

They are a gross form white supremacy.

They should all come down.

Gibson explained that statues of Jesus rendered by artists of various cultures are not uncommon. “Cultures of every kind have used depictions of Jesus that look like them so they could connect to him. If you go to a black neighborhood you’ll see a black Jesus; Hispanic neighborhood, a Hispanic Jesus; a white neighborhood, a white Jesus; an Asian neighborhood, an Asian Jesus.”

In response to the call for church desecration, Gibson called for pastors to defend all churches to the fullest extent of the law. “We need to defend these places and not allow our Christian heritage to be erased in America. It’s time to stand for Him.”

He told The Stream in an interview that he recently returned from CHOP. “I’m with other pastors, African-American pastors as well. And all of us are saying, ‘Hey churches, you don’t have to allow people to destroy your church buildings. We can protect our property.’ We believe anyone that attacks the house of worship, we’ll do everything within our legal rights to stop that. And also we’re going to push for the full extent of the law for that person to be prosecuted.”

Some fear the attack on statues will not be the end of it. “Next, they’ll go for the cross,” said Pastor Kedrick Timbo, who met Gibson in the CHOP zone of Seattle to minister to people there. “They’ll claim the cross is whatever and they’ll require you and me to remove the crosses from our churches — or the crosses from our homes.”

Gibson told The Stream that racism is wrong. “I think, absolutely a hundred percent, we need racism under the foot of Jesus and gone from America.” At the same time, he says there are a lot of what he calls “bad actors.” “They’re now using this racial issue to push a Marxist ideology and an anti-biblical ideology on this nation. America needs to wake up and realize what’s happening.”

First Liberty Institute, the largest legal organization in the nation dedicated to defending religious liberty, supports Gibson and will assist him if necessary. “If churches find themselves in a legal bind in that area, they should call [First Liberty] and they’ll give them free legal counsel. And what a blessing that is to the church in America.”