Today is the Feast Day of the Archangels, Michael, Gabriel and Raphael. First, let’s talk about angels.

Angels are spiritual beings believed to act as messengers of God. Archangels are the highest-ranking angels in the celestial hierarchy, with angels beneath them who they guide. There are only three archangels: Michael, Gabriel and Raphael, and we celebrate them today. 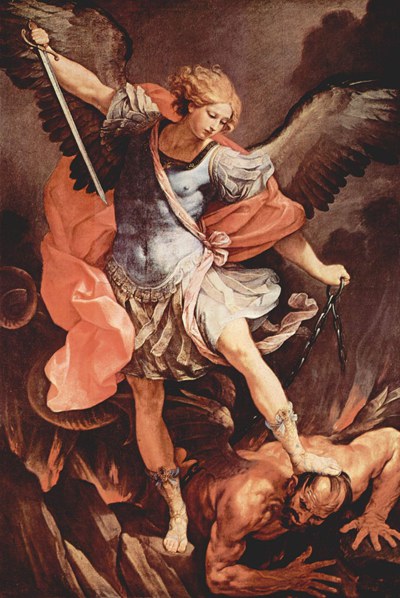 The name Michael means “Who is Like God?” which was also the battle cry of the army of heaven. This is fitting since, as a warrior angel, he led the forces of heaven to a victory over the powers of hell. Perhaps this is why he is described in the Bible as “one of the chief princes.”

Today, he is recognized as the patron saint of many who put themselves in danger to help others; Police, EMT, Ambulance Drivers, and Soldiers.

Like John, St. Matthew also authored a Gospel account, and so likewise is usually depicted holding a large Book. Whether in portrait or in Icons depicting Biblical scenes, Matthew has long, wavy, white beard and closer-cropped hair. As a deliberate anachronism to aid identification, he may also be shown holding the Gospel Book in Icons with Christ depicting Biblical scenes. Matthew may sometimes be shown with a winged man, the symbol associated with his Gospel.

A common, but simple, prayer to St. Michael the Archangel:

St. Michael the Archangel, defend us in battle.
Be our defense against the wickedness and snares of the Devil.
May God rebuke him, we humbly pray, and do thou,
O Prince of the heavenly hosts,by the power of God, thrust into hell Satan, and all the evil spirits, who prowl about the world seeking the ruin of souls. Amen. 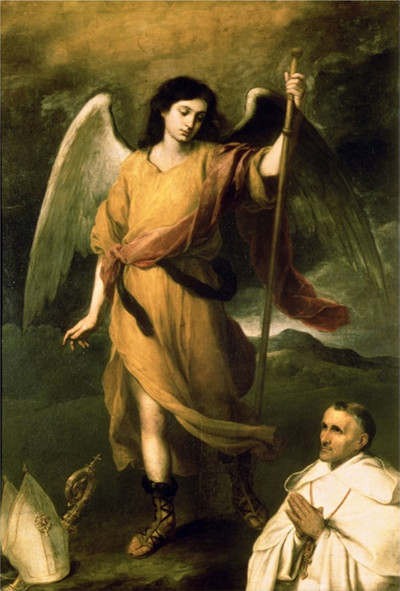 The name Gabriel means “man of God” or ”God has shown himself mighty.” He is perhaps best known for the annunciation, when he announced the incarnation to Mary, but he also appeared to Zechariah to announce the birth of St. John the Baptizer. This is why, today, he is known as the Patron Saint of communications workers.

A prayer to St.  Gabriel:

Blessed Saint Gabriel, Archangel We beseech you to intercede for us at the throne of divine mercy: As you announced the mystery of the Incarnation to Mary, so through your prayers may we receive strength of faith and courage of spirit, and thus find favor with God and redemption through Christ Our Lord. May we sing the praise of God our Savior with the angels and saints in heaven forever and ever. Amen. 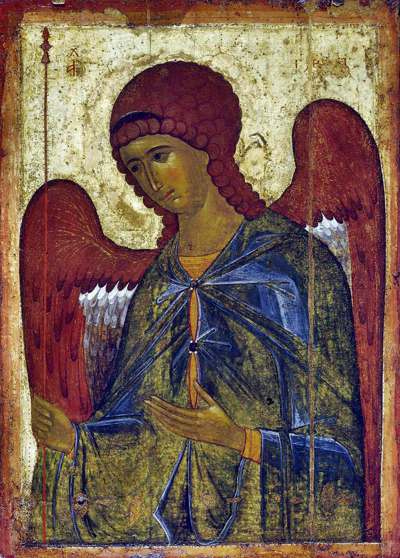 Raphael means “God Heals,” a fitting name for the angel of healing. In the Bible, he is shown to heal people from afflictions both mental and physical with great compassion. St. Raphael is often depicted carrying a scepter, a reference to his guardianship of pilgrims on their journeys. Known for the healing of Tobit with the fish’s gall, he is also often depicted holding or standing on a fish.

A prayer to St. Raphael:

Blessed Saint Raphael, Archangel, We beseech thee to help us in all our needs and trials of this life, as thou, through the power of God, didst restore sight and give guidance to young Tobit.We humbly seek thine aid and intercession, that our souls may be healed,our bodies protected from all ills, and that through divine grace we may be made fit to dwell in the eternal Glory of God in heaven. Amen.

In honor of The Feast of the Archangels, the following is a prayer to all three of them:

Heavenly King, You have given us archangels to assist us during our pilgrimage on earth. Saint Michael is our protector; I ask him to come to my aid, fight for all my loved ones, and protect us from danger. Saint Gabriel is a messenger of the Good News; I ask him to help me clearly hear Your voice and to teach me the truth. Saint Raphael is the healing angel; I ask him to take my need for healing and that of everyone I know, lift it up to Your throne of grace and deliver back to us the gift of recovery. Help us, O Lord, to realize more fully the reality of the archangels and their desire to serve us. Holy angels, pray for us. Amen.