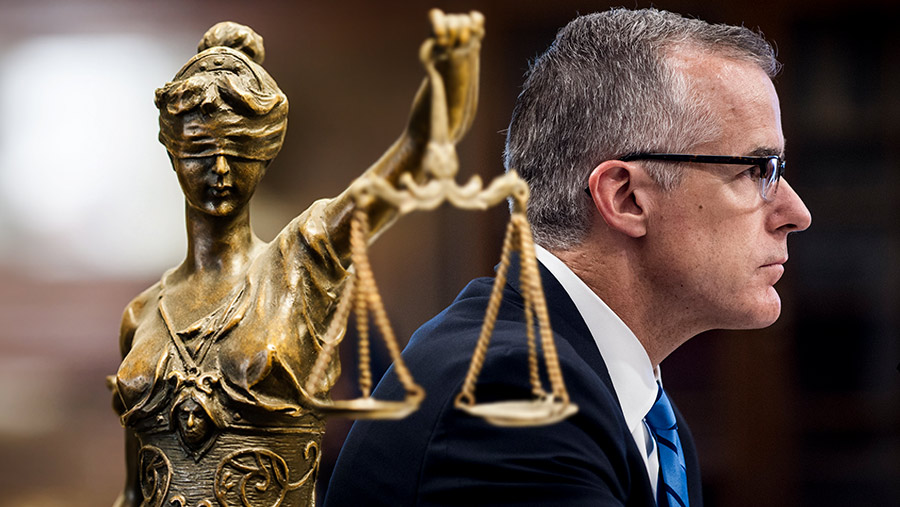 Boy, is it a hot jobs market. How hot is it? The pickings are so slim for employers, CNN was forced to hire a guy fired from his last job for lying. Repeatedly. A guy currently under criminal investigation for crimes against the state. Yes, I’m talking about former Deputy Director of the FIB … I mean FBI … Andrew McCabe.

Of course the hire makes perfect sense. Who is more suited for CNN than a liar who told his colleagues “First we f*** Flynn, then we f*** Trump”? The man in whose office the “insurance policy” to sabotage and stop Trump was hatched? He couldn’t be more CNN material if he grew a beard and called himself “Wolf.” Or lost 50 IQ points and got irate when you called him “Fredo.”

But how long McCabe will enjoy the analyst gig is anyone’s guess. McCabe has been referred for prosecution by the DOJ’s Inspector General. The New York Times broke the story. The particular charge being debated? Lying to investigators about his leaks to the Wall Street Journal. The Feds are in the final stages of deciding whether to file charges or not.

McCabe’s lawyers met recently with DOJ attorneys who would handle a prosecution. Fox News calls this an “indication of a possible indictment.” Writing at the Lawfare blog, Benjamin Wittes agrees, saying such meetings usually indicate charges are “imminent.” Insiders at Justice also tell Fox News McCabe has a “target on his back” because of his assorted shenanigans both with the Clinton investigations and the Trump Russia investigation.

However, The New York Times thinks McCabe will end up not being prosecuted for lying because there is a grand jury witness who undermined the government’s case. Wittes suggests this is Lisa Page, who testified that McCabe didn’t need to lie since he already had the authority to leak. Funny. Michael Flynn had the authority to talk to the Russian ambassador and thus no reason to lie either. And his interviewing agents thought he was being truthful. But that didn’t stop him from being prosecuted.

Still, we know there’s a double standard. McCabe may well avoid prosecution for his lack of candor. If you’re connected to Trump, you’re prosecuted for lying. If you’re part of the anti-Trump elite you can lie to agents and skate like Dorothy Hamill.

(As a side note, if McCabe isn’t lying, that means fired FBI director James Comey is. He says McCabe didn’t get permission to do the leaking he did.)

Whatever. Besides, what’s a little fibbing among friends compared to seditious conspiracy?

Perhaps your heart’s not ready to accept the reality of the soft coup effort against Trump. Will you settle for FISA abuse? Sean Hannity confirmed Monday night that Inspector General Michael Horowitz’s investigation into the FBI/DOJ’s abuse of the FISA court is complete. Joe DiGenova claims that report will expose all four of the FISA warrants that allowed the Obama Administration and FBI to spy on the Trump campaign. They were illegal.

McCabe’s one of those who signed off on the warrants. Lying to agents about his leaks is just the start of McCabe’s legal headaches.

What Did He Leak About Anyway?

Here’s the fun part. Does anyone ever bother talking about what McCabe leaked to the WSJ? His new comrades at CNN certainly won’t. WSJ was running a story confirming for the first time the FBI had been investigating the Clinton Foundation. In the story, unnamed agents claimed McCabe was blocking their investigation. McCabe’s leak was to counter those claims. In essence, McCabe told the WSJ he didn’t block the investigation. In fact, he was protecting the FBI from Attorney General Loretta Lynch. She was the one hellbent on shutting down any attempt to examine the Clinton Foundation.

McCabe would later tell the IG of Lynch’s fury at agents in New York. She was ticked at leaks about the Clinton Foundation — thus Hillary and the Anthony Weiner laptop — and the Eric Garner case. As we know, McCabe and Comey refused to act on the discovery of Weiner’s laptop for roughly four weeks, hoping to wait out the election. However, the agents in New York were getting increasingly frustrated and loose-lipped. They don’t seem to be the only ones.

An outraged Attorney General Lynch allegedly called up and threatened the NYPD. If they didn’t stop leaking about the laptop, she was going to bring federal charges against the cops involved in the death of Eric Garner. See how this banana republic stuff works?

McCabe’s sworn testimony lines up with a story that came out days before the election about what was found on Weiner’s laptop. Reread the amazing thread from Tracy Beanz that ties the threads together. Horrified by the contents discovered, the NYPD was apoplectic that the FBI wasn’t moving on it. (Just as the FBI agents in NY were furious the higher ups in Washington were sitting on it to protect Hillary.) They apparently started talking to their pal, former Mayor Rudy Guiliani. As a Trump surrogate, Rudy hinted that “big surprises” were about to drop.

The story goes an outraged Attorney General Lynch called up and threatened the NYPD. If they didn’t stop leaking about the laptop, she was going to bring federal charges against the cops involved in the death of Eric Garner. See how this banana republic stuff works?

Again, the story sounded off-the-wall when it broke right before the election. But McCabe’s sworn testimony has the same basic elements: Loretta Lynch, a furious call to NY, leaks, law enforcement upset enough about FBI leadership sitting on the Weiner laptop they began leaking about it, the Clinton investigations and the odd, added element of Eric Garner.

One more thing to keep in mind. McCabe threatened that if he went down everybody was going down. You don’t say that unless you are talking about your high-level peers and superiors. That not only means Lynch. That means Comey, whose testimony already contradicts McCabe.

That could also mean their boss, Barack Obama, who McCabe’s right hand Lisa Page says “wants to know everything we are doing.” Yes, the Department of Justice putting the squeeze on McCabe could prove very interesting. He’ll sing like Taylor Swift.

By the way, has anybody ever answered what the FBI folks cataloging the computer contents in categories meant by “Crimes Against Children”? Maybe CNN will think to ask their new man-on-the-scene Andrew McCabe.