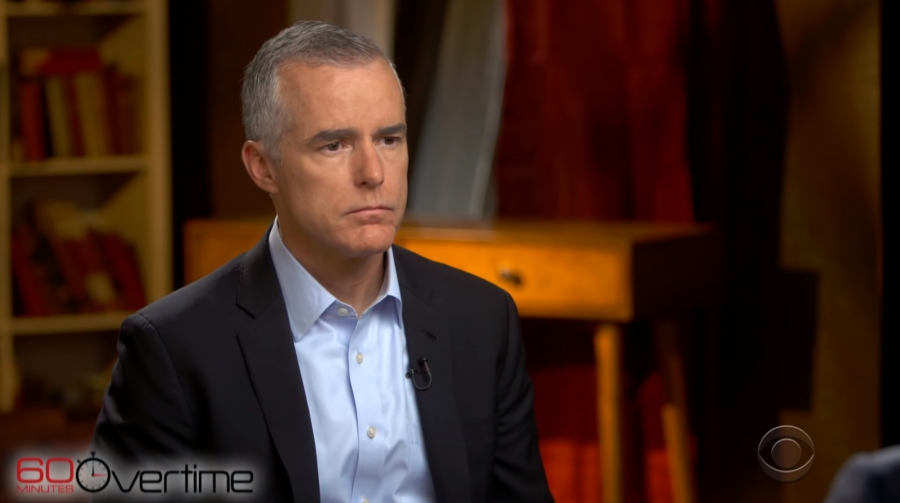 “You have such a fervent, passionate evangelical faith in this country — why in the name of God don’t you have any faith in the system of government you’re so hell-bent to protect?”  — President Jordan Lyman to coup-leader General James Matton Scott, Seven Days of May

In the classic thriller Seven Days in May, Cabinet members team up with powerful military leaders in an effort to overthrow a U.S. president who stands in the way of their agenda.

Last night on 60 Minutes we learned even more about the very real Eight Days in May 2017, when powerful government figures sought to join with Cabinet members to overthrow the President of the United States.

Disgraced former FBI Deputy Director Andrew McCabe revealed, “There were meetings at the Justice Department at which it was discussed whether the vice president and a majority of the cabinet could be brought together to remove the president of the United States under the 25th Amendment.”

The 25th Amendment is solely designed as a mechanism to remove a president if he has become physically or mentally incapacitated. President Trump suffered no such incapacity. McCabe wasn’t even suggesting such an incapacity.

Liberal legal legend Alan Dershowitz put it plainly. “Ousting Trump via the 25th Amendment is clearly an attempt at a coup-d’etat.”

According to McCabe, Deputy Attorney General Rod Rosenstein wanted to collect evidence for a 25th Amendment claim by wearing a wire into the Oval Office and recording the President of the United States.

“He was not joking. He was absolutely serious.” pic.twitter.com/bGbk0FGryu

When the story broke last September about Rosenstein offering to wear a wire, the DOJ official said he was just being sarcastic. McCabe insists this was not the case. In fact, added McCabe, “He brought it up at our next meeting.”

Now, Rosenstein via the DOJ has issued a carefully worded denial — one so full of holes you could run a marching band through it.

Justice said, “The deputy attorney general never authorized any recording that Mr. McCabe references.” (Emphasis added. All this means is he didn’t go through with it. Or if he did it’s off the books.)

As for wanting to use the 25th Amendment to rid themselves of the Troublesome Trump:

As the deputy attorney general previously has stated, based on his personal dealings with the president, there is no basis to invoke the 25th Amendment, nor was the DAG in a position to consider invoking the 25th Amendment.

Exactly. Justice is making Dershowitz’s case this was a coup attempt. (Hmm. I wonder if this is deliberate? After all there’s a new sheriff in town.)

First, there was no basis to invoke the 25th Amendment. Yet Rosenstein and cohorts wanted to push for it, given that is one of the few avenues for removing a president.

Second, a deputy attorney general is not “in a position” to consider invoking the 25th Amendment. That’s a cabinet level decision. It’s not the business of Rosenstein. Yet, according to McCabe, Rosenstein and cohorts were making it their business.

But, one might say, McCabe was fired for lying repeatedly to investigators. How do we know he’s telling the truth now? We don’t know for sure. However, according to Fox News, former FBI General Counsel James Baker backs McCabe’s account. Baker told Congressional investigators McCabe relayed that Rosenstein was so serious he was actually tabulating which cabinet members would back him.

I was being told by some combination of Andy McCabe and Lisa Page, that, in a conversation with the Deputy Attorney General, he had stated that he … had at least two members of the president’s Cabinet who were ready to support, I guess you would call it, an action under the 25th Amendment.

Now, did McCabe launch an investigation into Rosenstein for such a clearly dubious suggestion? Did he go to then-Attorney General Jeff Sessions? Did he warn Trump his deputy attorney general wanted to secretly record their conversations to convince cabinet members to invoke the 25th Amendment? No. Of course not. Because as Andrew McCarthy points out, the McCabe-Rosenstein meeting with other leading DOJ officials was all about determining a way to get rid of Trump.

They protected Hillary in 2016. They spied on and attempted to undermine Trump’s campaign. They, in partnership with the Obama White House, went into overdrive after the election to sabotage the president-elect. The leaks, the unmaskings, the framing of Gen. Michael Flynn, giving CNN the hook it needed to run with the fake Steele Dossier. Former Obama staffers, John Brennan and his CIA agents, spreading far and wide through Capital Hill and the media that the dossier was “100% true.” A dossier that, according to DOJ official Bruce Ohr, everyone from the top brass on down knew was garbage paid for by Hillary.

And then Trump fired James Comey.

As recounted in my Eight Days in May, Part One, leadership at DOJ and FBI went into panic mode. No wonder. The writing was on the wall. Hillary had lost. She was never supposed to have lost. And now Trump was on the march. Trump even asked McCabe if he was one of the resisters. (Trump already knew the answer. He had known since NSA director Mike Rogers paid an unauthorized visit to Trump Tower shortly after the election to let him know what was going on.) Their schemes were in jeopardy of coming to light.

Their options were slight.

As we’ve seen, the coup attempt via the 25th Amendment was considered. However, the idea was abandoned.

So what to do?

In Comes the Mueller Special Counsel

The FBI had also been working for months and months investigating Trump-Russia collusion and were coming up empty. And remember, thanks to their FISA warrants, the FBI was scooping up infinite data on Trump and his campaign. They had it all — yet still had nothing.

Nevertheless, during those Eight Days in May McCabe launched another counter-intelligence investigation against Trump. He claimed Sunday night his decision was based on comments Trump made about Putin. Let that sink in. Because of Trump’s words, because McCabe didn’t like what he was hearing due to his own political biases, McCabe instigated yet another investigation into the President of the United States.

McCabe admits he wanted the new investigation underway and locked in in case he was next on the chopping block.

McCabe also launched an obstruction of justice investigation into Trump. This too was a sham. How do we know? McCabe himself said so under oath. Credit Gateway Pundit for catching this. Just one day after McCabe launched this investigation, he told Congress Trump had every right to fire Comey. His exact words from the transcript: “You know it was completely within the president’s authority to take the steps that he did. We all understand that.” Investigating someone for a crime you know he’s innocent of?

The direct coup via the 25th Amendment was abandoned. Rosenstein wouldn’t wear a wire to secretly record the president. Rather, if they could not decapitate the president, they would paralyze him with the Russia investigation.

Rosenstein dropped the wire and dropped a call to Comey’s pal the former director of the FBI Robert Mueller. They’d all been in the trenches together for decades.

Rosenstein appointed Mueller as Special Counsel. The move was sold as an investigation into what Russia did during the election. Who ever believed that, though? Even CNN reported in December the naming of Mueller wasn’t about Russia. Sources told the network it was about “controlling” Trump. (CNN’s own story was quickly buried. Just like the news the bipartisan Senate Intelligence Committee has found no direct evidence Trump-Russia collusion.)

Mueller picked up the McCabe-FBI investigation. He grabbed a squad of people who had been involved in both the Clinton whitewash and the Russia hoax. Peter Strzok didn’t even want to join because he already knew there was “no there there.” He’d already spent numerous months in a desperate search for Trump Russia dirt. But in the end, he too signed on with Mueller.

For two years, Mueller has played his part. Still nothing on Trump. (But massive military style raids on old political hacks teed up with CNN and timed for morning drive.)  Still collecting tidbits that can be fed to Adam Schiff to use in Democratic investigations to carry out their impeachment drive.

One way or another, whether a direct coup or silent coup, the resistance, the “insurance policy” must not be deterred. Trump must be done away with. It cannot be left for the voters.

Eight Days in May … How Does It End?

How does the Eight Days in May movie end? Sen. Lindsay Graham wants both McCabe and Rosenstein to testify under oath about this 25th Amendment business.

We await the Department of Justice Inspector General’s report on the assorted DOJ/FBI shenanigans with the Russian investigation.

The president himself calls what was revealed by McCabe Sunday night “illegal and treasonous.”

Will there be justice? Will those who plotted to overthrow the president face the music? Will the depths of the seditious conspiracy be exposed no matter how high it goes?

Or do the machinations of the McCabes and Rosensteins and Comeys and Strzok (and Brennans and Clappers and Obama White House and Deep State) carry the day? And carry America away with it?

We end where we began. With the classic movie Seven Days in May, and a line that is as true and timely as any ever uttered on film.

“All you’ve got to know is this: Right now the government of the United States is sitting on top of the Washington Monument, right on the very point, tilting right and left and ready to fall off and break up on the pavement.”

Al Perrotta is the Managing Editor of The Stream, and co-author of the counter-terrorism memoir Hostile Intent and The Politically Incorrect Guide to Immigration. You can follow him at @streamingal.