May Mikhail Sergeyevich Gorbachev Rest in Peace. He Was the Anti-Biden 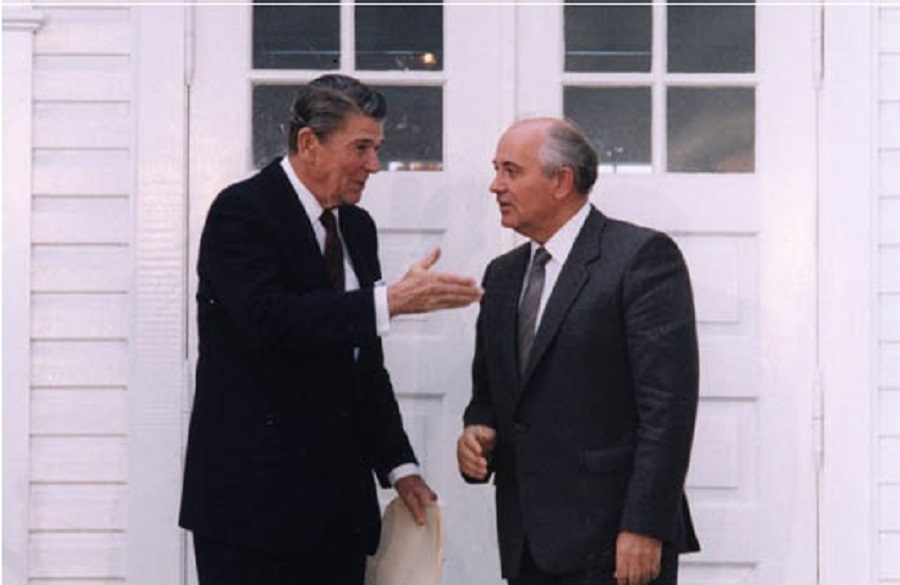 When I heard that he’d died, I found my eyes welling with tears. I realized that Mikhail Gorbachev had made an enormous difference to my life, to all of our lives. He enriched them immeasurably, at the cost of ruining his own. “Greater love hath no man,” I thought, and said a quick, fervent prayer for his soul.

Here was a man who grew up in the heart of the godless, authoritarian Soviet system, and rose to its top. Who believed in the ideals which it had taught him, even as his family had suffered under Stalin. He survived the viciously Machiavellian world of Soviet politics, and rose to supreme power over one of the world’s two superpowers.

But once he held that power, unlike each of his predecessors, Gorbachev didn’t spend his time and energy clinging to it for its own sake. (Rent the black comedy The Death of Stalin for a truthful, satirical look at the internal hatreds and rivalries that plagued the Soviet system.) Nor did he grasp at the power his nation wielded to dominate others, throughout eastern Europe and much of the Third World.

Imagining a Humane Socialism. Of Course it Proved Imaginary

Instead, Mikhail Gorbachev looked honestly at the poisonous effects that Marxist socialism was having on his Russian homeland, and the satellite states it commanded. He saw the vast economic irrationalities, the deep corruption, the paranoid fear of openness and new ideas. And he believed he could change things, could return the vast socialist empire to the humanistic ideals that lay so deeply buried at its origins.

Gorbachev read the Utopian poetry of the young Marx and sought to recover that vision and make it real. He dismantled much of the apparatus of oppression that held the Soviet empire together, and encouraged his fellow Communist leaders in the East to do the same.

Of course he failed. Socialism isn’t really humanistic after all, but subhumanist. It gets the human species wrong, and even our phylum, mistaking our mammalian kind for some kind of social insect, like a termite. (Just so, secular libertarians propose a political system perfectly suited for lizards who breed by hooking up briefly and randomly, then abandon their eggs in the sand.)

He Wouldn’t Punish His People

Many, many political leaders over millennia have dared greatly and failed, pointed their nations to dreams that turned out to be mere fantasies. Typically, such leaders prodigally poured out the lives of their helpless subjects, in vast schemes of conquest or impossible reforms. When their programs failed, they stormed at and punished their citizens for “failing” them, for not living up to the grandeur of their visions.

So Hitler in his bunker cursed the Germans for proving “unworthy” of him, and Mao at the hapless Chinese who insisted on starving to death in their tens of millions. So did Hillary Clinton and her party, who raged that the American people stabbed them in the back with their votes in 2016.

From the Brink of Nuclear War to Peace Talks with Reagan

Not Gorbachev. He doggedly tried to implement his new, impossible “socialism with a human face,” and mostly resisted the massive pressure of the men all around him to resort to deadly force when it kept failing. He emerged from a Soviet elite so angst-ridden and panicky that it came within a hairsbreadth of launching a pre-emptive nuclear strike in 1983 that would have killed hundreds of millions — you and me included. (See the sobering history book 1983: Reagan, Andropov, and a World on the Brink to see how close we came.)

But Gorbachev, attaining power, was willing to negotiate honestly with the same President Reagan, pulling both powers back from their previous war footing, and seeking genuine arms control and a lasting peace.

He Wouldn’t Send in the Tanks

In 1989, when Communist governments started collapsing all over Europe, Gorbachev could have sent in his troops. In fact, millions of Russians today still think he should have, for the sake of preserving not Communism, but Russian power. But Gorbachev wouldn’t. Against his wishes and in the ruins of his own socialist dreams, he allowed the people of East Germany to answer Reagan’s call and “tear down this Wall!”

Again in 1991, after a coup attempt by hardline Communists that almost claimed his life, Gorbachev again did not use what power he still had to crush his enemies, such as Boris Yeltsin. In a series of moves that got him widely despised by Russians as a weakling, he permitted the Soviet system to vote itself out of existence. Then went on to a life of relative obscurity, his conscience clean.

Contrast that with how the rulers of China behaved in 1989, when democracy protests swept their country. They crushed it with tanks and drowned it in blood. Perversely, that seemed to win the respect of Western leaders, who went right on doing business as usual with their regime.

Toward Russia, our leaders behaved like Machiavellian strategists. We took full advantage of Russia’s collapse to violate our promises, and push our NATO alliance right up to its borders — as if the Russians were some conquered, rum-soaked tribe of American Indians whose hunting grounds we coveted. Western advisors like Jeffrey Sachs flew over to Russia, and help set up a system that let old Communist apparatchiks steal most of the country’s wealth. We crowed about our “unipolar” moment of unchallenged American power, even as Russians saw their life expectancies plummet, and China rearmed much faster than Hitler in the 30s.

Today, our own oligarchy is clinging to power much more ruthlessly than Gorbachev ever did. The Biden regime, unlike Gorbachev’s, is holding political purge trials and raiding opponents’ homes. Instead of releasing political prisoners as Gorbachev did, Biden is collecting more of them. He’s going on TV denouncing his rivals as “fascists,” sounding for all the world like a North Korean propaganda broadcast.

Perversely, we might see Biden as the mirror image, anti-Gorbachev. One came up in a system of tyranny and injustice, rose to power honestly, then peacefully dismantled it. The other clawed his way to the top of a once-just, once-free system, and is leading its transformation into a failing one-party state. As I found myself observing, when I first heard the news of his passing:

A historical irony: Gorbachev dies just as Biden’s Putinism has rendered America almost exactly as unfree as Russia, with a more evil ideology in control.

Prayers please for Gorbachev, and for America’s delivery from a new evil empire.