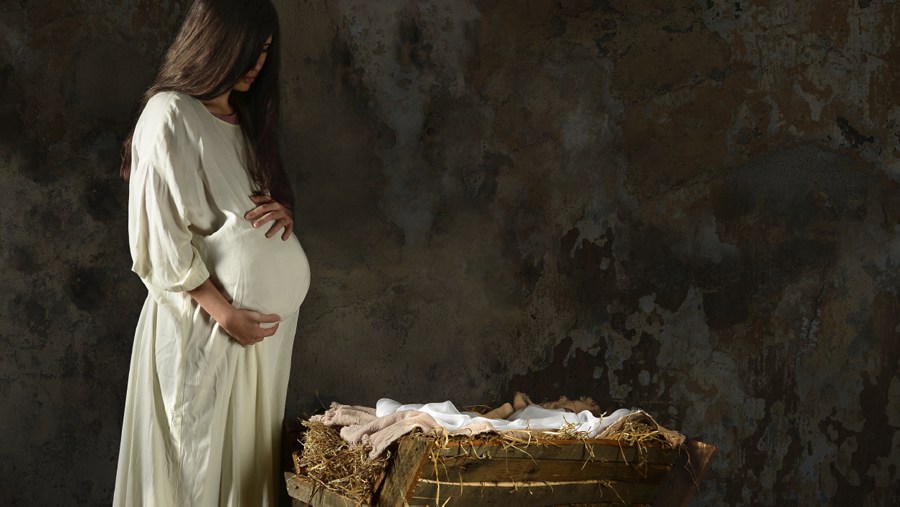 Hers was a “yes” of faith. A “yes” of courage. A “yes” of blessing and unforeseen suffering. Above all, it was a “yes” of surrender. In one brief moment during an encounter with God’s messenger angel, Mary, the future mother of the Savior of the World, said “yes” to God’s will — embracing the mystery of all her “be it unto me” would come to mean.

It’s only natural to wonder what it was about Mary that drew God to her. She was a seemingly ordinary girl from small-town Nazareth in Galilee. There was nothing about her social status or upbringing that, to the naked eye, would have flagged her as the “favored one” through whom Almighty God would choose to birth the long-awaited Messiah.

Yet In this beautiful and profound twist of irony woven throughout the entirety of Scripture, God once again glorifies Himself through the narrative, making the humble of this world strong. It is not actually who Mary is — but rather who God is to Mary — whereby we witness the unfolding of the Incarnation. God’s master plan to save mankind birthed through a simple girl who said “yes.”

Blessed Is She Who Believed

Reading through the account found in Luke 1:26-56, we watch Mary’s encounter with the Angel Gabriel unfold. Gabriel lays out a plan so incredulous it would be hard for anyone to believe. He tells Mary that she would conceive in her womb and bear a son that would be great and called the Son of the Most High — “and of His kingdom there will be no end” (Luke 1:31-33).

The caveat? Mary was still a virgin. She asks Gabriel what we would be thinking too: “How will this be, since I am a virgin?” (v. 34). It’s at this life-changing juncture that Mary demonstrates something extraordinary in her response. It would seem that her question of “how” was coming from a place of clarification, not doubt. By faith and in reverence to Almighty God, her heart had already said “yes” to not only what — but who — was about to be conceived in her womb.

It wasn’t about who she was or wasn’t. Who could’ve would have been a better choice. She didn’t make it about her education, lineage, perceived self-worth or lack thereof. It was about God and God only: His plan, His will, His way. And that’s what made her “yes” so extraordinary.

All-in, unconditional, and without reservation, Mary’s “yes” showed that she completely trusted the Word of the Lord and the Lord of the Word. Several months later, her relative Elizabeth commended her by saying, “Blessed is she who believed that there would be a fulfillment of what was spoken to her from the Lord” (Luke 1:45).

Embracing the Role of a Handmaid

Just before Gabriel left her, Mary said, “Behold, I am the servant of the Lord; let it be to me according to your word” (Luke 1:38). Mary saw herself as God’s servant, one who worships God and submits to Him. The Greek word for servant used here is “doulē” which means bondslave or handmaid. Mary presented herself to God out of a lowly position, one of servitude, weakness and dependence. Such a response demonstrated how God would choose to show strength with His arm, scatter the proud in the thoughts of their hearts, and exalt those of humble estate (Luke 1:51). These were the words of Mary herself — pouring out of her spirit in the Magnificat shortly after saying yes to God’s will for her life.

Another definition is “one who gives himself up wholly to another’s will.” Mary personified this. Her “be it unto me” becoming the death knell to the self-life. It was no longer about her, nor could it ever be again. Whatever her “yes” meant, that would she live. Mary’s “yes” would bring her to the mountaintops of supernatural breakthrough and into valleys of suffering.

Her “yes” made her the very first eye witness to what the presence of Jesus does to a life, causing that which is impossible with man to become possible with God. She watched God do the extraordinary again and again. Shepherds rushing to Bethlehem to tell of a multitude of heavenly host praising God over her son’s birth (Luke 2:16-19). Wise men from afar falling down and worshipping the Godchild (Matthew 2:11). Simeon and Anna prophesying Jesus’ destiny when he was presented in the temple (Luke 2:28-38). All of these things building her own faith as she herself came to believe, years later, that her son could — and would — turn water into wine (John 2:5).

Her “yes’ also led her to the foot of Calvary, to endure unimaginable suffering, pain and loss as she watched her innocent, firstborn Son die an excruciatingly agonizing death as a criminal, abandoned by His closest friends (John 19:25). It was a mother’s worst nightmare. This, too, came to be the price of her unconditional “Yes.”

Emptied to be Filled

Mary continued to treasure “all these things,” pondering them in her heart (Luke 2:19, 2:51). She knew what she witnessed was God … all God. Emptied of herself, she became filled with God Himself. She is the only person in all of history that can literally, not figuratively, say, “Christ in me, the hope of glory” (Colossians 1:27).

Mary’s extraordinary “yes” can be our extraordinary “yes.” The Jesus that grew inside her wants to grow inside you and me. He wants to so fill us with Himself that wherever we find ourselves, we will say like Mary, “Be it unto me,” and then rest in His ability to accomplish His word toward us.

Jesus is making us strong in weakness. He is filling the hungry with good things. He is sustaining us through suffering. We echo Mary’s song and declare, “for he who is mighty has done great things for me, and holy is his name” (Luke 1: 46-49).

Starting with our “yes.”